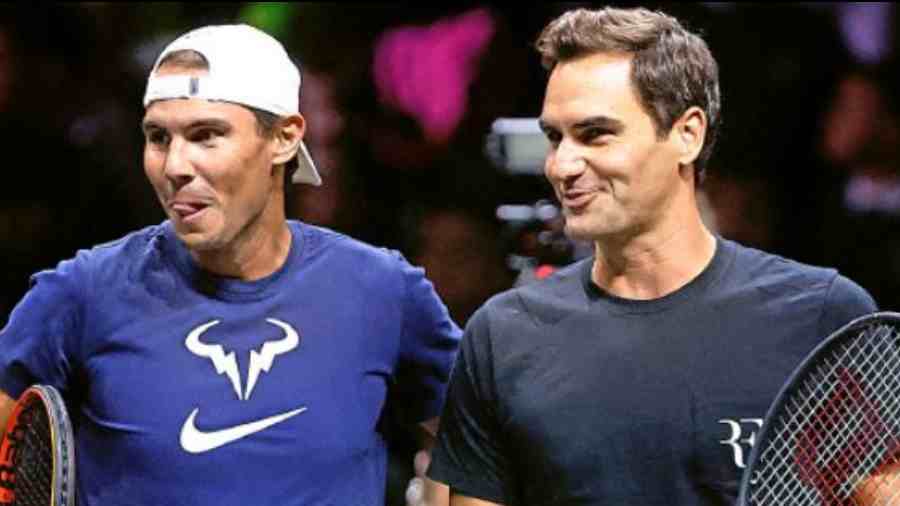 Some of the most iconic moments of Roger Federer’s glittering career featured Rafael Nadal across the net but on Friday his great Spanish rival will be alongside him for his final bow.

The 41-year-old Federer, winner of 20 grand slam titles and for many the greatest player to wield a tennis racket, is back in one of his favourite cities to bring down the curtain on a 24-year professional career that scaled staggering heights.

He will partner Nadal for a doubles match on the opening day of the Laver Cup at London’s O2 Arena — a three-day team event in which Europe takes on the Rest of the World. Federer announced last week that the Laver Cup would be his final competitive event having failed to overcome a nagging right knee issue that required multiple surgeries.

While that injury means he is unable to feature in a singles match here, he will conclude the opening day alongside Nadal, record 22time grand slam men’s champion, as they face the American duo Jack Sock and Frances Tiafoe.

As farewells go, it simply could not be better. Federer played Nadal 40 times in one of the most compelling rivalries witnessed in tennis. No quarter has ever been given on the court but despite the ferocity of their duels, deep respect endures.

Which is why Federer said earlier this week that playing with Nadal would be a beautiful way to conclude a career that caught fire when he claimed his first grand slam title at Wimbledon in 2003. Europe’s captain Bjorn Borg, not surprisingly, granted him his wish. “It’s going to be a different kind of pressure to be part of this historic moment,” Nadal said.

“It’s going to be something unforgettable for me. I’m super excited. Maybe we can create a good moment and maybe win the match.” Federer cut a relaxed figure as he sat with his teammates, including 21-time grand slam champion Novak Djokovic and twice Wimbledon winner Andy Murray.

But he said the emotions could hit him on Friday. “I’m not sure if I can handle (all the emotions) but I will try,” Federer said.

“This one feels a whole lot different. It’s super special playing with Rafa.”  Nadal was asked to highlight some of his best moments against Federer and not surprisingly picked the 2008 Wimbledon final as one of his most cherished.

The 36-year-old Spaniard also spoke warmly of their enduring friendship: “It’s been a friendly rivalry.”