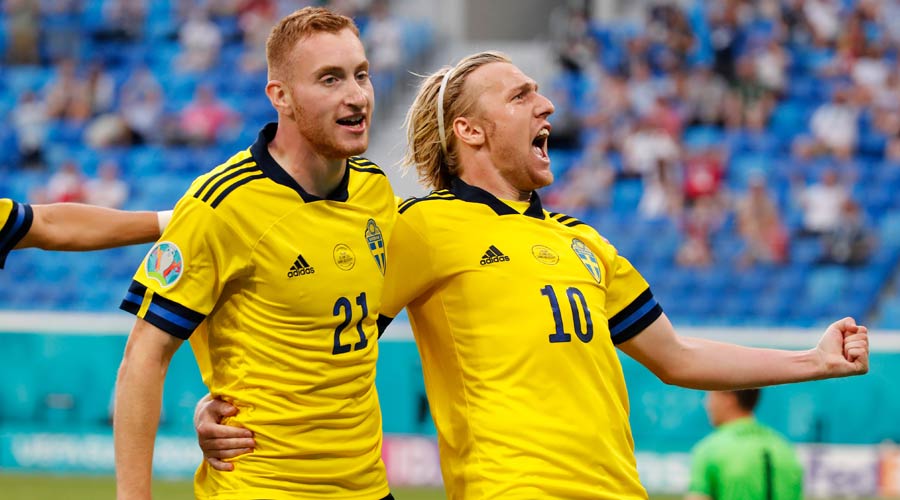 Sweden cruised into a two-goal lead against Poland on Wednesday before being pegged back by a Robert Lewandowski brace, then notching a last-ditch winner to top Group E and send their opponents home from Euro 2020.

Winger Emil Forsberg set the Swedes on their way with two goals, including the second fastest strike in European Championship history, before Viktor Claesson stepped up in the fourth minute of stoppage time to seal a 3-2 victory.

“It was a roller-coaster ride emotionally,” match-winner Claesson told Sweden’s TV4. “We’ll hopefully get a slightly easier opponent in the last 16.”

It was a heartbreaking end to Poland’s campaign following a thrilling fightback in which they twice drew level through talismanic skipper Lewandowski, whose 84th minute strike for 2-2 gave them a surge of hope.

Sweden’s previous two matches were built on robust defensive displays that had cast doubts on whether Janne Andersson’s side could get their attack firing, but they made a blistering start.

After Robin Quaison controlled the ball on the edge of the penalty area, Forsberg collected a pass and took advantage of some poor defending to fire past goalkeeper Wojciech Szczesny with a mere 82 seconds on the clock.

It was the fastest goal in the Euros since Dmitry Kirichenko’s for Russia versus Greece in 2004.

Forsberg doubled their lead with a powerful drive for his third goal of the tournament after substitute Dejan Kulusevski weaved his way into the box to lay it on a platter in the 59th minute.

“It was a crazy start. It meant that they were a little more desperate than us,” Forsberg said.

“They created chances, could have scored, and we had a bit of luck. At 2-0, the game should be over, but they equalised, and their goals came a little too easily. But then we got the third, and now it’s just pure happiness.”

Lewandowski pulled a goal back two minutes after Sweden’s second with a curling shot. Then Jakub Swierczok’s tap-in from substitute Przemyslaw Frankowski’s pass was ruled out for offside after the Video Assistant Referee’s intervention.

Lewandowski fired in the equaliser from close range in the 84th minute after a pass from Frankowski.

Chasing their first victory over Sweden since 1991, Poland pushed on but Sweden withstood waves of pressure before Kulusevski pivoted outside the penalty area and played in Claesson who held his nerve to clip the ball over Szczesny.

“It was 2-0 and as calm as it could be, then they got back into the game,” Claesson added. “From 2-1, there’s always pressure there. It’s hard to do anything but defend in those situations when they have that kind of momentum.”