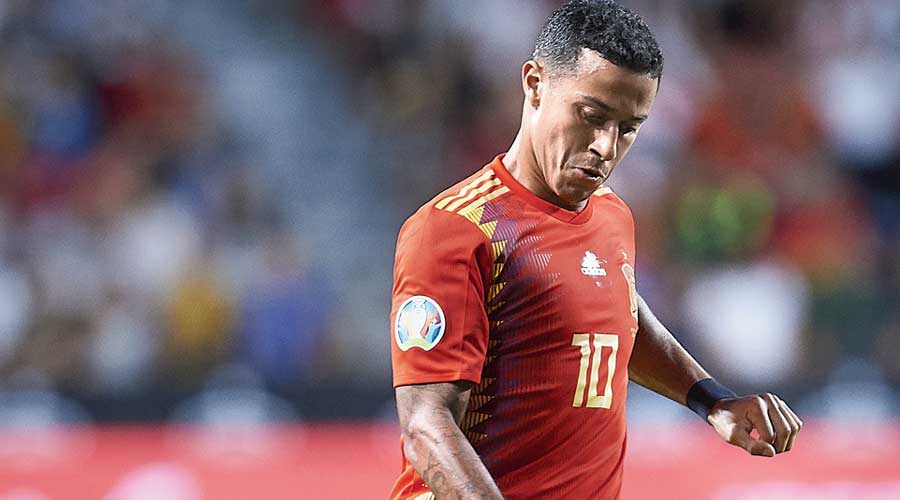 The rescheduled Euro 2020 gets underway in Rome on Friday and runs through to July 11. The semi-finals and final will be played at the Wembley Stadium in London. A total of 24 teams will be playing 51 matches spread over 11 cities.

The Telegraph will dissect the eight powerhouses at this year’s tournament. The countdown begins with Spain and Croatia.

On paper, Spain do not look like having the ammunition to hold aloft the winners trophy at the Wembley on July 11. But the most successful team in the last two decades  — three titles in four years when they left rivals in their wake — Spain will surely grab eyeballs irrespective of depth in their squad or lack of strikers.

Coach Luis Enrique left out inspirational captain Sergio Ramos, whose Real Madrid season was riddled with Covid-19 and injuries. This is also a squad which does not have a single Real Madrid player. Without Ramos, Spain also will not have his iconic No. 15 jersey in this Euro since the players did not wish to wear that out of respect for one of world’s best central defenders.

Thiago Alcantara did not have a good season with Liverpool as Covid-19 and injury kept him out of the loop. But he is the man around whom Enrique is building his new-look team. Thiago will be wearing the No. 10 and along with Sergio Busquets, Koke and Jordi Alba, is one of the elder statesman in a relatively young side. Enrique has included Barcelona’s young and talented midfielder Pedri, but Ansu Fati’s long-term injury has robbed Spain of some fire upfront. It remains to be seen how the likes of Alvaro Morata, Dani Olmo and Ferran Torres perform in this Euro. A lot of interest was generated on who is going to wear the No.9 jersey for Spain. Gerard Moreno, fresh from his Europa League success with Villarreal, will be the No. 9.

With no Ramos, there will be a lot of interest on how the defence holds up in crunch situations. Central defenders Pau Torres, Eric Garcia, Aymeric Laporte, Jordi Alba or Jose Gaya as the left back and Marcos Llorente on the right are in Enrique’s scheme of things. Marcos was a holding midfielder but under Diego Simeone in Atletico Madrid he was transformed into an explosive winger. Under Enrique though he may play as the right back.

In the goalless warm-up match against Portugal last week, Spain did not look convincing enough. They were clearly struggling but their innate talent of moving the ball around was there to see.

⚫ Placed in Group E with Poland, Slovakia and Sweden

The high of the Russia World Cup is still there, but Croatia enter this Euro with not much hope. By coach Zlatko Dalic’s own admission, Croatia’s first target will be to qualify for the Round of 16. “Our latest results were not the best, but I’m an optimist. Our first goal is to get out of the group,” Dalic had said recently.

The likes of Danijel Subasic, Ivan Strinic, Mario Mandzukic and Ivan Rakitic have all bid adieu to the national team and their replacements have not disappointed. The 23-year-old Nikola Vlasic is the most talented amongst the new crop of players. Luka Modric remains the best in midfield but Vlasic, Dalic’s new No. 10, gives hope to Croatia.

At 35, Modric remains Croatia’s icon. He is the face of the Croatian national team. He was tireless and injury-free for Real Madrid this season and that may act as detrimental for Croatia. For all the workload he took for Zinedine Zidane, Modric may suffer from fatigue when the Euro starts. Dalic doesn’t have much choices up front either. Bruno Petkovic is not that consistent due to lack of form and fitness issues. Ante Budimir is there as a back-up.

Expectations from the team are high but the coach is cautious. “Our ambitions are realistic,” he said. “We are still among the 10 strongest (teams) in Europe, but there are many candidates for the throne who are ahead of us.” Of course, the Russian experience — they finished runners- up to France — will be a big plus for the players' mentality. At this point in time they look a bit unstable, but if everything falls into place they will force their critics to eat humble pie.

⚫ Placed in Group D with Czech Republic, England and Scotland