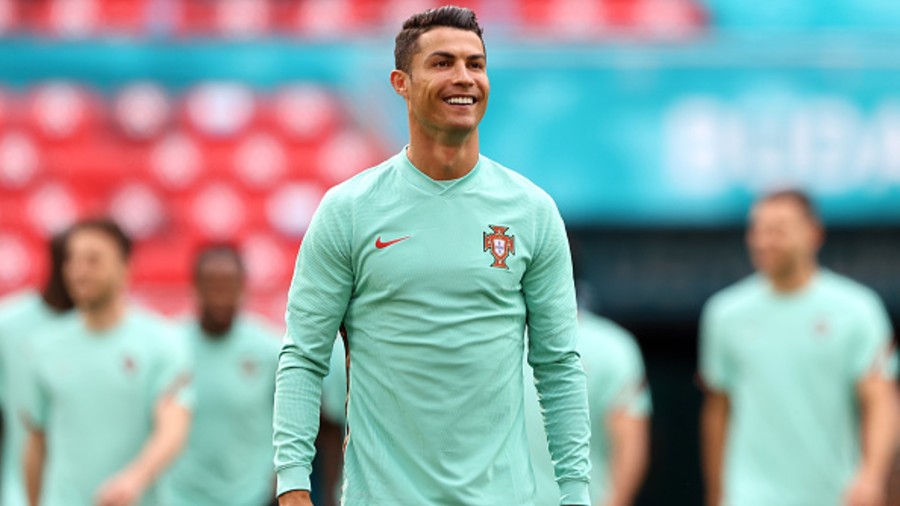 Cristiano Ronaldo smiles during the Portugal Training Session ahead of the Euro 2020 Group F match between Hungary and Portugal at Puskas Arena
Getty Images
Agencies   |   Budapest   |   Published 15.06.21, 03:10 AM

Home advantage at the European Championship may not count for much when Hungary face a Portugal team with scoring talent and one particular player looking to make history, but 67,000 locals at the Puskas Arena will surely try to shout out the defending champions.

Cristiano Ronaldo needs six more goals to become the all-time leading scorer for a men’s national team. If the defending champions go far at Euro 2020, Ronaldo could indeed break Iran striker Ali Daei’s record of 109 goals. And he’ll get his first chance to add to his total on Tuesday against the Hungarians.

Portugal will look to get a head start on Germany and France in a bruising Group F.

Hungary, playing in only their second European Championship in 49 years, are rank outsiders in the tournament’s toughest group but will compensate for what they lack in star names with passion and grit.

The shiny new Puskas Arena is the only Euro 2020 stadium which will be at full capacity after local authorities agreed to exchange social distancing for a strict entry policy, requiring fans to return a negative Covid-19 test to gain access.

It means the likes of Ronaldo and Bruno Fernandes face the prospect of their every touch being booed in Tuesday’s fixture by the Budapest crowd, who will not forgive any slacking off from their side.

“They (Hungary) are a very tough team and won’t let any ball go and will never give up,” said Portugal midfielder Danilo.

“We know what style of play to expect from them and we’ll be preparing well to make sure we’re not in for a surprise.”

“We spent a season without playing in front of fans and we’re not used to it anymore. Hungary will be extra motivated but it’s just another problem we’ll have to deal with.”

Portugal did face a torrid time from Hungary at Euro 2016, falling behind three times before coming back to earn a 3-3 draw and scrape into the knockout stages.