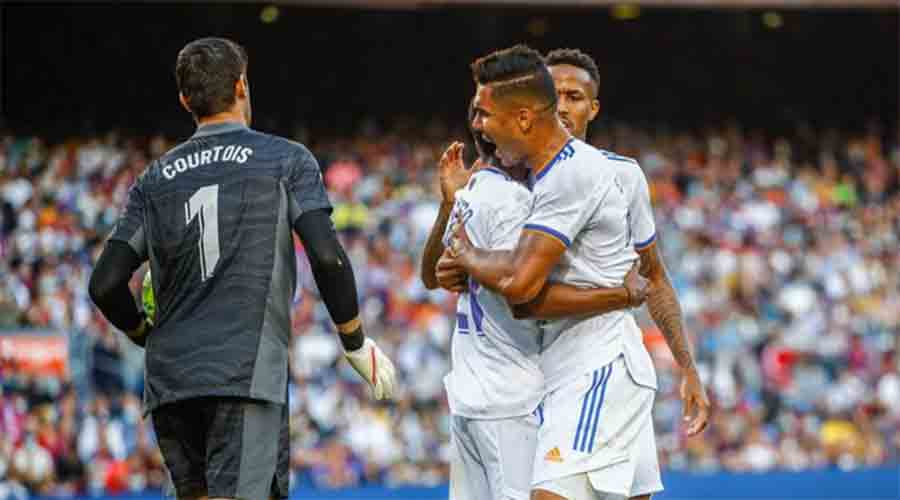 Vazquez added a second goal in stoppage time on a counterattack with Barcelona desperately thrown forward in search of an equaliser.
Twitter/ @English_AS
Agencies   |   Barcelona   |   Published 25.10.21, 03:54 AM

David Alaba and Lucas Vazquez scored as Real Madrid beat Barcelona 2-1 at Camp Nou on Sunday in the rivals’ first Clasico match since the exit of Lionel Messi.

Defender Alaba turned goal-scorer in the 32nd minute with a wonderful curling shot from the left side of the area that the outstretched Marc-Andre ter Stegen could not stop. Alaba’s strike came minutes after American Sergino Dest wasted a great chance for Barcelona, sending his close-range shot soaring over the crossbar.

Vazquez added a second goal in stoppage time on a counterattack with Barcelona desperately thrown forward in search of an equaliser. Sergio Aguero pulled one back for Barcelona on a cross from Dest in the final seconds.

The defeat was another blow to Barcelona who have struggled since their financial troubles kept them from re-signing Messi and other players. This was the first Clasico without Messi and Madrid’s long-time captain Sergio Ramos, who are now teammates at Paris Saint-Germain.

The two between them took part in 45 editions of Spain’s top rivalry. In that time Messi led Barcelona to 19 wins while scoring a record 26 goals for the fixture.

Barcelona’s fans revelled in the first match against Madrid since health restrictions for the pandemic were completely lifted to allow full capacity in the 99,000-seat Camp Nou.

Face masks were mandatory, but they did not stop the stadium from once again rocking with drums, chants and the occasional jeers from Barcelona fans which grew in the final minutes when frustration set in after witnessing another letdown by their team.

Barcelona’s squad from before the pandemic has undergone a major overhaul because of the club’s financial troubles. Where Messi once linked up with Antoine Griezmann on the right flank, Barcelona’s homegrown youngsters Gavi Paez and Oscar Mingueza now team up with Dest.

But one thing that has not changed is Barcelona’s determination to dominate possession. The hosts controlled the pace from the start, but Madrid are more than used to picking their moments when it comes to playing Barcelona. Dest had a golden opportunity to break the initial deadlock in the 25th when he fired high from just outside the six-yard box. Memphis Depay broke down the left flank and squared a pass for Ansu Fati, who touched the ball before it found Dest all alone.

It fell to Ramos’ replacement to give Madrid the lead. Alaba robbed the ball from Depay outside his area and charged forward as part of a quick attack. Two passes later, Alaba looked like a striker when he took aim from an angle and curled a superb strike around Ter Stegen. It was the former Bayern Munich player’s first goal for Madrid.

“That goal was decisive,” said Barcelona midfielder Sergio Busquets. “In games like this, whoever scores first has a big advantage. Games are decided in the area, and we were not effective today (Sunday).”

Vazquez added his goal when he was quicker to a rebound than Eric Garcia, as he slid a foot past the Spain defender to tuck the ball into the net. The goal by substitute Aguero, playing in his third match since joining Barcelona from Manchester City, came far too late to spark a comeback. It is Barcelona’s only goal in defeats to Bayern Munich, Benfica, Atletico and Madrid this campaign.