Advertisement
Home / Sports / Du Plessis: Have lot of confidence as a team

Du Plessis: Have lot of confidence as a team 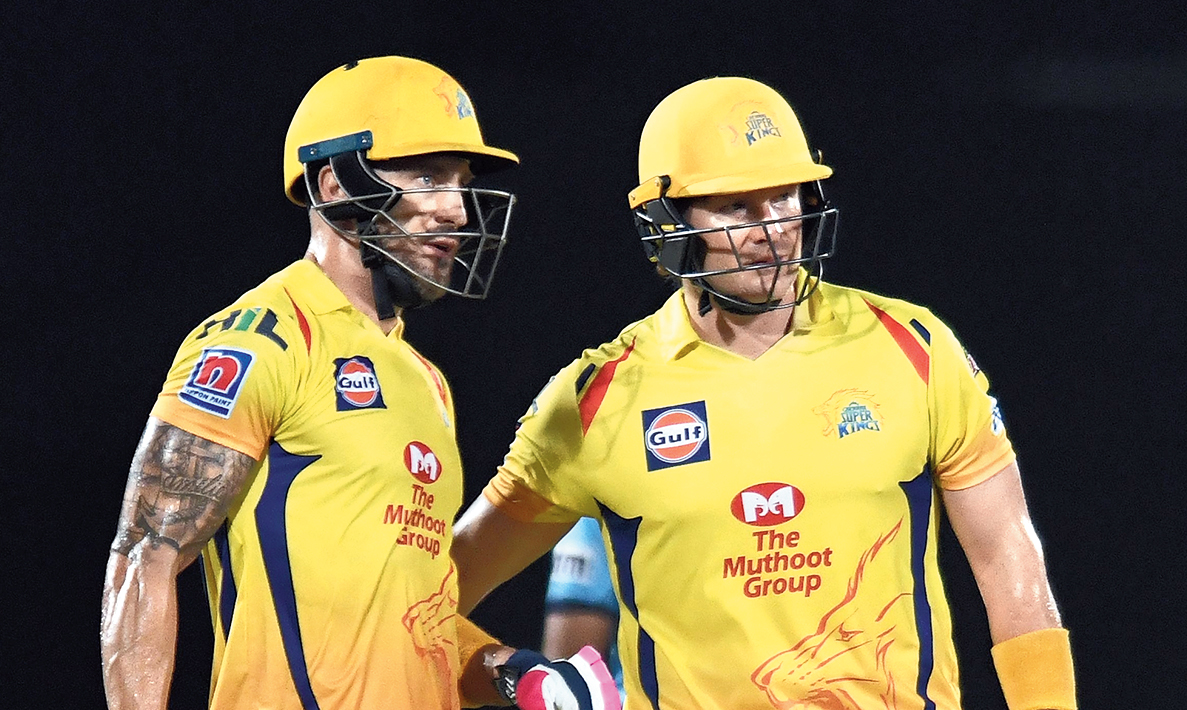 Come Sunday and it’s going to be another Mumbai Indians versus Chennai Super Kings IPL final, in Hyderabad.

On way to their eighth final appearance, the Super Kings once again outplayed Delhi Capitals to win the IPL XII Qualifier II encounter by six wickets in Visakhapatnam on Friday.

The three-time champions would certainly be looking to beat Mumbai Indians in the decider, something they have been able to do only once in the IPL, back in the 2010 edition.

The architects of the Super Kings’ victory on Friday were their bowlers and openers Shane Watson and Faf du Plessis. Both the openers hit half-centuries after the bowlers restricted Delhi Capitals to 147 for nine.

“We didn’t have the best run in the last five or six games, but we do have a lot of confidence as a team that has won a lot of big games. We drew a lot of strength from that,” said Man of the Match Du Plessis after the Super Kings’ victory with an over to spare.

Elaborating on the strength of his team, Du Plessis added: “We also know the strength of ours is getting those partnerships. Even if we go three-four overs without runs, we have a great lower and middle order to bring us back in the game.”

Du Plessis hopes he along with Shane Watson will again be able to stitch a strong stand at the top of the order in the final and make things easier for the rest of the batsmen.

“Watto thanked me already for scoring quickly at the beginning before he got set (in this game). Hopefully, we can both get them off the meat in the final right from the word ‘go’,” said Du Plessis.

“Our strength is to get partnerships going and extend them, even if we take our time initially. We’ve got a lot of good batsmen down the order and we back them to catch up with the required rate.”

Talking about the pitch at the ACA-VDCA Stadium in Visakhapatnam, the South Africa captain said: “Especially the previous game that we watched two nights ago, the wicket looked really good and the guys were playing some big shots.

“We were expecting that kind of wicket, but it didn’t turn out that way.”

Captain Mahendra Singh Dhoni lauded his team for its wonderful response in a knockout game and also credited his bowlers for doing a good job early on.

“The kind of response the boys gave was brilliant. You’ll go for runs, miss some catches as well, but it’s important to come back strong. The way we batted to chase down 140-plus was really nice,” Dhoni said .

“The bowling effort was brilliant and we kept it in the right areas, not allowing Delhi Capitals to get a big score. It was important to get their openers out as their batting line-up is really strong and they have many left-handers, while we have a left-arm spinner to negate them.

“The ground is a little small, so it was important for them to keep getting wickets. The timing of the wickets was very important because it was difficult for new batsmen to come and hit the big strokes straightaway.”

Dhoni added: “I think the credit needs to go to the spinners too. The captain only tells them, ‘I will be using you at this point of time’. But when they get the ball, it’s up to them.

“Their experience counts, but they have to do the hard yards to stay fit for 45-50 days and be at their best to keep playing in hot conditions… We are happy we haven’t had many injuries and thanks to the bowling department because it’s for them that we are here.”