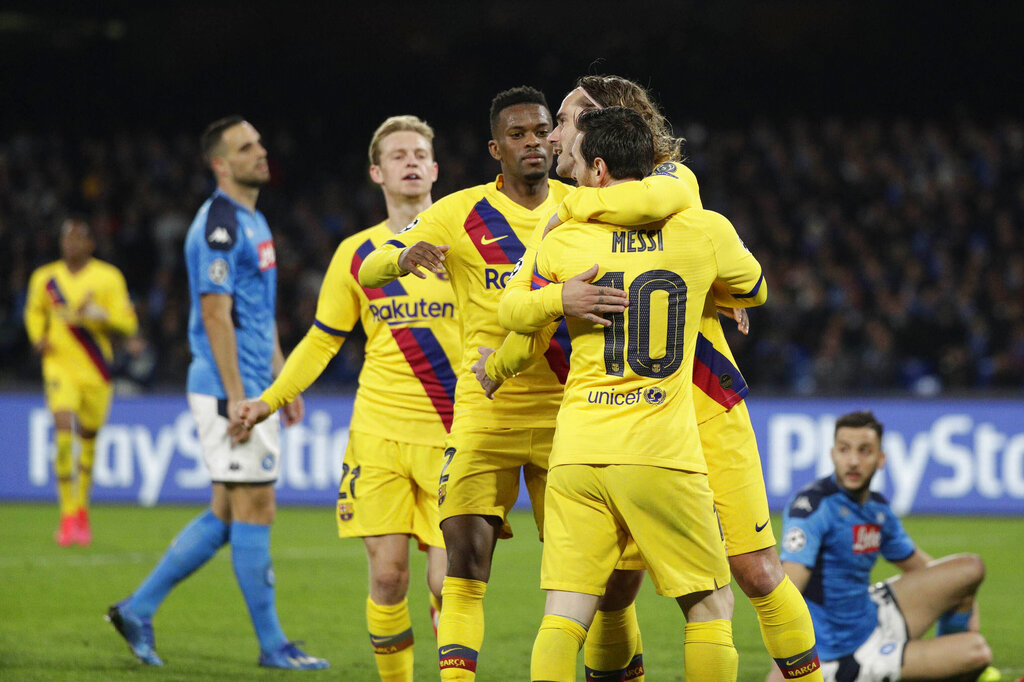 Antoine Griezmann (right) is hugged by teammate Barcelona's Lionel Messi after scoring during the Champions League, Round of 16, first-leg football match between Napoli and Barcelona in Naples
(AP)
Agencies   |   Madrid   |   Published 29.02.20, 10:11 PM

Real Madrid coach Zinedine ‘Zizou’ Zidane has said his side are in a delicate situation as they prepare to host arch-rivals Barcelona in a La Liga title showdown on Sunday amid a downward spiral of results which has left their season in limbo.

Zidane’s side held a three-point lead over Barca at the top of the table two weeks ago but defeat by the Catalans would leave them five points behind them with 12 games remaining.

What looked to be a highly promising campaign has unravelled with a run of only one win in their last five games, in which Real have dropped points against Levante and Celta Vigo and been knocked out of the Copa del Rey by Real Sociedad.

Their hopes of remaining in the Champions League are hanging by a thread after Wednesday’s last-16 first leg against Manchester City in which they conceded two late goals to lose 2-1 at home.

“This is a delicate time for us because we have not won the last three games in our stadium, but we know things like this can happen and we have to keep a positive mindset,” Zidane told a news conference ahead of Sunday’s Clasico.

“We will only come out of this situation by staying strong and by not listening to what people say about us. We will need our fans on our side from the first to last minute. I can understand why our fans are upset but we need them and they need us and at the very least we will give everything on the pitch.”

Real are without injured forwards Marco Asensio and Eden Hazard plus the suspended Rodrygo but French defender Ferland Mendy will return after he was rested in last week’s loss to Levante to ensure he would not be suspended against Barca.

This is the second moment of reckoning for Zidane this season after a heavy defeat by Paris St Germain in September and a loss to Mallorca in October left him fighting for his job.

The team responded by tightening up their defence and going on an unbeaten run of 21 matches, although Zidane warned last month that it would only take a couple of bad results for him to be back in the firing line.

His Barcelona counterpart, Quique Setien believes Madrid are under greater pressure than his side.

“For Real Madrid this game is vital and much more important than it is for us. It is a key and decisive game for them, it’s also important for us but perhaps not as important,” Setien said.

It could be a very important day, a victory would give us a lead of five points but in these games the past is quickly forgotten about.