She was born with cerebral palsy, which mostly affects the right side of her body 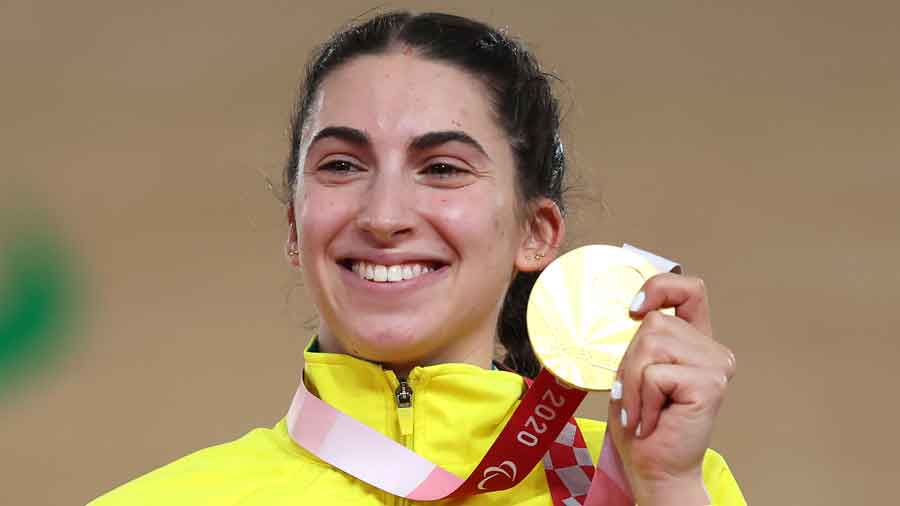 Cyclist Paige Greco of Australia claimed the first gold medal of the Tokyo Paralympic Games, winning the 3,000m pursuit on Wednesday at the velodrome. Wang Xiaomei of China was second and bronze went to Denise Schindler.

It was the first of 24 gold medals up for grabs on Wednesday as the Paralympics got underway in the middle of a pandemic that has seen new cases in Tokyo soar since the Olympics opened just over a month ago.

Greco was born with cerebral palsy, which mostly affects the right side of her body. It was her first Paralympic Games medal.

“It feels amazing,” Greco said. “I still can’t believe it. I keep looking down and seeing (the gold medal). It’s not really sunk in yet.”

Indian paddlers Bhavinaben Patel and Sonalben Manubhai Patel began their campaigns with opening round defeats in their respective events.

Competing in the women’s Class 3 category, Sonalben was ahead after the first three games but lost momentum to lose 11-9, 3-11, 17-15, 7-11 4-11 against Li Quan of China, world No.4 and the Rio Paralympics silver medallist, in a tightly-contested match.

Players in the Class 3 category have no trunk control, yet their arms are minimally affected by the impairment, while in Class 4 competitors have fair sitting balance and fully functional arms and hands.

Away from the competition, organisers confirmed that two more athletes have tested positive for Covid-19 in the Paralympic Village.

That brings to three the number of positive cases among athletes in the Village over the last two days and six among “games-related personnel” in the past three days.