Aussies knocked off the required runs in just 6.2 overs to replace South Africa in the second spot 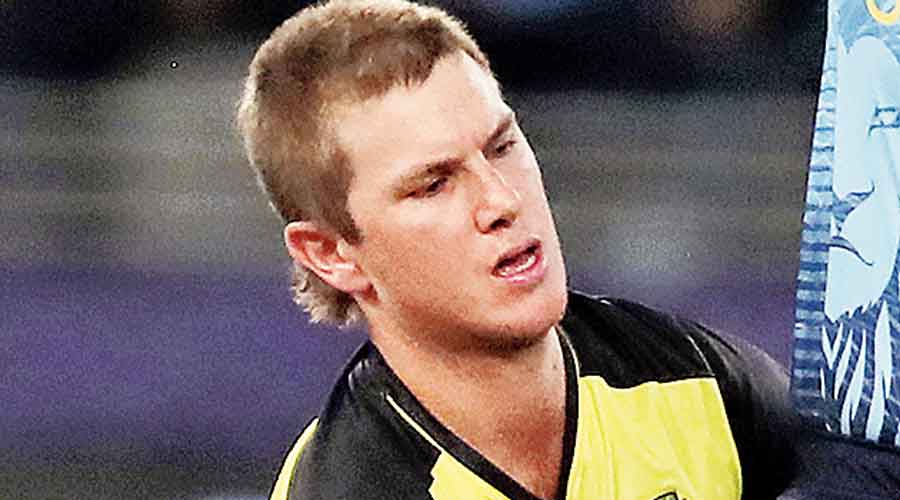 Leg-spinner Adam Zampa returned a career-best five-wicket haul in the shortest format as Australia crushed Bangladesh by eight wickets to take second spot in Group 1 and keep their semifinals hopes alive in the T20 World Cup here on Thursday. Bangladesh innings fell like house of cards as neither the batters could contend with the Australian pacers nor they negotiated the spinners well and were all out for just 74 in 15 overs after being asked to take first strike.

Zampa (5/19) maintained splendid line and length throughout to trouble the batters, who found it difficult to read him. Fast bowlers Mitchell Starc (2/21) and Josh Hazlewood (2/8) shared four wickets between them while Glenn Maxwell (1/6) dismissed one batter. Already out of the semifinal race, Bangladesh could not apply themselves even as the ball was coming nicely on to the bat. They could not win a single game, losing all five matches in the Super 12 stage.

Australia knocked off the required runs in just 6.2 overs to replace South Africa in the second spot. They now have six points, same as that of Proteas but the massive win boosted their Net-Run-Rate (1.031), which is now better than the Temba Bavuma-led side (0.742).

Skipper Aaron Finch (40) and David Warner (18) added 58 runs in five overs for an explosive start. Mitchell Marsh (16 not out) and Glenn Maxwell (0) took the side past the finish line. Finch was pleased with his side's clinical performance.

"Mitchell Starc set the tone and Hazlewood followed with that in the second over. We thought we would take the opportunity to win big if we got the chance, but you can't plan for that. At the half-way mark, we knew (we could get past South Africa)," said Finch. "When you have that opportunity, you have to take it. Zampa's 5 for 19 was outstanding."

Bangladesh skipper Mahmudullah was short for words at his team's dismal show in the tournament. "When you have these sort of performances, it is hard to say much. There are a lot of areas we have to look at, especially our batting. The wickets that we have played on have been among the best for batting. We have to figure out what went wrong when we go back to Bangladesh," he said.

Mahmudullah said they could not adapt to the conditions and that hurt them. "The thing is before playing in the World Cup, we had to get some wins under our belt. As professional cricketers, you have to adapt to all conditions. But we have lacked awareness as a unit, and we have to pick up on that. "If you see, in the Super 12s, we came close to closing two games against Sri Lanka and West Indies. Other than that, we have been outplayed by the opposition. I hope the supporters keep supporting us," he said.

Starc provided the first wicket as Liton Das (0) dragged one back on to the stumps while Josh Hazlewood got rid of Soumya Sarkar (5), who also played on to the stumps. Maxwell trapped Mushfiqur Rahim (1) while Zampa had Afif Hossain (0) caught in the slip region. Hazlewood got his second victim in opener Mohammad Naim (17), who was caught by Pat Cummins at square leg when the batter miscued a pull shot.

Bangladesh were struggling at 33 for five and needed skipper Mamudullah and Shamim Hossain to repair the innings. Mahmudullah (16) found two boundaries off Starc while Shamim too took on the same pacer for his first boundary. Shamim also lofted Zampa confidently for a six over deep square leg. He was stroking the ball fluently but could not convert his good start into a substantial knock.

Zampa had the left-hander caught behind when he tried to play a cut shot and trapped Mahedi hasan in the next ball to be on a hat-trick. When he returned to bowl, wicket-keeper Matthew Wade dropped a catch to deny his colleague the hat-trick milestone. The skipper too departed soon with Starc spelling his ouster by having him caught behind, leaving Bangladesh at 65 for eight.

Bangladesh were now in danger of not even competing their 20-over quota and Zampa did not let them by scalping the remaining two batters.