WI were all out for 375 in their first innings 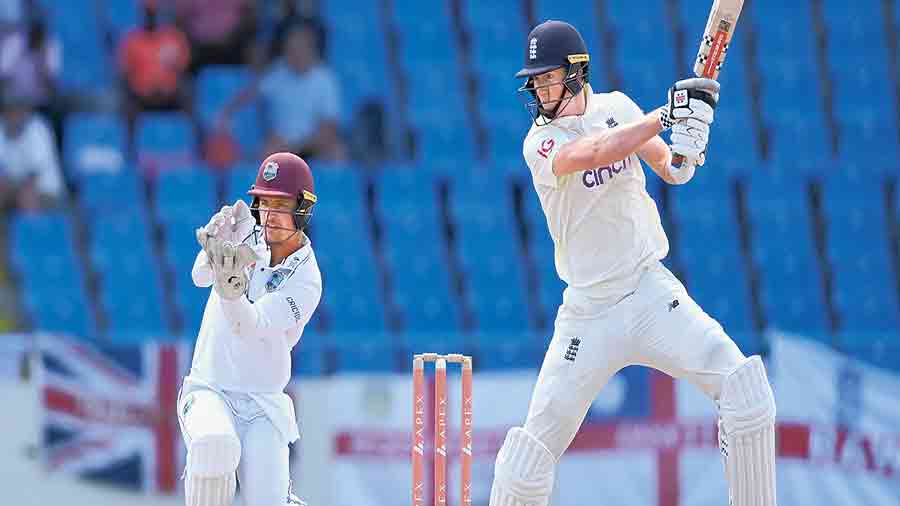 England erased their deficit from the first innings for the loss of just one wicket in the first session on Day IV of the first Test against the West Indies on Friday. Joe Root (20) and Zak Crawley (45) were unbeaten as England advanced to 72 for one at lunch in their second innings, an overall lead of eight runs in North Sound on the island of Antigua.

Test debutant Alex Lees (6) was the player to go, the left-hander trapped lbw by Kemar Roach for the second time in the match.

Roach set up the dismissal nicely, sending down several balls outside off during his spell before angling one back in and rapping Lees on the front pad.

The inevitable review showed the ball would have cannoned into leg stump, sending the disappointed opener on his way for a cumulative contribution of 10 runs for the match.

Earlier, West Indies were all out for 375 in their first innings.

The hosts added only two runs to their overnight score before losing their final wicket when Jayden Seales was out lbw for a duck to spinner Jack Leach on the third ball of the day.

Nkrumah Bonner top-scored for West Indies with a marathon 123, while captain Kraigg Brathwaite (55) was the only other player to reach a half century. The England bowlers shared the spoils, with Ben Stokes, Craig Overton and Leach each getting two wickets.

Bonner, at the age of 33 playing only his 10th Test, displayed the utmost care and patience as the West Indies crept to 373 for nine wickets in their first innings on Thursday.

After more than nine hours at the crease, Bonner was out just before stumps, his highest Test innings on a day when only 171 runs were scored at an average of less than two an over.

His 355-ball knock included 12 fours and one six, and he was finally dismissed caught behind off part-time bowler Dan Lawrence, who drew a faint inside edge to claim only his second Test wicket.

Bonner’s task was made easier by the absence of England’s fastest bowler, Mark Wood, who left the field with an elbow injury early after sending down only five overs in the morning.

“It means a lot,” Bonner said. “Today the team needed me and I’m happy I stepped forward. Obviously, we’re in a decent position.”

Earlier, he brought up his ton from 257 balls when he swept spinner Jack Leach for four.  Bonner’s previous Test century came on the same ground against Sri Lanka last March.