With two full days of play left, the Proteas have ample time to get the required 122 runs to level the series 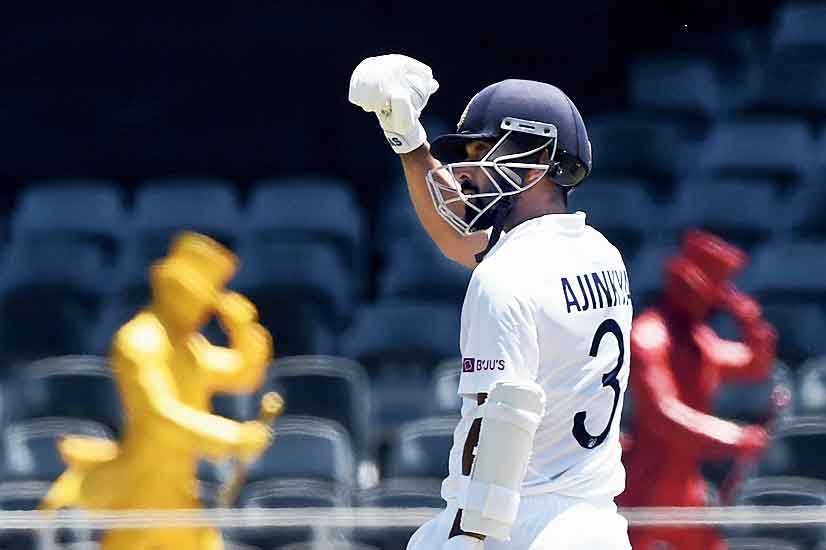 Ajinkya Rahane after completing his half-century against South Africa in the second Test at the Wanderers in Johannesburg on Wednesday.
Getty Images
Sayak Banerjee   |   Published 06.01.22, 01:46 AM

Cheteshwar Pujara and Ajinkya Rahane regained form when they really needed to, and more importantly, stitched together a century partnership that was massive for India under the circumstances at the Wanderers in Johannesburg. The senior pros did a fair bit of the job the team expected from them, which should for the time being, dispel doubts over their inclusion in the XI going forward.

For sure their timely half-centuries and the 111-run partnership, after stand-in captain KL Rahul and his opening partner Mayank Agarwal’s early dismissals during India’s second essay, should be giving Pujara and Rahane some relief.

But is Team India really relieved given how this second Test is placed? Not really.

At stumps on Day III, South Africa, chasing a target of 240, which is certainly difficult with the Wanderers pitch getting trickier, reached 118/2 with captain Dean Elgar (batting on 46) once again waging a vigil and being successful so far. Rassie van der Dussen (11 batting) is at the other end.

With two full days of play left, South Africa have ample time to get the required 122 runs to level the series. But the overall fragility of their batting line-up and the batsmen’s tendency to manufacture ways of getting dismissed keep alive India’s prospects of sealing the series by the end of this Test and creating history before reaching Cape Town.

Although batsmen have played their strokes on this pitch, the cracks on it are always keeping bowlers in the hunt. Make no mistake, India’s bowlers have been able to land the ball more on the cracks that have been leading to uneven bounce. There’s a bit of extra spin as well, which Ravichandran Ashwin exploited to trap Keegan Petersen lbw late in Wednesday’s final session.

Earlier, resuming on 85/2, Pujara (53) and Rahane (58) showed their detractors what intent actually is, unleashing a barrage of boundaries in the first hour of the third day’s play. In no time India extended their lead past 100, courtesy the duo.

Courtesy a short burst from Kagiso Rabada, who found the right length a little before lunch, the Proteas could somewhat repair the damage caused by Pujara and Rahane. Another collapse was triggered, but thanks to Hanuma Vihari (40 not out) and Shardul Thakur (28), who again contributed with the bat, India could stretch their second-innings total to 266.

The Proteas still have a fair distance to cover, but skipper Elgar, taking blows on his shoulder, helmet grille, both sides of the waist and on the right palm, continues to battle the likes of Jasprit Bumrah, Mohammed Shami and Shardul, who continues to look penetrative as in the first innings.