It was an absolute honour playing under your leadership, says Ashwin 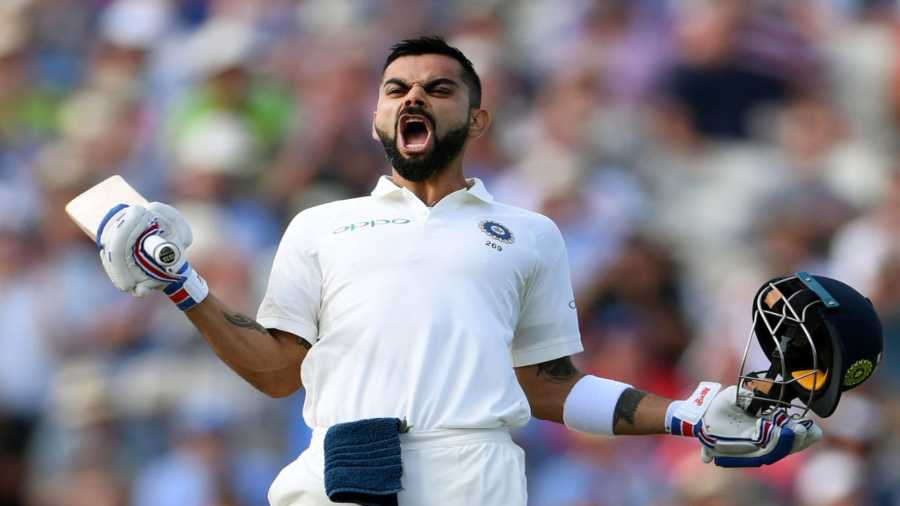 Virat Kohli is "one of the finest captains" and "once in a generation" cricketer, BCCI said in its rich tribute after the star batter quit as Test captain and asserted that it was a personal decision which the cricket body respects.

Kohli on Saturday ended his seven-year reign as India's most successful Test captain, a day after an unexpected 1-2 series loss against South Africa.

Under Kohli, India won 40 out of 68 Tests, a record which made him one of the most successful Test captains in world cricket.

"I personally thank Virat for his immense contributions as captain of the Indian cricket team. Under his leadership, the Indian cricket team has made rapid strides in all formats of the game. His decision is a personal one and the BCCI respects it immensely," BCCI president Sourav Ganguly said in a statement.

"Every good thing comes to an end."

"He will continue to be a very important member of this team and take this team to newer heights with his contributions with the bat under a new captain. Every good thing comes to an end and this has been a very good one," Ganguly added.

Kohli's strained relations with the BCCI recently made headlines when the star batter quit T20 captaincy and was later sacked as ODI captain. Ganguly had said they had requested Kohli to stay back till the T20 World Cup, a claim which Kohli contradicted.

Kohli has been the most successful Test captain India has ever produced. After taking over the reins from Mahendra Singh Dhoni, he led India in 68 Test matches and secured 40 wins at a win percentage of 58.82.

As Test captain, he registered his first series win against Sri Lanka in 2015, a victory that India registered in the Emerald Island after 22 years.

"Virat Kohli has been one of the finest captains to have ever led the Indian cricket team. His record and contribution towards the team as a leader has been second to none. To lead India in 40 Test wins is proof that he led the side with aplomb," BCCI secretary Jay Shah said.

"He led the team to some of its finest Test match wins in India and overseas including Australia, England, West Indies, Sri Lanka and South Africa and his efforts will inspire the fellow and upcoming cricketers who aspire to represent the country.

"We wish Virat the best for the future and hope that he will continue to make memorable contributions on the field for the Indian team."

Under Kohli's leadership, India also registered their first Test series win in Australia in 2018, clinched series in the West Indies, attained the No.1 spot in Test rankings and later in the subsequent years marched into the maiden ICC World Test Championship Final in 2021.

Kohli also holds the impeccable record of winning 24 out of the 31 Tests played at home as captain, having lost only two Tests.

"A cricketer like Virat comes once in a generation and Indian cricket is fortunate to have him serve the team as a leader," said BCCI vice-president Rajeev Shukla.

"He captained the side with passion and aggression and played a pivotal part in many of India's memorable wins at home and abroad. We wish him the best for his career ahead."

While Kohli is India's most successful Test skipper, MS Dhoni is second in the list with 27 victories in 60 games and Ganguly comes third with 21 wins.

Kohli also ranks fourth in the list of most victories as Test captain behind South Africa's Graeme Smith (53) and Australian duo of Ricky Ponting (48) and Steve Waugh (41).

"With his never-say-die attitude, Virat gave his all to the side as leader and his fabulous record as a captain speaks for that. From the moment he became India's Test captain, he made sure that India always strives for excellence and dominates world cricket," said Arun Singh Dhumal, BCCI Treasurer.

"While Virat the batsman remained a powerhouse, Virat the captain did not leave any stone unturned, powering the team to some of its finest performances across the globe. I wish him all the very best for the future."

It is expected that Rohit Sharma will now lead India in Tests apart from captaining the side the white-ball games.

"Your legacy as a captain will stand for the kind of benchmarks you have set," veteran spinner R Ashwin summarised Virat Kohli's spectacular Test captaincy stint as other members of the Indian cricket team also hailed the integrity and the vision of the talismanic leader.

Kohli, who took over from MS Dhoni midway through the Australian tour back in 2014-15, on Saturday announced his decision to quit Test captaincy.

The 33-year-old leaves as the most successful India captain in Test cricket with 40 wins from 68 matches with the highlight being the wins in Australia and England last year.

It was under Kohli that team India become a force to reckon with in all conditions and won overseas.

"Cricket captains will always be spoken about with respect to their records and the kind of triumphs they managed, but your legacy as a captain will stand for the kind of benchmarks you have set. There will be people who will talk about wins in Australia, England , Sl etc etc," Ashwin tweeted.

"Wins are just a result and the seeds are always sown well before the harvest! The seeds you managed to sow is the kind of standard you set for yourself and hence set the expectations straight with the rest of us.

"Well done @imVkohli on the headache you have left behind for your successor and that's my biggest takeaway from your stint as captain. We must leave a place at such an altitude that the future can only take it higher from there on," Ashwin added.

Senior India and Delhi pacer Ishant Sharma, who has played with Kohli since childhood, recalled a conversation during the 2017-18 tour of South Africa when Kohli had told him that India needs to start winning in overseas conditions.

"Thank you for all the memories I've shared with you in dressing room & on & off the field since childhood, where we never thought that you would be our captain & I'll play 100 test matches for India. All we did was just play cricket with all our heart & things worked out well.

"I still remember back 2017 in South Africa, where u told me it's high time to win series in these countries. Yes, we didn't win 2017-18 series in Africa, but we went to Australia & beat them in Australia. In England 2017-18 series we lost, but we know as team how close we came!

"So cheers to your most successful Test Captaincy for India and thanks for the amazing memories as a Captain you have given us," Ishant wrote.

Kohl's decision to quit Test captaincy caught everyone by surprise and India's limited overs skipper Rohit Sharma was no different.

"Shocked?? But congratulations on a successful stint as Indian captain," Rohit wrote in his Instagram post while also wishing Kohli the best for the future.

India's fast bowling revolution in Tests began under Kohli, who always backed his pacers. Jasprit Bumrah and Mohammad Shami were quick to thank the former skipper for his contributions.

"Integrity, insight and inclusivity. Your contribution to the team as captain is invaluable, you've been a great leader to this side. It's been a pleasure playing under you," Bumrah said.

"The epitome of leadership. The man who galvanised a team to win overseas Congratulations on a brilliant run as Team India captain. Looking forward to more from you with the bat - Go well Virat," Shami tweeted.

Congratulations on taking the Indian team all the way to the top! Been a pleasure playing under your leadership, Virat!," Dhawan tweeted.

"A leader in every sense. Can't thank you enough for all that you've done, Skip," said Rahul.

"Congratulations Virat Kohli on a fantastic term as captain. It was an absolute honour playing under your leadership. Someone who led by example. You have created a winning mentality in everyone. Your passion and dedication towards the game is an inspiration. Thank you, Skips," Agarwal said.