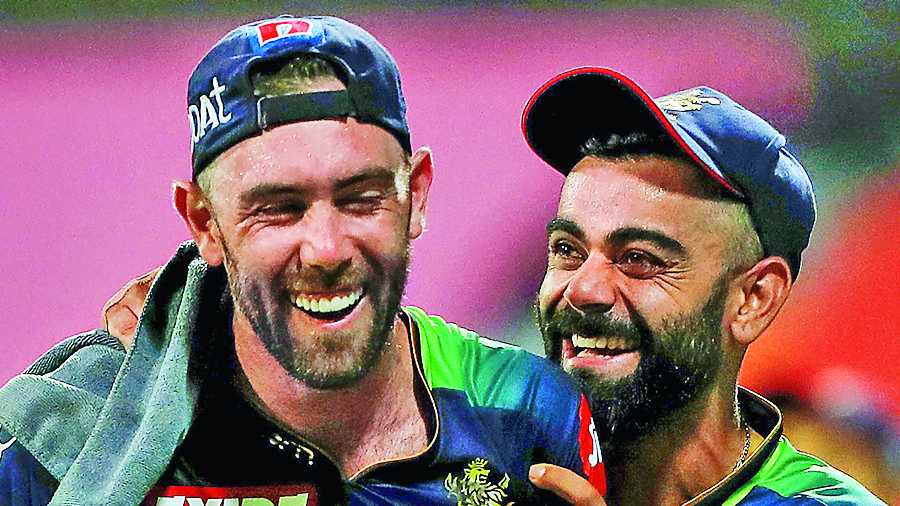 Glenn Maxwell and Virat Kohli during the match against Sunrisers Hyderabad at the Wankhede on Sunday.
PTI
Sayak Banerjee   |   Published 09.05.22, 01:52 AM

Both Virat Kohli and Kane Willliamson departed without troubling the scorers at the Wankhede in Mumbai on Sunday. Royal Challengers Bangalore (RCB), though, were largely untroubled with their former captain’s first-ball dismissal for the third time in IPL 2022.

Courtesy their skipper Faf du Plessis’ unbeaten 73 and leg-spinner Wanindu Hasaranga’s 5/18, RCB handed Sunrisers Hyderabad a 67-run thrashing to take their points tally to 14 and ensure they remain among the top four in the standings.

For the Sunrisers, going through a tough time with the ball early on, losing captain Williamson off a direct throw from Shahbaz Ahmed in the very first ball of their run chase certainly hit them hard. All they could manage in response to RCB’s 192 for 3 was 125 in 19.2 overs.

Having slumped to their fourth straight defeat, the Sunrisers now will have to win all their remaining three matches if they are to keep their play-offs prospects alive.

The advantage for RCB is the ability of others to step up even if Kohli continues to fail. In other words, RCB have batsmen who can compensate even if the most reliable men in their line-up are unable to deliver.

Du Plessis showed brilliant composure to pace his innings nicely all along after Kohli gave catching practice to mid-wicket off Jagadeesha Suchith in the first ball of the game.

With back-foot play being one of the characteristics of his batting, Du Plessis made room for himself and unleashed exquisite strokes that laid the foundation for RCB to post a big total. He got fine support from Rajat Patidar (48), who too played an important role in the 105-run second-wicket partnership, before Du Plessis and Glenn Maxwell (33) put on 54 for the third wicket.

Thereafter, finisher Dinesh Karthik (30 not out off 8 balls) executed what’s expected of him to perfection to propel RCB past 190.

For the Sunrisers, whenever they lost openers Abhishek Sharma and Williamson early, they have struggled. On Sunday, even Sharma departed for nought after Williamson was run out without facing a ball, making matters worse.

Even the in-form Nicholas Pooran couldn’t last long, with his dismissal off Hasaranga practically sealing the game for RCB. Rahul Tripathi, at No.3, did score 58, but he never really appeared intimidating enough. Lack of quality in batting hurt Sinrisers.