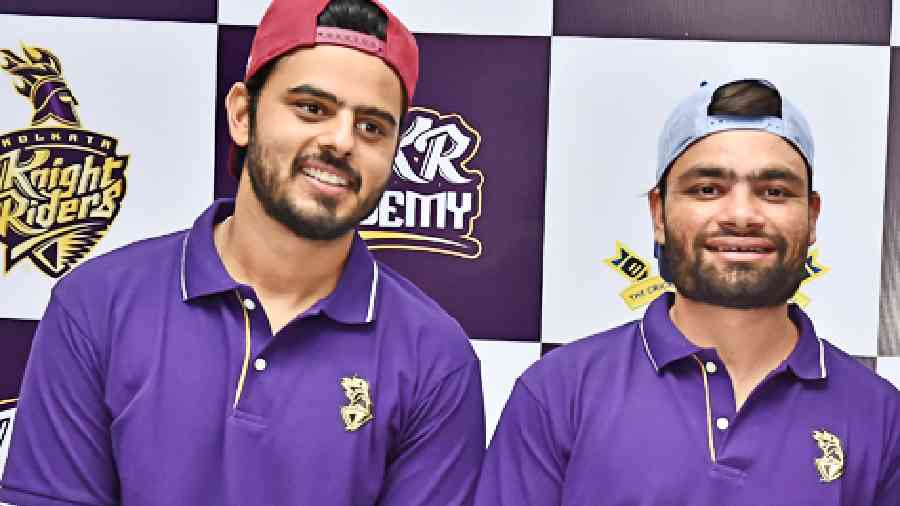 Rinku Singh was one of the few gains for Kolkata Knight Riders (KKR) in what was an indifferent IPL season this year.

Rinku now is determined to cash in on his impressive showing and reach the next level. Life had been a struggle for him and his family till he got a feel of the IPL.

And after being roped in for Rs 80 lakh in the 2018 auction, Rinku ensured he vindicated the Knight Riders’ faith in him with important contributions in the slog overs to finish this season with 174 runs (from seven matches) at a very impressive strike rate of 148.71.

Those struggles of the past are history now for the 24-year-old middle-order batsman as he just wants to keep looking forward from hereon.

“Obviously, the experience I’ve had in the IPL so far carries a lot of significance for me,” Rinku told The Telegraph on the sidelines of a KKR camp for Bengal junior cricketers at Eden Gardens’ indoor centre on Thursday.

“KKR bid Rs 80 lakh for me in the 2018 auction. My family hadn’t seen so much money before, but that mindset has changed as (financially) we’re no longer facing such a situation now. Jo dikkatein thhi saari, who khatam ho gayi (The problems that used to be there, exist no longer).

“So yeah, the IPL has certainly brought about changes in my life. A few more people know me now and I get recognised better, which definitely is one of the major changes. “My family members, too, are very, very happy as I’ve been able to make them smile. For me though, the biggest gain has been to contribute to my team’s cause, which I want to keep doing,” Rinku said.

The going won’t be getting any easier for him given the kind of competition at present in Indian cricket. But he stays focused and is quite clear about his goal.

“Almost saare shots hi aatein hain (I can play almost all the shots). So in terms of batting, I just need to fine-tune a little bit here and there. “I practise regularly at the KKR academy (in Mumbai) and I keep working on my batting as I want to play for India within a year or two,” the left-hander emphasised.

Not just in white-ball cricket, Rinku has made a mark in first-class cricket as well. His average (60.51) in 32 appearances so far reflects so.

“First-class cricket is equally important for me. That’s one reason why I try to score runs every season in domestic cricket,” the Uttar Pradesh batsman said.

The Knights, on the other hand, mull having their pre-season camps at the Eden now on a regular basis.

“The Eden currently has excellent indoor facilities as well, while the Covid situation too has eased. “So we should be having our camps here,” a KKR official said.

KL Rahul has been added to India’s 15-member squad for the ODIs in Zimbabwe, after being passed fit. He will take over as captain from Shikhar Dhawan, who will now act as his deputy.

Rahul was included after the opener spoke to chief selector Chetan Sharma and expressed his willingness to play some matches ahead of the Asia Cup from August 27.

The matches will be played in Harare on August 18, 20 and 22. The 30-year-old righthander has not played competitive cricket since end May, having been sidelined by injuries and a bout of Covid-19.

He was scheduled to return during the tour of West Indies and US but was advised rest. It was understood Rahul has resumed batting over the past week.

Rahul’s form will be under scrutiny as he prepares to adjust to the new aggressive approach floated by Rahul Dravid and Rohit Sharma.