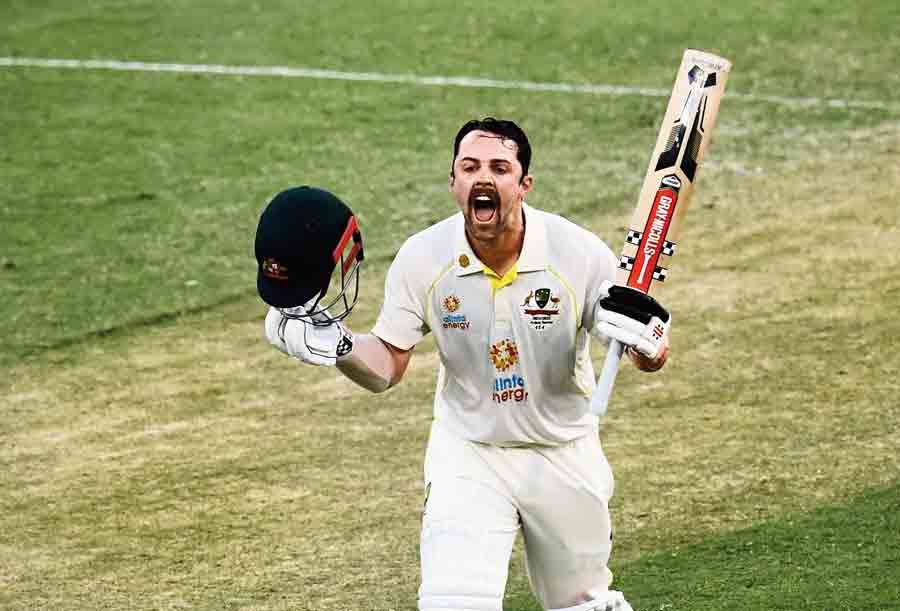 Travis Head exults after completing his century on Day II of the first Ashes Test against England at the Gabba.
Twitter
Agencies   |   Published 10.12.21, 01:44 AM

The first Ashes Test still has a lot of action left, but after two days of play it seems Australia have beaten England in terms of selecting the right playing XI.

While the Aussies benefited immensely from picking middle-order bat Travis Head over the much-experienced Usman Khawaja, England were left to regret not including Stuart Broad, the veteran of many Ashes contests, in the team to accommodate left-arm spinner Jack Leach.

Head, with a bruised chin and sore forearm after wearing two body blows from paceman Mark Wood, smashed an aggressive century to put Australia in the driving seat at the Gabba in Brisbane. The Englishmen were actually the ones who were bruised badly from a miserable day on the field, the injury concern over comeback-man Ben Stokes adding salt to their wounds.

David Warner fell six runs short of what would have been a fortuitous century but Head kept the blowtorch on with an unbeaten 112 that pushed Australia to 343/7, a commanding 196-run lead over England’s paltry first innings total of 147.

Tail-ender Mitchell Starc was 10 not out at the end of a day of sapping heat and humidity in which the problems piled up for Joe Root’s England.

While Australia’s day was set up nicely by a 156-run stand between opener Warner and No.3 Marnus Labuschagne (74), Head came to the crease as England rallied with a three-wicket fightback before and after tea.

Australia were 195/5 when Cameron Green was bowled for a first-ball duck by Ollie Robinson after tea but Head anchored steadying partnerships with Alex Carey and captain Pat Cummins to wrest back the advantage.

“I can’t quite work out what transpired in the last couple of hours. Hopefully, we’ve put ourselves in a nice position. We’ve had two great days and in Australia I guess you want to keep guys out there as long as possible,” Head told reporters.

Spinner Leach could not justify his selection and gave away 95 runs in his 11 overs for the wicket of Labuschagne before being taken off the attack. England bowing coach Jon Lewis would not say they got their bowling combination wrong.

“We felt it was the right decision at that time,” he said. “If we’d bowled to the best of our ability, we’d have put Australia under a bit more pressure.”

“We’re definitely not defeated yet. Expect Jack to come back strong and show the character I know he has.” Australia scored at above four-an-over and even when the England seamers created opportunities, their sloppy fielding let them down. Warner was the beneficiary on three occasions.