Sent in to bat on a grassy wicket after Pat Cummins won the toss, the Three Lions were all out for 185 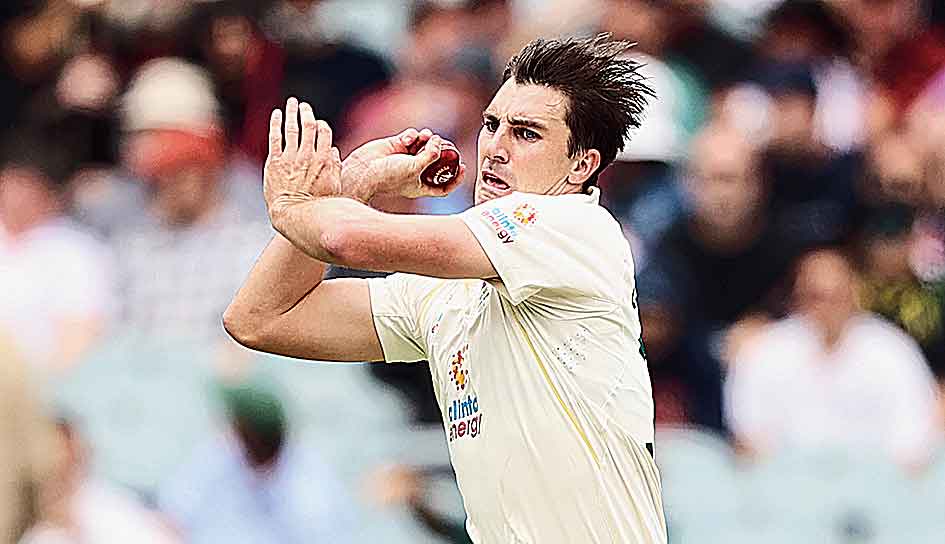 Pat Cummins of Australia bowls on the first day of the third Ashes Test at the Melbourne Cricket Ground on Sunday.
Getty Images
The Telegraph   |   Published 27.12.21, 01:49 AM

Joe Root wanted his team to do “better” and not commit “basic mistakes” in the third Ashes Test, which began in Melbourne on Sunday. But none of those wishes came true as Australia, having won the first two games, continued their dominance over England.

England’s hopes of keeping the Ashes alive nosedived in a familiar fashion as their batsmen once again capitulated. Sent in to bat on a grassy wicket after Australia captain Pat Cummins won the toss, England were all out for 185.

The Boxing Day crowd returned home all smiles as by stumps, Australia raced to 61/1. Marcus Harris was 20 not out with nightwatchman Nathan Lyon yet to score. David Warner was out for a quickfire 38.

The England bowlers need to pull out an out-of-the-world performance from their bag of tricks on the second day of the match if the visitors are to stay alive in the Test and the series. For the record, only one team has ever turned around a 0-2 deficit to win the Ashes. That was Don Bradman’s Australia, when they won the 1936-37 series 3-2 on home soil.

England could do little to repel Cummins, whose pace bowling accounted for three wickets in the morning. But several soft dismissals after lunch crushed England’s hopes of salvaging a respectable total.

Though captain Root chalked up his ninth half-century in Australia, he was culpable in his dismissal for 50, caught behind with a loose drive at a Mitchell Starc delivery. The England captain now shares with former Australia opener Bruce Laird the unenviable record of the most Test fifties in Australia without making a century (9).

England’s rejigged opening partnership of Zak Crawley and Haseeb Hameed lasted 12 balls before Cummins had Hameed caught behind for a duck. Crawley, who replaced Rory Burns, managed 12 before edging Cummins straight to Green at gully.

The Australia skipper bagged his third wicket in the last over before lunch, with Dawid Malan (14) edging to the slips to break a budding 48-run partnership with Root.

Bairstow battled for his 35 before going on the offensive in the search for quick runs as his batting partners dwindled. He was out trying to duck a venomous Starc delivery that caught his bat and looped to gully, where Green dived forward to take a terrific catch.

Boland, who became the second indigenous Australian to play for the men’s Test side, opened his account by trapping Mark Wood lbw for six.