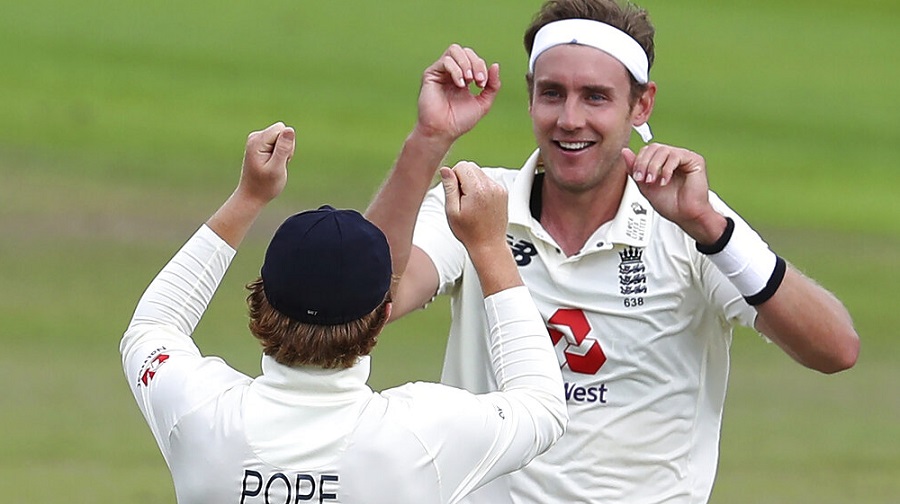 Stuart Broad smashed a swashbuckling half-century off just 33 balls before grabbing two wickets to put England in control of the third and deciding Test versus the West Indies at Old Trafford  on Saturday.

Broad helped England to finish at 369 in their first innings and then dominated the Windies batsmen with the ball as the visitors limped to 137/6 when bad light stopped play on Day II.

The Windies’ hopes of staying alive rely hugely on skipper Jason Holder, who needs to make amends for his below-par showing with the ball and some mediocre captaincy as well that allowed Broad extra runs earlier in the day.

Wicketkeeper-batsman Shane Dowrich is the other unbeaten batsman, though it depends how much longer fortune continues to rescue him when England quicks resume tormenting him with the short-pitched stuff.

Coming back to Broad, he eventually scored 62 off 45 balls, putting the brakes on the early breakthrough made by the Windies.

They had taken four wickets quickly at the start of the day, including that of Ollie Pope who failed to add to his overnight 91. The other overnight batsman Jos Buttler was dismissed for 67.

But Broad provided a timely reminder of his batting skills as he flayed the bowling to all parts of the ground during a 76-run partnership with Dom Bess for the ninth wicket.

He was back at it again directly after lunch as the West Indies began their reply, removing Kraigg Brathwaite (1) in his first over.