Advertisement
Home / Sports / Cricket / Step to scale the ‘A’ level

Step to scale the ‘A’ level

Sixty cricketers are scheduled to take part in three camps, which will be held in Mysore, Bangalore and Anantpur from July 11 till August 4 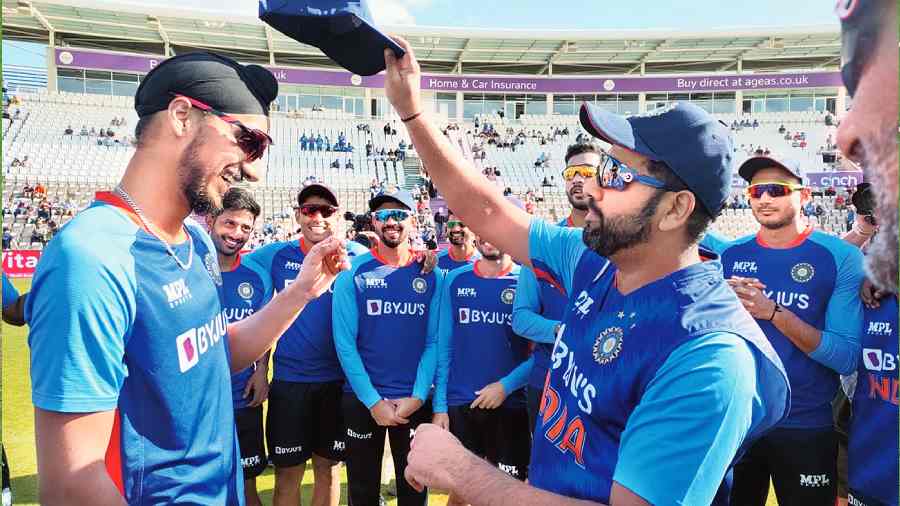 India captain Rohit Sharma presents pacer Arshdeep Singh his India cap ahead of his debut in the first T20I against England at the Ageas Bowl in Southampton on Thursday.
Twitter
Sayak Banerjee   |   Calcutta   |   Published 08.07.22, 02:40 AM

India head coach Rahul Dravid and National Cricket Academy (NCA) chief VVS Laxman’s efforts to revive camps for the country’s emerging players should certainly be a boon for the youngsters. Particularly, in terms of their smooth transition to the India A set-up.

Sixty cricketers are scheduled to take part in three camps, which will be held in Mysore, the NCA (Bangalore) and Anantpur from July 11 till August 4. It has been learnt that three squads with 20 players each will be playing a set of multi-day, one-day and T20 practice matches among themselves till around September 2 before the Indian squad gets finalised for the Emerging Team Cup, which could be held in New Zealand towards the end of the year.

According to sources, the camp in Mysore will comprise those U-23 youngsters who have fared well in the 2021-22 Ranji Trophy. They will be under the supervision of India A coach Sitanshu Kotak.

The ones at the NCA will be those cricketers who were part of the last two India U-19 World Cup squads, and they will be supervised by (India U-19 coach) Hrishikesh Kanitkar.

In Anantpur, Mumbai coach Amol Muzumdar will be in charge of those players who couldn’t make the last two editions of the U-19 World Cup but featured in this year’s Ranji Trophy.

“A lot of the young cricketers suffered for one full season (2020-21) due to lack of quality practice and game time when the pandemic was at its peak. But with these camps, these guys can work on their game and prepare on getting themselves ready for the bigger levels. That’s the idea of Dravid and Laxman,” an NCA coach said.

The Emerging Team trophy has certainly been of help for Indian cricket as the likes of former captain Virat Kohli, off-spinner Ravichandran

Ashwin and seamer Bhuvneshwar Kumar have all played in this competition before becoming regulars in the senior team.

This year, four Bengal players will be in these three camps. Top-order batter Sudip Gharami and ’keeper-batsman Abishek Porel, who both had a decent Ranji campaign, will be part of the camps in Mysore and Anantpur, respectively. Left-arm quick Ravi Kumar will join the one at the NCA while left-arm spinner Amrit Raj Upadhyay, who had represented India in last year’s U-19 Asia Cup, has been slotted for Anantpur.

“This camp is important for us because if we can make an impression, we stand a fair chance of being considered for India A,” Porel said on Thursday.