Bowled out for 108 after chasing 164 for victory, the 2014 champions Sri Lanka can afford no slip-ups in their following qualifying matches against United Arab Emirates on Tuesday 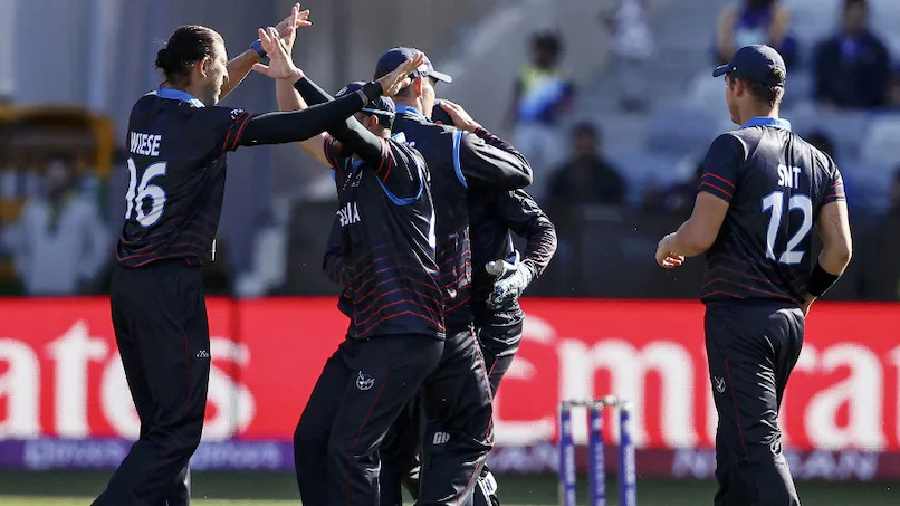 Sri Lanka's T20 World Cup campaign suffered a disastrous start on Sunday as the former champions crashed to a 55-run loss against plucky Namibia in Geelong.

Arriving as surprise Asia Cup champions, Sri Lanka had hoped to make an early statement against the African associate side in front of thousands of expectant supporters on a sun-bathed afternoon at Kardinia Park.

Instead, it was Namibia soaking up their finest international win a year after storming into the Super 12s at the last World Cup in the United Arab Emirates.

Bowled out for 108 after chasing 164 for victory, the 2014 champions Sri Lanka can afford no slip-ups in their following qualifying matches against United Arab Emirates on Tuesday and the Netherlands on Thursday.

All-rounder Jan Frylinck was man-of-the-match, top-scoring with 44 from 28 balls as Namibia put on a respectable total on a drop-in wicket.

He then picked up the wickets of Dhananjaya de Silva (12) and captain Dasun Shanaka (29) with his left-arm pace.

"I'm a little bit speechless at the moment, what we've just achieved is above what we thought we could do," said Frylinck.

"Now I'm just very excited at this point in time.

"Myself and JJ (Smit) got us to a competitive total and the bowlers just stepped up and it was unbelievable."

Sri Lanka crashed to 21 for three and their chase was all but over when Shanaka fell for 29, his team still 76 runs short with three wickets in hand.

"I think the surface played really well but the execution was not there when it comes to their bowling," said Shanaka.

"Once we lost three wickets in the powerplay, we were out of the game ... We've got a good team but it's all about the process.

"When we're chasing 160 we need (the top order) to kick in. And the bowlers need to hit the right areas."

Sri Lanka will have to pick themselves up without the services of left arm fast bowler Dilshan Madushanka, who was ruled out of the tournament with a quadriceps muscle tear in a huge blow.

He was replaced in the squad by Binura Fernando.

With a heavy South African flavour in their coaching, Namibia have been the big improvers among the second-tier sides and will back themselves to make another trip to the Super 12s.

"Incredible journey. Last year was a special experience for us and we've topped that with a great win," captain Gerhard Erasmus said.

"A historic day for us but we want to kick on from here and make that Super 12."