‘Lucky to have played the sport’ 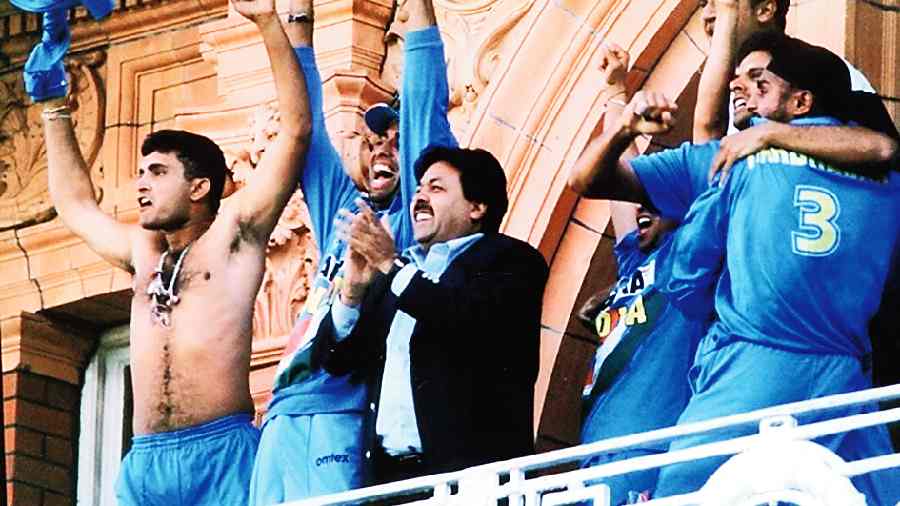 Sourav Ganguly, who turns 50 on Friday, will spend his birthday far away from the glare of Calcutta in his apartment in London with wife Dona, daughter Sana and other close relatives. The BCCI president and former India captain spoke to The Telegraph on his life & experiences. Excerpts…

Happy birthday in advance... Your 50th is only hours away...

Sourav: (Grinning) Yeah, it’s a significant number. Time has just flown. I still remember 1996 when I played my first Test, it’s been 26 years since.

You are in London now. Anything special planned with the family?

Nothing in particular. Haven’t decided anything specifically. Let’s see what happens.

If you are asked to list three significant things in your life, what would they be?

It’s very difficult to pick that way. There are so many things that have happened in life. But I can always say that I was fortunate enough to play the sport. I consider myself lucky in that sense.

Wouldn’t your century on Test debut or India captaincy find a place in that list?

That’s a part of sport. As I said, I was fortunate enough to play the sport and these things just followed.

What’s been your most significant achievement outside the sport?

The amount of love and affection I get from the city... So much, just fabulous. God has been really kind.

Sourav playing at Lord’s in July 1996 on Test debut, against England.

Would you have loved to do anything differently?

(Pauses) No... I don’t think so. When I sit back and reflect, I feel happy. In sport you can’t do things differently because it is an after-thought... in sport things happen in real time. You have to take the decision in that particular moment. So I don’t think I would tread that path where I would have done things differently. I did what I felt was the best at that particular moment and that is what sport is all about. Reflecting doesn’t make sense because you don’t get a chance to redo things again.

The Greg Chappell episode? You convinced the BCCI to have him as India coach. Looking back, don’t you think it was a mistake?

But you missed nearly a year at a very significant time of your career because of Chappell...

You had to even prove yourself in the domestic circuit to make a comeback...

I don’t think playing domestic cricket was tough but the entire situation was tough because it was something beyond my batting and bowling capabilities. So I couldn’t control that. I played for India for 13 years without a break before that. I hadn’t missed anything, not a series or tour. I hadn’t taken any rest like a lot of the players do now. So I consider those 4-6 months as a break from my career after those 13 years in an overall career of 17 years at the international level.

You said it was tough. But how did you battle through that period? It is said that you even contemplated taking sleeping pills…

No, this is not true. But yes I used to get angry and frustrated but worked doubly hard. I was determined to prove myself, to make a point. I knew I had a lot of cricket left in me then. I convinced myself I would prove myself to the men who matter.

When you were dropped from the ODI squad in early 2006, you were No.4 among the batters in the rankings…

Can you imagine No.4 in the rankings and most number of runs in the world in those 10 years! And yet I was not considered... That’s why I said it was just beyond batting and bowling.

Was retirement forced on you in a way during the home series against Australia in October-November 2008?

No, absolutely not. I always believed that when you play for so long you should go at your peak. And I did that. I played very well in my last series and finished it on a high (324 runs in 4 Tests at an average of 54).

The next phase would obviously be your role as an administrator. The nearly three years as BCCI president have been really fruitful…

These three years have been a golden period for the BCCI despite Covid for two years... in terms of cricket, finance, governance, everything... There have been no controversies...It’s been a fantastic show from the office-bearers.

But you seem to invite one controversy or the other. Even a tweet generates a lot of speculation…

When you are a successful person or you are someone well-known, these things happen. It’s just not me, it happens to many. You have to take it in your stride and move on.

Yeah absolutely... we have set the bar high. But you know I feel fortunate that I have been part of this meteoric rise of Indian cricket from Day I. When I started playing cricket there was nothing. Then it went through a transformation phase from 1996... then the IPL happened and the transformation kept continuing. Now as BCCI president, the figure has touched (Rs) 48,390.32 crore. And it’s not just about this. It’s also the (Rs) 12,715 crore the two new franchises fetched... The international broadcast rights are up next year. So it will be close to (Rs) 70,000-75,000 crore. That is huge.

No, we don’t. I don’t agree... I think there are very few countries and I must say India, England, Australia, New Zealand, South Africa and Pakistan really look after Test cricket. You see the Test matches in England. The series versus New Zealand and the lone Test against India ran to packed houses. In Birmingham, almost every seat was sold.

It is said that once the team purse in the IPL increases and the players get paid more, many will prefer playing franchise leagues over their country…

It’s not going to happen in India for sure. Nothing can match the pride playing for your country. Don’t forget that in England, Australia, South Africa, New Zealand, Test cricket is a priority.

The BCCI has talked about 84 and 94 IPL games towards the end of the next five-year cycle. Is a bigger window possible in the international calendar?

We will wait and see what happens. The next two years will be 74 and (we will) then see how it develops. It’s hard to say now.

Given the abundance of riches, will we see two India teams playing at the same time in Tests and limited overs in the near future?

Things will settle down now that the Ireland tour is over. There was a lot of backlog to be cleared because of Covid. I think after this tour things will return to normal. Only the best teams will play.

The BCCI has often been accused of not paying much importance to spectator comfort. After the IPL windfall, will the Board take some measures to improve the conditions?

Infrastructure will be a point of importance for the BCCI in the coming days. We will take all measures to address the issue.