Resolute Proteas’ lesson in how to triumph with moderate means 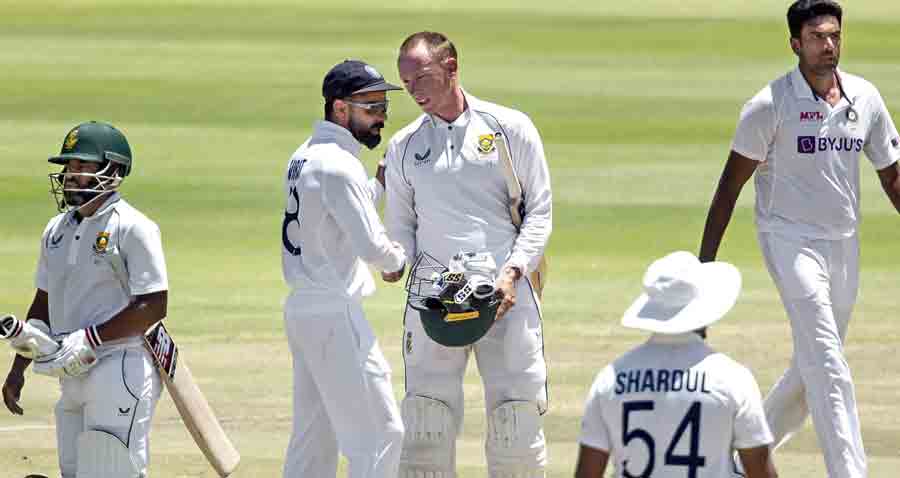 The stump microphone was spared of Virat Kohli and his colleagues’ wrath on Friday at Newlands in Cape Town. But Team India weren’t spared by the spirited South Africans.

The home team fought exceedingly well since gaining the momentum in Johannesburg and won the third and final Test by seven wickets to clinch the series 2-1. Few could have predicted such a result after India had won the first Test quite easily in Centurion.

Keegan Petersen (82), Rassie van der Dussen (41 not out) and Temba Bavuma (32 not out) took the odds in their strides and played the kind of cricket the situation demanded them, taking just over a session on Day IV of the Test to reach the tricky victory target of 212. The margin of South Africa’s win was identical to the one in the previous Test.

Despite losing their batting mainstay and captain Dean Elgar at the fag end of Day III, they perhaps couldn’t have done anything better to notch up the required 111 runs after resuming on 101/2.

As for India, no doubt this was their best chance to beat the Proteas in their home and be the second Asian team after Sri Lanka to win a Test series there. Instead, Elgar’s team, braving their limited abilities with the bat and the squad’s overall inexperience, gave Team India a reality check.

They highlighted the point that bowlers can’t keep bailing a side out of trouble all the time and second, pinpointed to the Indian team management that batting is one massive area of concern. Not always will the lower-order come up with freaky knocks.

One can argue that had Cheteshwar Pujara at first slip not shelled Petersen’s edge off the bowling of Jasprit Bumrah early in the day, India’s hopes would still have been alive.

South Africa then were still 86 away from the target and a breakthrough at that stage could have made a difference. Petersen, on 59 when Bumrah found the edge of his bat for the second time in the game, went on to add another 23 to his score, priceless in the circumstances.

The way Kohli, Ravichandran Ashwin and some of the other Indian cricketers behaved after Elgar’s lbw was overturned by the DRS late on Thursday, it appeared as if the Indians were more intent on proving the broadcasters and the “whole country” of South Africa wrong instead of focusing more on their bowling performances.

Besides, at lunch on Friday, the Proteas still needed 41 to win, but it was Ashwin and Umesh Yadav who began the proceedings in the second session, when it should have been Bumrah and Mohammed Shami.