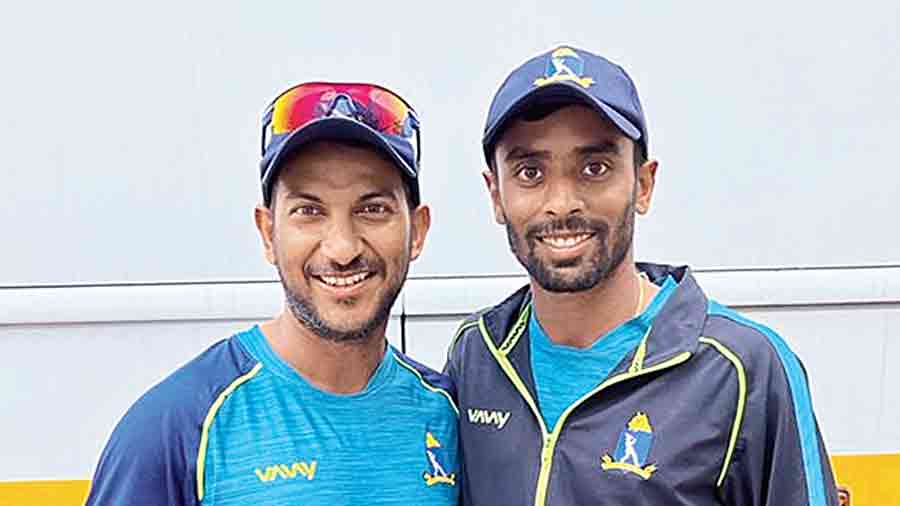 Captain Abhimanyu Easwaran smashed 114 and Anustup Majumdar scored an emphatic 95 to guide Bengal to 329/6 on Day I of their final Ranji Trophy group stage match versus Chandigarh in Cuttack.

At stumps on Thursday at the Barabati Stadium, Manoj Tiwary (40) and pacer all-rounder Sayan Shekhar Mondal (33) were at the crease.

Bengal could have been in a stronger position if not for a mini-collapse, when they slumped to 268/6 from 235/2, after Easwaran’s dismissal. But experienced campaigner and former skipper Manoj and Mondal did well enough to consolidate first and then accumulate quick runs to regain momentum.

Irrespective of the absence of the injured Akash Deep, who was replaced by another seamer Nilkantha Das, there’s enough firepower in Bengal’s bowling to keep Chandigarh under pressure even if their first innings total falls short of 400. Finishing even with three points will guarantee Bengal a berth in the knockout round.

Put in to bat, Bengal lost struggling opener Sudip Gharami in just the fourth ball of the game off medium pacer Jagjit Singh (3/53). No.3 batsman Ritwik Roy Chowdhury too didn’t last long, but Easwaran and senior pro Anustup did not take long to dictate terms.

The duo stitched 193 for the third wicket at a run rate in excess of four-and-a-half.

Devdutt Padikkal (161 batting) slammed his maiden first-class hundred as Karnataka ended Day 1 of their Ranji Trophy group C game versus Pondicherry at 293 for 3 at the Sri Sivasubramaniya Nadar College of Engineering ground in Chennai.

Sent in to bat by Pondicherry, Karnataka were reduced to 39 for 2, losing opener R Samarth and Karun Nair to Ashith Rajiv. Padikkal did the rescue act initially and the talented left-handed batsman was then in full flow, putting the opposition bowlers to the sword.

The former Royal Challengers Bangalore top-order batter, who’s now a part of Rajasthan Royals, has so far hit 20 fours and two maximums. At the Motera Stadium in Ahmedabad, Chirag Jani hit a superb 140 while Sheldon Jackson smashed an unbeaten 96 as Saurashtra reached 343 for 7 at stumps on Day I of their group D game versus Goa.