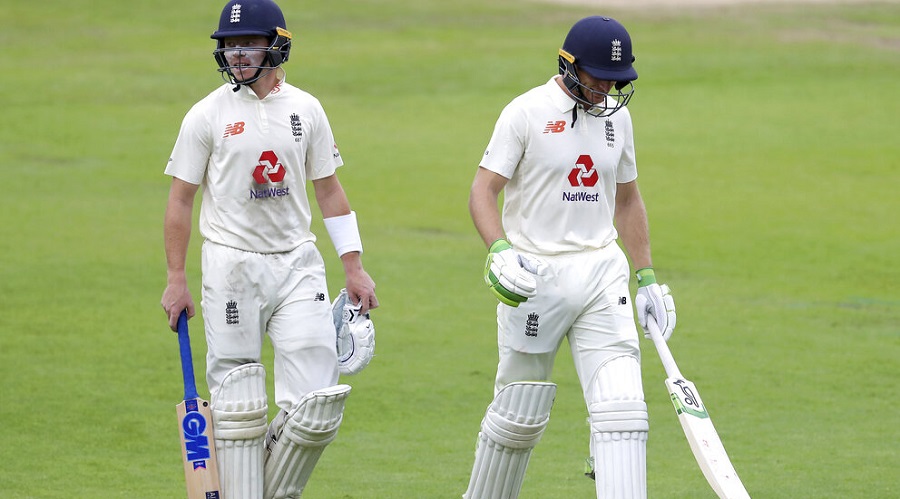 Ollie Pope and Jos Buttler made their first big scores of the series in putting on an unbeaten stand of 136 runs to rebuild England’s innings against the West Indies and put the hosts on top on Day One of the deciding Test at Old Trafford on Friday.

Both players were under pressure to deliver in the third Test after underwhelming performances so far in this series. Buttler, in particular, is feeling the heat from Ben Foakes for the wicketkeeper position and a first half-century in Tests since September justified the selectors’ backing of the limited-overs specialist.

Buttler smashed recalled spinner Rahkeem Cornwall for two sixes in the same over — one over deep midwicket and the other over long-on — but otherwise stayed measured and largely restrained in a 120-ball knock. His one and only Test century came two years ago against India.

Pope, whose highest score in this series was 12, compiled his runs quicker — a rarity for a batsman alongside Buttler — and struck 11 fours before bad light stopped play for the day about 10 minutes before the scheduled end in Manchester.
Before Pope and Buttler came together, the wisdom of England deploying a truncated batting line-up and including four fast bowlers along with a spinner was being questioned.

Dom Sibley (0) departed off the sixth ball of the day after playing across Kemar Roach and getting trapped lbw, and captain Joe Root, attempting a quick single, was run out by Roston Chase’s direct throw for 17 just before lunch.

When Ben Stokes — promoted to No. 4 and playing as a specialist batsman — was bowled through the gate by Roach for 20, England were 92/3 and their batting line-up was suddenly looking wafer thin. Stokes is being troubled by a quadriceps injury and has said that he will decide day-by-day whether he will be able to bowl for England in the ongoing Test.

“It’s going to be a day-by-day thing to see (whether I can bowl). Thursday I tested out my quad and I was a little bit worried I wouldn’t be able to offer everything that I possibly could with the ball, especially in the first innings,” he told Sky television before play started on Friday.

“But hopefully as the game goes on, and it settles down, I might be able to rock ’n roll some off-spin if needed!,” he joked.
Rory Burns (57) edged Chase to slip, where the burly Cornwall took a brilliant, instinctive one-handed catch.

A new Richards-Botham trophy will be up for grabs when England and West Indies next meet in a Test series as the teams pay homage to two of their greatest cricketers.

The title honours West Indies batting great Viv Richards, who scored more than 8,500 runs in a 121-Test career, and England all-rounder Ian Botham, who recorded more than 5,000 runs and took 383 wickets in 102 Tests.

The ongoing series between England and West Indies will be the last time the teams compete for the current Wisden Trophy, the England and Wales Cricket Board said on Thursday.

Richards said it was an honour to share the new trophy recognition with his close friend.

“I am delighted to know that the game that I have shown my love for since a little boy is naming such a prestigious award in recognition of what I managed to achieve as a cricketer,” the 68-year-old Antiguan said.

“When I had the opportunity to go to England and represent Somerset, one of the first people I met was Ian Botham, who would later become one of my best friends. We are friends for life,” Richards said.