Till late on Wednesday evening, the current bid amount was (Australian) $110,500, according to the Pickles Auctions website 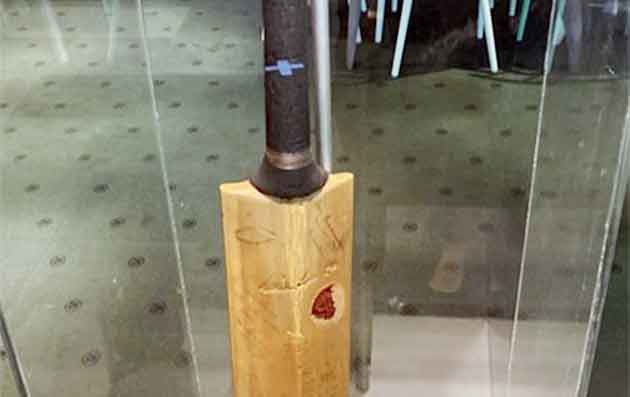 Sir Donald Bradman’s triple century bat that went up for auction on Wednesday, as posted by The Today Show
Twitter
Our Bureau And Agencies   |   Published 09.12.21, 03:04 AM

A piece of cricketing history, the bat used by the legendary Donald Bradman in the1934 Ashes series to score a triple century at Leeds is up for auction.

Bradman had also used the bat to score his highest-ever Test partnership of 451 runs with opening batsman Bill Ponsford. The bat has been on display at the Bradman Museum in Bowral in New South Wales’ Southern Highlands since 1999, on loan from a private owner.

The William Sykes & Son bat was used in all the five Test matches of the 1934 Ashes series in England, where Bradman amassed a total of 758 runs. Bradman, who had scored 6,996 runs from 52 Tests at an astounding average of 99.94, registered his top scores from the series with this bat, including his 304 at Headingley and 244 at The Oval.

“Its provenance is indisputable,” museum executive director Rina Hore was quoted as saying by abc.net.au. “Sir Donald has actually written in his own handwriting the fact that he made those scores with this bat. I think it is a treasure.”

Till late on Wednesday evening, the current bid amount was (Australian) $110,500, according to the Pickles Auctions website. “We’re certainly expecting it to get in the mid-late (two hundred thousands).”

The auction house was tight-lipped on who had put the bat up for auction. “I can’t say the name, of course, but it was actually gifted to a family member in England back in 1934,” Dempsey added.

“The current family member who is very, very lucky to have it under his care has decided to put it to open market. So it’s been in the same family since Sir Donald gifted it to the original family member back in 1934.”

The bids close on December 13. Another of Bradman’s bats got sold for (Australian) $110,000 in 2018. Bradman used that bat after the Bodyline series in Australia.