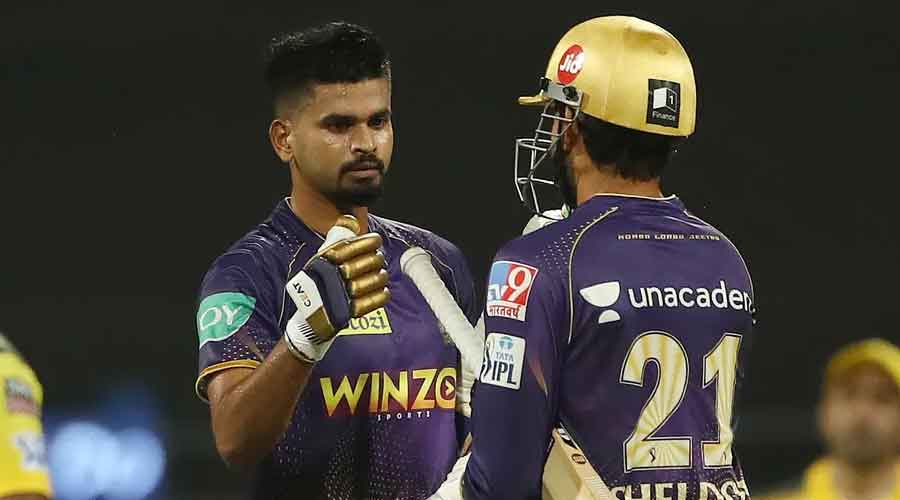 A clinically all-round Kolkata Knight Riders beat defending champions Chennai Super Kings by six wickets as Mahendra Singh Dhoni's first tournament fifty in three years went in vain in the IPL lung opener here on Saturday. Unburdened by captaincy, Dhoni, who relinquished the leadership role just two days back, smashed an unbeaten 50 off 38 balls to take CSK to 131 for 5 after being put in to bat.

But, KKR, who lost to CSK in the last season summit clash, chased down the target with nine balls to spare, with out of favour India batter Ajinkya Rahane top-scoring with a 34-ball 44.

Rahane, who was bought for Rs 1 crore by KKR after playing very few matches for Delhi Capitals last season, was in good touch as he hit six fours and one six during his knock. He shared 43 runs for the opening wicket with Venkatesh Iyer (16) and that was the highest partnership for KKR in the end. Nitish Rana (21), new captain Shreyas Iyer (20 not out) and Sam Billings (25) made useful contributions to give KKR a winning start to the tournament.

Iyer thus started his KKR captaincy with a win while his counterpart Ravindra Jadeja, who took the place of the iconic Dhoni as CSK skipper, began his stint with a loss. Iyer hit the winning runs, a boundary, as KKR reached 133 for 4 in 18.3 overs. Dwayne Bravo (3/20) was the pick of the bowlers for CSK.

The typical Wankede track, which had a good amount of bounce, did aid the KKR bowlers and they took maximum advantage. Devon Conway (3) and Robin Uthappa (28 off 21 balls) then tried to revive the CSK innings, but managed to add only 28 runs for the second wicket. Conway, who was looking rusty, became Umesh Yadav's second scalp.

Uthappa was brutal on Shivam Mavi, whom he hit for a boundary in the second over and followed it up by another boundary and a maximum in the fourth over. In between, he hammered Umesh for a six. But his stay was cut short, stumped by Shedlon Jackson off Varun Chakravarthy (1/23) in the eighth over as CSK found themselves in a spot of bother at 49/3. They further slipped to 52/4, as a horrible mix-up between Ambati Rayadu (15 off 17 balls) and Jadeja led to the former's dismissal. After 10 overs, CSK were tottering at 57/4.

CSK lost half of their side for 61 after Shivam Dube (3) gave a sitter to Sunil Narine at short-midwicket off pacer Andre Russell. Then, Jadeja and Dhoni added 70 runs for the sixth wicket to take CSK to a respectable total. The past and present captain duo initially played a barrage of dot balls but Dhoni hammered three boundaries in the 18th over, in which CSK amassed 14 runs. Showing glimpses of his famous match-finishing prowess, Dhoni fetched a boundary and a six in the penultimate over, from which CSK got 15 runs.

Meanwhile, The BCCI on Saturday felicitated Tokyo Olympians, including gold medallist javelin thrower Neeraj Chopra, with cash awards ahead of the IPL opener between Chennai Super Kings and Kolkata Knight Riders here. The Board handed Chopra a cheque of Rs 1 crore while Tokyo Games bronze medal winning boxer Lovlina Borgohain was given Rs 25 lakh for her achievement. The men's hockey team, which had also won a historic bronze medal at the quadrennial multi-sport event in Tokyo, was also handed a combined cheque of Rs 1 crore.

Captain Manpreet Singh picked up the cheque from BCCI chief Sourav Ganguly in the presence of Board Secretary Jay Shah. The BCCI had earlier announced cash awards for the medal winners at the Tokyo Olympics.