Going by numbers, the axe could fall on opener Mayank Agarwal, who didn’t get many runs in the first game 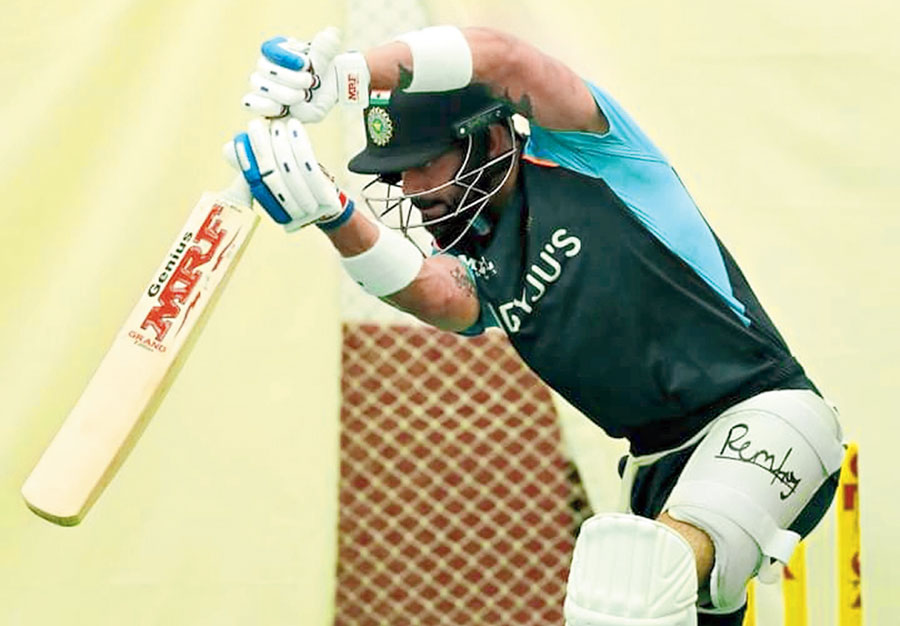 Virat Kohli practises a cover drive during training at the indoor facilities of the Bandra Kurla Complex in Mumbai on Thursday.
Twitter
Sayak Banerjee   |   Published 03.12.21, 02:07 AM

Virat Kohli’s return should boost Team India going into the second and final Test versus New Zealand, beginning on Friday at the Wankhede in Mumbai.

But who will be dropped to make space for India’s regular Test captain? Shreyas Iyer’s game-turning show on debut (105 & 65) in Kanpur has put the Indian team management in a dilemma on who to pick for the XI, and who to leave out, for the second Test.

Going by numbers, the axe could fall on opener Mayank Agarwal, who didn’t get many runs in the first game. Cheteshwar Pujara and Ajinkya Rahane, who led the team in the first Test, too haven’t been very consistent lately. But Mayank seems to be the easier option for the drop.

However, one must also note that there were instances when Rahane had been kept out of the XI for the sake of team combination. For example, the first two Tests when India last toured South Africa in early 2018.

“You have to understand the situation where the team is placed and where individuals stand at certain stages during the course of a long season. So you have to obviously communicate well, speak to the individuals and approach them in a way where you can explain things to them properly,” captain Kohli said on Thursday.

“And mostly, it’s been combination-based whenever we’ve changed in the past.” Wicketkeeper-batsman Wriddhiman Saha, according to Kohli, has “recovered from neck spasm and is absolutely fine”.

The Wankhede, hosting a Test after five years, is expected to have more bounce and pace as well as turn given its red soil. Terming the pitch “a great wicket for good cricket”, Kohli feels all kinds of bowlers will get purchase from the surface.

New Zealand, on their part, aren’t ruling out the inclusion of left-arm pacer Neil Wagner, based on their assessment of the conditions, senior pacer Tim Southee hinted. It has been raining over the last few days in Mumbai and it is expected to be partly cloudy at least till Sunday. Quicks, thus, could come into play more.

With the outfield being wet due to overnight rain, India trained at the indoor facilities of the Bandra Kurla Complex on Thursday. But New Zealand didn’t, as they didn’t deem the training centre to be within their bio-bubble.

Kohli, who had been practising with the red ball at the Cricket Club of India ground in Mumbai during the India-New Zealand T20Is, acknowledged returning refreshed, thanks to the short time he took off from international cricket.

Emphasising on the need to keep players in good mental space, he said: “Our players’ understanding and the management’s communication are good as we’ve spoken a lot about how to manage the workload. More than workload, it’s about giving players the mental space.”