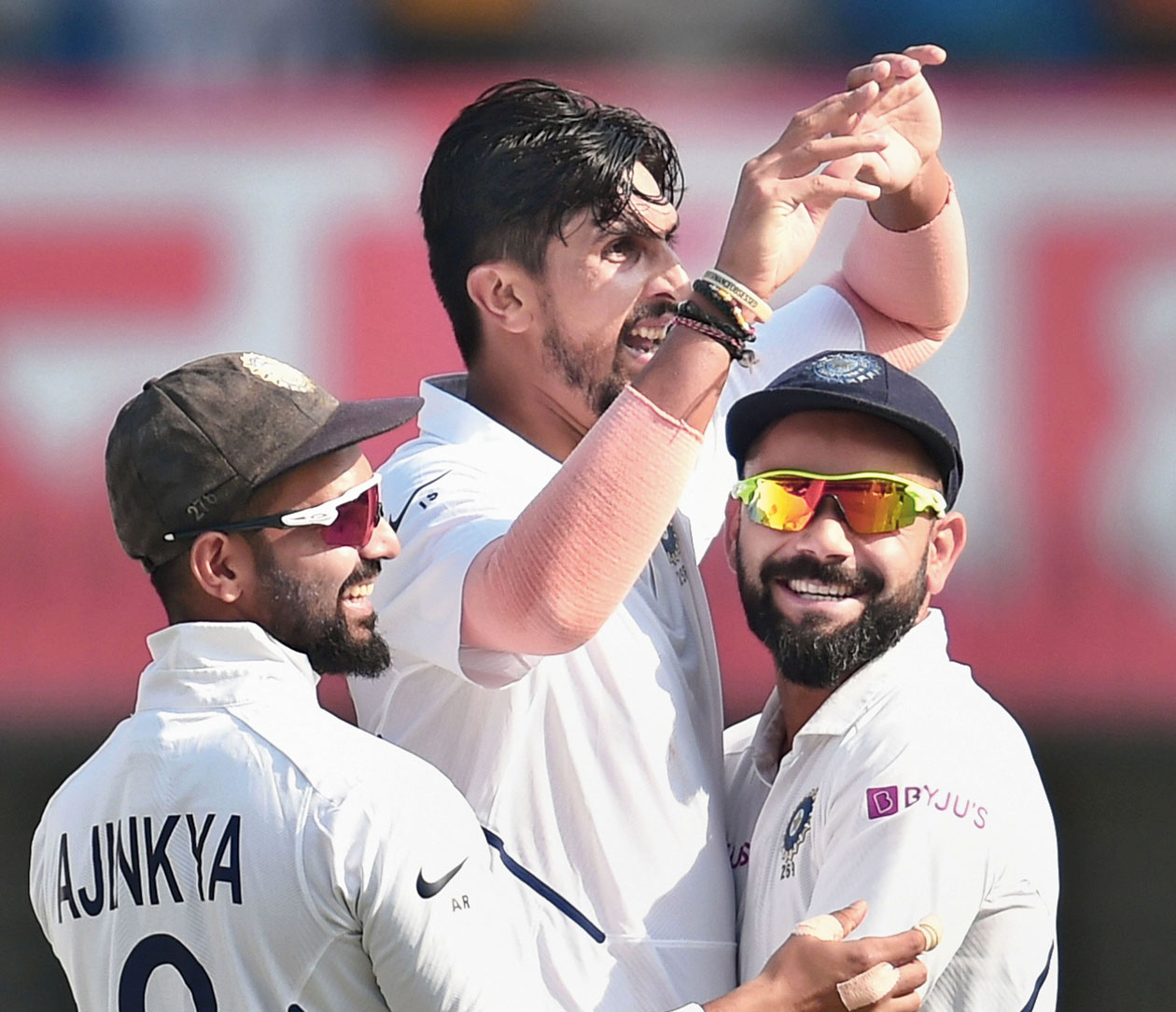 Ishant Sharma celebrates with Virat Kohli and Ajinkya Rahane the dismissal of Shadman Islam on the first day of the first Test in Indore on Thursday.
(PTI)
Sayak Banerjee   |   Indore   |   Published 14.11.19, 08:24 PM

India dropped three fairly simple catches, yet they had little to worry about at the end of the day.

Captain Virat Kohli would have to thank his pacers for that. Mohammed Shami, Ishant Sharma and Umesh Yadav extracted the maximum out of a helpful pitch, sharing seven wickets amongst themselves.

But at the same time, India also benefited from Bangladesh’s habitual mindlessness.

These two factors have helped India take a stranglehold over the first Test here at the Holkar Stadium as they are comfortably placed at 86 for one after bundling Bangladesh out for a paltry 150. From 99 for three, Bangladesh lost their next seven wickets for just 51.

At stumps on Day I, Mayank Agarwal (37 batting) and Cheteshwar Pujara (43 batting) were at the crease.

With a fair sprinkling of grass on the pitch, there wasn’t an iota of disappointment in Virat Kohli’s face on losing the toss. He rather said he would have opted to bowl first anyway had he won the toss.

From Bangladesh’s point of view, their decision to bat first on such a track was definitely surprising, but bold as well. In a way, it was a practical decision for they have gone in with an extra batsman (Mohammad Mithun) and don’t seem to be having quicks capable of making ideal use of this pitch. Their best chance was to somehow put runs on board and then try and put pressure on India.

Mustafizur Rahman, their most experienced among their bowlers, wasn’t considered for this Test as sources said Bangladesh want him fit and at 100 per cent for the pink-ball Test at Eden Gardens.

Unfortunately for Bangladesh, their batsmen came a cropper and just couldn’t withstand the pressure created by the Indian pacers’ control and disciplined bowling.

The visitors took as many as 20 balls to get their first run as openers Shadman Islam and Imrul Kayes looked clueless before the moving bowl and extra bounce. It was only a matter of time before Ishant and Umesh struck with the new ball. They got rid of the two openers in successive overs.

Just a bit more bounce after landing on the good length spot saw Kayes taken at gully, as Umesh drew first blood. In the very next over, Ishant pitched it up and late away movement found the edge of Shadman’s bat.

What was even more surprising was Mithun coming in at No. 4 instead of the more experienced and technically equipped Mushfiqur Rahim.

Shami, returning to bowl from the Pavilion End, pitching it on the middle-and-off stump with a bit more pace and that trapped Mithun plumb in front. India were right on top then with Bangladesh reeling at 31 for three.

Matters could have been worse for the visiting team had Kohli not shelled a chance at third slip off Umesh’s bowling, with Rahim only on three then. Rahim somehow survived the period till lunch along with captain Mominul Haque and early in the second over of the post-lunch session, he again got a reprieve with Ajinkya Rahane dropping an easy catch on this occasion off Ravichandran Ashwin’s bowling.

Rahim was on 14 then. Getting two let-offs, the stage was set for Rahim to show his resilience and determination, but Mominul’s untimely dismissal somewhat affected his rhythm.

Having done all the hard work for 138 minutes, Mominul all of a sudden preferred to leave a straighter delivery from Ashwin, only to see his stumps rattled.

Thereafter, India ensured they never loosened the noose on their opponents.