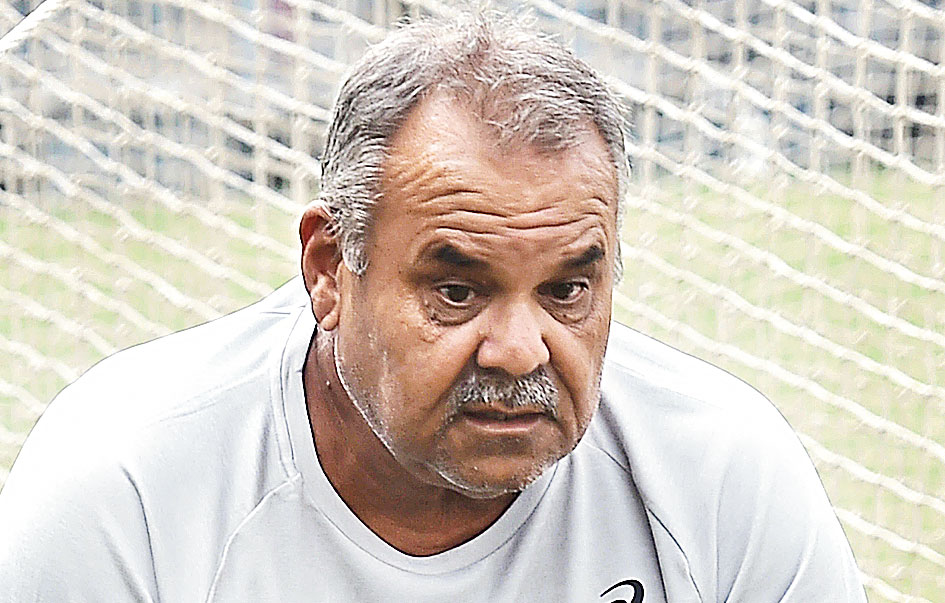 At 64 years and after more than two decades of cricket coaching across continents, Dav Whatmore still appears to have retained all his passion for the job.

Currently in charge of the Kerala cricket team, Whatmore was as active as anybody during an afternoon practice session at the Eden on Saturday. From enjoying a game of soccer preceding the net session, to correcting the batsmen’s technique, to lending a helping hand in giving them throwdowns, to enjoying a hearty laugh with them — one could find him everywhere.

Kerala, of course, take on hosts Bengal in a Ranji Trophy Elite Group B match at the Eden, beginning Tuesday.

The coach who won the World Cup with the Sri Lankan team in 1996, besides also coaching Pakistan, Bangladesh, Zimbabwe, the Kolkata Knight Riders and Lancashire, was happy to speak after the training session.

Whatmore agreed to the general opinion that India have a very good chance to win a Test series in Australia this time, but at the same time insisted that in no way can the Aussies be “underestimated”.

“India have a good chance… But you can’t underestimate Australia, particularly if all their fast bowlers are fit and healthy,” the Sri Lanka-born Australian said.

“But yes, it’s a good chance for India, I agree with one or two articles that I read on the subject which said that India can be victorious in Australia this time,” he added.

India had similar ‘good’ chances when they toured South Africa and England earlier this year. But despite all the promise and the hard work, ultimately Virat Kohli’s team had ended up on the losing side in both the engagements. While they lost 1-2 against the Proteas, they were thrashed 1-4 by the Englishmen.

Asked if there was anything that India could do differently to avoid a repetition of disappointment, Whatmore said: “Look, I won’t be telling (head coach) Ravi Shastri or (captain) Kohli how to do the job… But maybe, they will be better prepared this time. The experience of the previous two overseas tours will certainly help. They will be feeling good.”

Kohli is not just the captain of the team, he is also the best batsman in the line-up and a lot will depend on his success Down Under. Whatmore agreed with that.

“The Virat Kohli factor is very much there… He is the batsman around whom the team revolves. He is very positive and that rubs off,” he said in praise of the India captain.

There has been a lot of debate on the Australian way of playing cricket — the win-at-all-cost mentality — and their recent deviation from that path following the ball-tampering scandal in Cape Town. Whatmore, who has played seven Tests and a one-day International for Australia, was asked about it. He replied: “I don’t know... They (Australia) would still want to play aggressively I guess. But I don’t think they will be anything like what they used to be in the past. They will surely be pretty aggressive though.”

He, however, sounded a tad disappointed while discussing about the recent decline in the standards of Sri Lankan cricket.

“That’s the sad part… They used to be strong at home… Of late, that is slipping away a bit. I am sure there are many reasons for that, some of which I feel strongly about. But I can’t share none of them.”

Having been at the helm of the Knight Riders in the 2010 and 2011 editions of the IPL, Whatmore is not new to the city. And to his eyes, it seemed that the city has changed a lot in the last six-odd years.

“Here, it feels a bit like home. During the trip from the airport to the hotel on bus, I found that the city has changed a lot… It has improved,” he said.

It’s a different story though that he hasn’t changed much.