Hardik Pandya gets it all right in big match 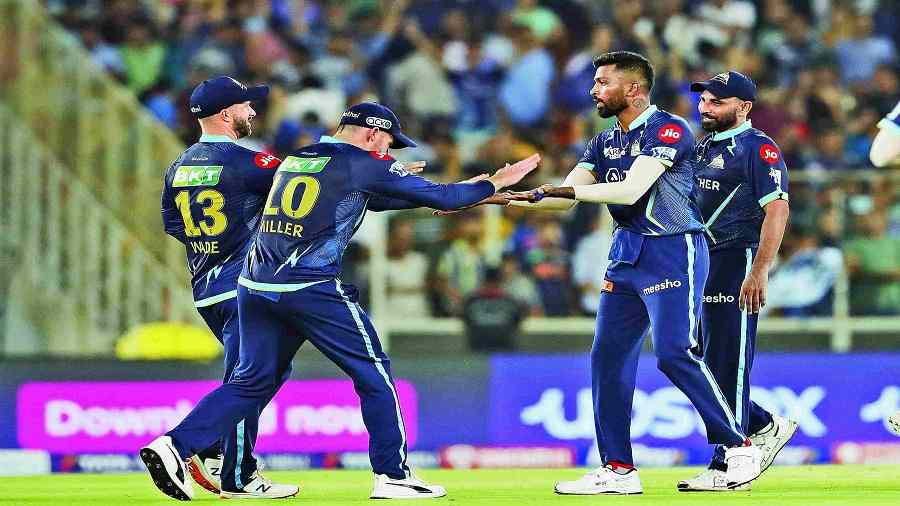 Hardik with teammates after dismissing Rajasthan Royals skipper Sanju Samson, one of his three wickets, in the final at the Motera
Twitter
Sayak Banerjee   |   Published 30.05.22, 01:47 AM

Hardik Pandya, the captain, has been lauded by many in IPL 2022. The batsman in Pandya too did a commendable job for the Gujarat Titans all through the tournament. And on Sunday, in the final at the Motera in Ahmedabad, it was Pandya, the bowler, who took centre stage, bowling his best spell (3/17) in the competition to first restrict Rajasthan Royals to 130 for 9, a total that was well below par.

Thereafter, showing excellent temperament with the bat after the Titans lost opener Wriddhiman Saha and Matthew Wade early, Pandya played a crucial knock of 34 off 30 balls in a significant 63-run stand with Shubman Gill (45 not out) that won his team the IPL crown in their debut season.

Yes, the IPL finally has a new champion.

The Titans still had a bit of work to do after Pandya’s dismissal off a beauty from Yuzvendra Chahal against the run of play. But Shubman and man-in-form David Miller (32 not out) played smart cricket to ensure the Titans a smooth seven-wicket victory in the final with 11 balls to spare. The triumph couldn’t have been more ideal for the Titans, especially as Pandya and his men could lift the trophy at their home ground.

The Titans, though, were a little bit fortunate as Shubman was dropped by Chahal off Boult’s bowling in the very first over of the run chase. That indeed proved to be a costly miss for the Royals.

The Royals had won a good toss on a wicket that was a little bit drier, offering more turn. But Pandya and his bowlers were spot-on in terms of the lengths they hit right from the onset. When they opted to bat, the Royals wouldn’t even imagine in their nightmare that they would not be able to reach even 140.

Particularly with Jos Buttler having regained his form after a slumber, the Royals would certainly have fancied a total of at least 160-plus. Besides, they also had a taste of the Motera conditions having thrashed Royal Challengers Bangalore in Qualifier II.

But all the Royals could manage were 11 fours and four maximums in the allotted 20 overs. And Buttler (39 off 35 balls) couldn’t hit any of those four sixes, though he was again the Royals’ top scorer.

Not trying to bowl too fast, Pandya focused solely on a proper line and length, ensuring the Royals had hardly any room to chance their arms. Conceding only two boundaries in his four overs, Pandya dismissed Royals captain Sanju Samson, Buttler and Shimron Hetmyer were Pandya’s in what turned out to be a dream spell, especially for a final.

Pitching the ball on the good-length spot, Pandya got the better of Samson, before inducing an edge off Buttler’s bat at a critical stage of the Royals innings.

Hetmyer fell thereafter in the last ball of the 15th over. The Guyanese too played a poor stroke that not just brought about his departure, but also virtually ended the Royals’ hopes of putting up a competitive total on board.

Alongside his bowling, the moves that Pandya made as a captain also worked well. Just as Buttler was looking to get into his groove, Pandya brought in the ever-consistent Rashid Khan (1/18), who made superb use of the Motera wicket, which Ravichandran Ashwin couldn’t quite.

Apart from sending back the struggling Devdutt Padikkal, leg-spinner Rashid kept Buttler quiet and that created pressure on the Royals.