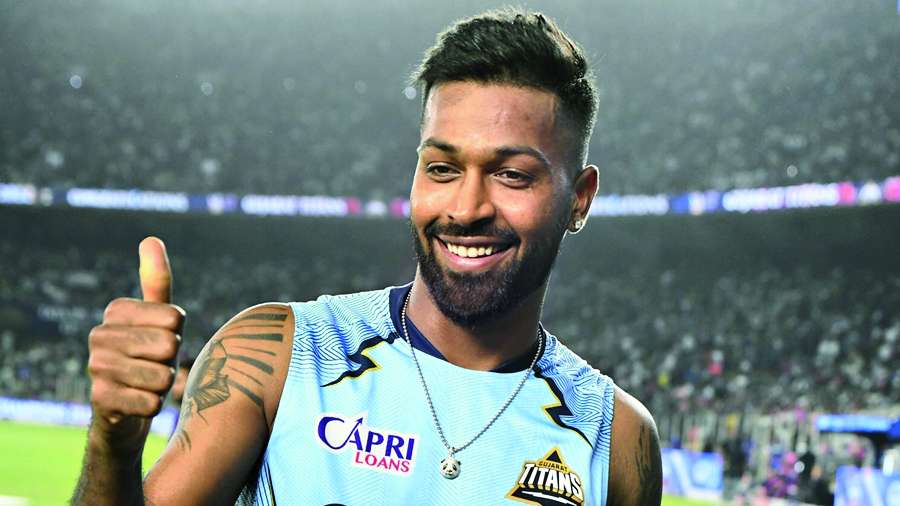 Moments after winning the IPL as Gujarat Titans captain in their debut season, Hardik Pandya revealed his next mission was to win the World Cup.

In another five months the all-rounder will get the opportunity to realise his dream in Australia. He came close to winning the World Cup twice in 2016 and 2019 but on both occasions his heartbreak happened in the semi-finals.

Hardik’s reincarnation has meant several options opening up for Team India. Finding the most appropriate slot for Pandya will be head coach Rahul Dravid’s biggest challenge. It could make the difference between winning and losing for the team.

Having reinvented himself at No.4, he played the anchor’s role to perfection and ended the IPL season as the Titans’ highest run-getter with 487 at an average of 44.27 and a strike rate of 131.26.

But will Dravid continue to play him at No. 4 when he has proved in the past that he is equally adept in a finisher’s role down the order? Pandya is one of those rare Indian power-hitters who has the ability to clear the big grounds in Australia. Remember his exploits during the T20I series Down Under in December 2020 when he ended as Man of the Series in their 2-1 triumph.

While the top-3 select themselves — Rohit Sharma, KL Rahul and Virat Kohli — Suryakumar Yadav has been tried at No. 4 because of his ability to build an innings while maintaining the run-rate. Perhaps slotting Surya at No.4 and Pandya next could be considered an option while alternating positions depending on the match situation.

“I wouldn’t call it transformation... Everybody grows and he has matured as a cricketer,” former chief national selector Kiran More told The Telegraph. “Coming back from an injury isn’t easy but he practised morning and evening to make it happen. He also worked hard on batting, bowling and diet too.”

More worked with Pandya for more than two months in Vadodara during his comeback trail. “We had a structured plan in place. It comprised batting one day followed by bowling, match simulation sessions besides playing matches. He is reaping the benefits of the hard work put in. His hunger and dedication stood out. Making the India team for the first time is easy when compared to staging a comeback,” More remarked.

The likes of Ishan Kishan and Shreyas Iyer will struggle to make the XI in such circumstances, form permitting, though the team management will relish the abundance of riches in hand.

Dinesh Karthik’s performance in the IPL has pitchforked the wicketkeeper-batsman in the finisher’s role but he will need to prove himself in the T20Is ahead of the showpiece event to be in the running. Pandya’s emergence has no doubt made it tougher for him since Rishabh Pant will always be the first-choice wicketkeeper.

The bowling front is even more crowded. If there was uncertainty over Mohammed Shami’s credentials in the shortest format ahead of the IPL, he has put the Doubting Thomases to rest. The fast bowler, who began the season with a first-ball dismissal of Rahul, ended with 11 powerplay wickets at an economy of 6.62 per over.

It remains to be seen if Shami stays Jasprit Bumrah’s new ball partner though Bhuvneshwar Kumar has once again underlined his effectiveness in this format, finishing with an economy of 7.34. Sunrisers Hyderbad’s Umran Malik has taken the stage by storm but how he fares in the international circuit during the coming months could decide his future.

Another rookie Mohsin Khan has been equally impressive. With an overall economy of 5.96, the left-arm fast bowler claimed six wickets and conceded just 5.25 runs per over in the powerplay. Mohsin hasn’t found a berth in the squad for the T20Is versus South Africa but Avesh Khan has been lucky. The selectors will have to look at Mohsin during some of the matches.

Last season’s highest wicket-taker Harshal Patel did struggle at times but Arshdeep Singh was a revelation. The young Punjab Kings pacer consistently stiffled the batsmen, especially in the death overs. Not many would dare to gamble with newcomers in a World Cup and it wouldn’t come as a surprise if experience gains credence over young guns on the flight to Australia.

Not much experimentation is expected among the spinners. Ravindra Jadeja is a certainty but Yuzvendra Chahal is expected to be favoured over Ravichandran Ashwin. The leg spinner finished the season with 27 wickets, the most for any spinner in a single IPL season.

Succeeding on Australian pitches wasn’t easy as Ashwin realised during his several visits. Kuldeep Yadav has also got back his mojo, perhaps for the first time since being termed as the “No. 1 overseas spinner” by Ravi Shastri after the 2019 Sydney Test. Wrist spinners are preferred over finger spinners in T20s because of their ability to impart more side spin and get variable bounce. Hence choosing the best combination will be a big task for the selectors.

In this season of comebacks and emergence of new faces, Pandya’s evolution has changed the dynamics of India’s team combination. The process to attain his mission will continue.