England stay in the hunt at Old Trafford

Pakistan have stretched their overall lead to 244, which may not be too easy to chase down on a wearing pitch 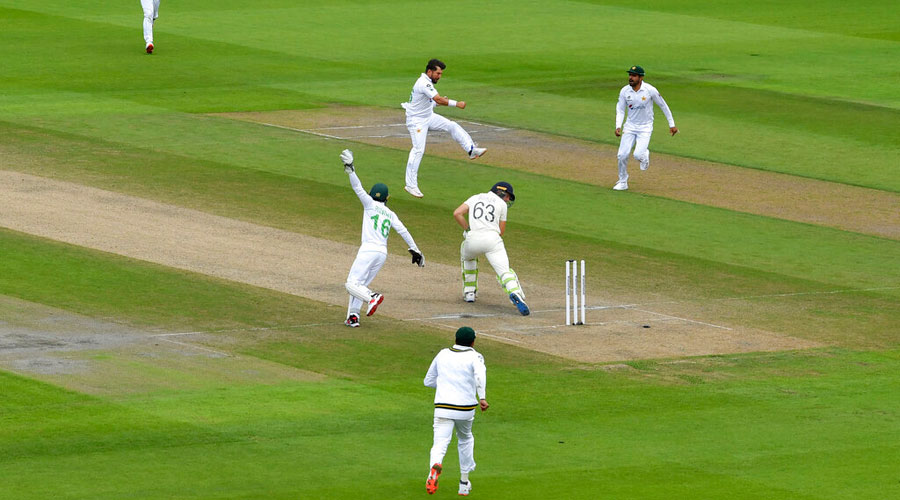 Yasir Shah jumps to celebrate the dismissal of Jos Buttler (center) during the third day of the first cricket Test match between England and Pakistan at Old Trafford in Manchester on Friday.
AP
Agencies   |   Manchester   |   Published 08.08.20, 04:09 AM

A mix of below-par batting by Pakistan and England’s accuracy more or less threw open the contest in the first Test at Old Trafford.

At stumps on Day III, Pakistan, after a healthy first innings lead of 107, stumbled to 137 for eight in their second essay.

They have stretched their overall lead to 244, which may not be too easy to chase down on a wearing pitch. But going into the penultimate day, England would certainly be able to breathe easier, for circumstances might well have been a lot worse, especially after they were bowled out cheaply in their first innings.

Stuart Broad, Chris Woakes and more importantly, Ben Stokes — finally having resumed bowling — struck twice each to hurt Pakistan, who were also laid low by their lacklustre show with the bat.

First innings centurion Shan Masood perished for nought, while Babar Azam too managed only five. Asad Shafiq is the top scorer so far with 29.

Earlier, leg-spinner Yasir Shah took four wickets as Pakistan bowled England out for 219 in their first innings, looking well in control then.

Yasir (4/66) was the standout performer with the ball as he got prodigious turn on the wicket, which should be suiting him more when England bat last.

The hosts had resumed the day on 92 for four and Ollie Pope (62) looked relatively assured as he moved to his fifth Test half-century.

But the threat from Pakistan’s seamers was ever-present and 17-year-old Naseem Shah got a delivery to rise sharply off a length, taking the edge of the bat and going straight to Shadab Khan at gully.

England’s decision to play an extra seamer then appeared to have backfired as they badly were in need of a specialist batsman. They may still feel so in the second innings too, provided Pakistan’s bowlers too don’t mess up.

Yasir, meanwhile, bowled Jos Buttler (38) between bat and pad, caught the edge of Dom Bess (1) for a fine catch at slip by Shafiq, before a skidding delivery castled Chris Woakes (19).