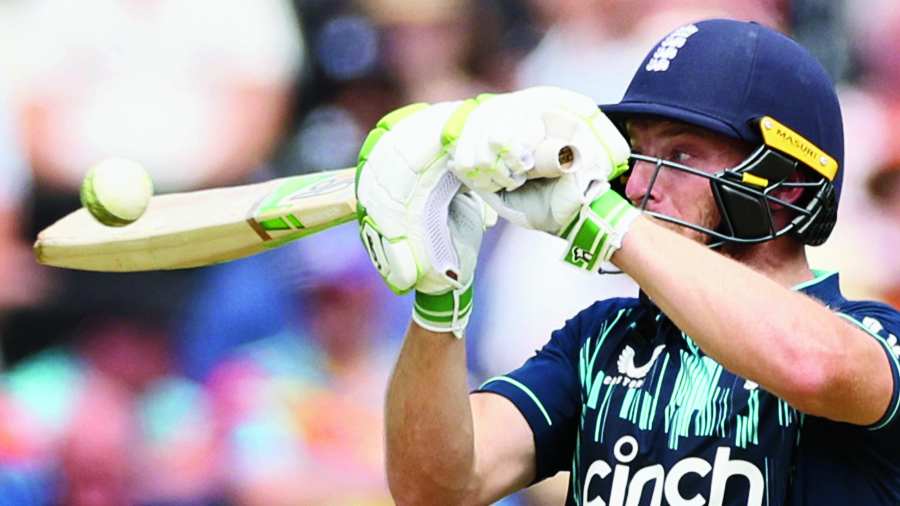 Jos Buttler of England on way to his unbeaten 162 against the Netherlands in Amstelveen on Friday.
Getty Images
The Telegraph   |   Published 18.06.22, 01:07 AM

England broke their own world record for the highest team total in one-day international (ODI) history after they scored 498-4 in 50 overs against a hapless Netherlands attack at Amstelveen on Friday. Jos Buttler, Dawid Malan and Phil Salt notched up centuries while Liam Livingstone scored England’s fastest ODI fifty. The previous record was England’s 481 against Australia in 2018.

Netherlands were dismissed for 266, giving England victory by 232 runs.

Malan (125) and Salt (122) laid the foundation for England’s record score with a 222-run partnership before Buttler (162 not out) came in and accelerated the scoring in what was a brutal onslaught on the Dutch bowlers.

In all, Buttler smashed seven boundaries and cleared the ropes 14 times while Livingstone, who reached his fifty in 17 balls, finished unbeaten on 66 off just 22 deliveries.

“It certainly feels like I’m in the form of my life. The IPL couldn’t have gone much better for me, so I was feeling in good touch coming here,” Buttler said after he was named the Man of the Match. “It was a really good wicket, we got off to a good start and that gave me the licence to really attack.”

England now have the three highest scores in ODI history, having also scored 444 against Pakistan in 2016.

The Netherlands — playing an ODI against England for the first time outside a cricket World Cup — had only a few moments to savour amid a barrage of big-hitting from the tourists, which led to a number of balls being lost outside the stadium.

Buttler and Livingstone both enjoyed a successful season in the Indian Premier League that ended last month. Buttler, playing for ultimate runners-up Rajasthan Royals, totalled 863 runs in 17 matches at a strike rate of a shade above 149 with four centuries.

Livingstone, who is part of the Punjab Kings franchise, notched up 437 runs from 14 games at a strike rate of a little over 182. Only Shikhar Dhawan scored more runs for Punjab Kings this season (460).

(Written with a report from Reuters)