At stumps on the penultimate day, the hosts were 37/2 in their second innings, having extended their lead to 219 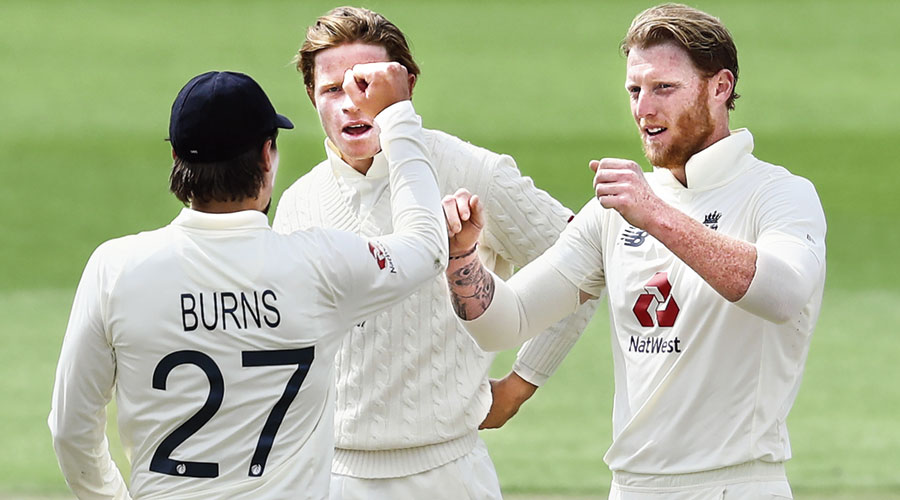 Stuart Broad and Chris Woakes made good use of the second new ball as England pressed for victory in the second Test at Old Trafford in their bid to level the series.

At stumps on the penultimate day, England were 37/2 in their second innings, having extended their lead to 219.

Showing the initiative to get quick runs to give themselves enough time for a shot at victory on the final day, England sent in Ben Stokes and Jos Buttler to open. But Kemar Roach removed Buttler in the very first over before castling Zak Crawley soon after.

The good thing for England, though, is that Stokes continues to look solid along with captain Joe Root, who’s batting on eight.

A draw, on the other hand, would help West Indies retain the Wisden Trophy.

The visitors, looking compact for most part of Day IV lost six wickets to the new ball for just 45 to give England a 182-run first innings lead.

Half-centuries from Kraigg Brathwaite (75) and Shamarh Brooks had guided West Indies to 227/4 at tea before Broad and Woakes cleaned up the tail with three wickets each. Brooks was the first to fall when Broad trapped him leg-before wicket for 68 and the England pacer struck again in his next over to castle Jermaine Blackwood for nought.

Broad continued to make the new ball talk in his following over to trap Shane Dowrich leg-before for a duck and the Windies wicketkeeper also cost his team a review. Woakes then got into the act to dismiss Windies skipper Jason Holder, reducing the visitors to 260/8 to give England hopes of enforcing the follow-on.

But a half-century from Roston Chase (51) ensured England would bat again before his resistance came to an end when Woakes rapped him on the pads.

The ICC’s modified guidelines were put into practice on Sunday after England’s Dom Sibley inadvertently used saliva on the ball, prompting the on-field umpires to disinfect the red cherry.

This is the first time that umpires intervened for sanitising the ball during an international cricket match since the new Covid-19 guidelines were announced by the ICC.

The incident happened just before lunch on Day IV.

Before the start of the 42nd over of the visitors’ first innings, umpire Michael Gough was seen rubbing a tissue on both sides of the ball to disinfect it.

The home team brought the matter to the notice of the umpires as soon as Sibley himself admitted to accidentally using saliva on the ball.