England close in on series victory

West Indies chase 399 with two days to go; hosts in search of 8 wickets 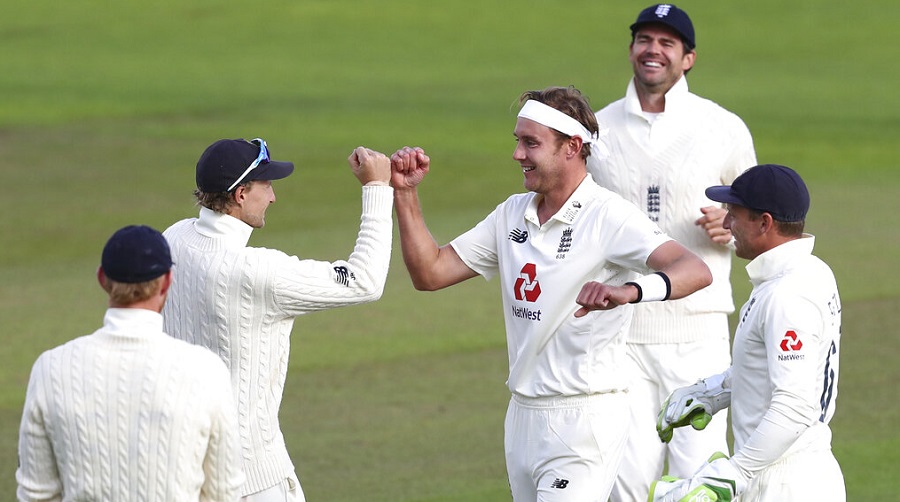 Stuart Broad celebrates the dismissal of John Campbell with teammates on Sunday
AP
Our Bureau, Agencies   |   Calcutta, Manchester   |   Published 27.07.20, 12:57 AM

England had West Indies reeling at 10/2 after setting them an imposing target of 399 in the third and final Test at Old Trafford with Stuart Broad again dominating, as he is now just one away from 500 Test wickets.

Broad, who had taken four more wickets in the visitors’ first innings in the morning session of Day III, continued with his super work as he removed opener John Campbell, who departed for nought, and then nightwatchman Kemar Roach after the Windies were put in for the last six overs of Sunday.

England had declared on 226 for two in their second innings as Rory Burns scored 90, Joe Root a quick-fire 68 not out and Dom Sibley 56.

They accelerated in the final session, seeking to build on a large lead as well as have enough time to bowl the Windies out again and win the Test, thereby wrapping up the series.

England were hastened by the possibilities of Monday’s play being heavily curtailed by rain, which would then leave them the final day’s play on Tuesday to try and engineer victory.

Burns had to sacrifice the personal milestone of a Test century to allow England a chance to bowl at the Windies at the fag end of the day, in search of early inroads.

He abandoned the studied approach that got him to the 80s and was out when he skied spinner Roston Chase straight up into the air and caught by the substitute wicketkeeper Joshua Da Silva.

Root was not out, scoring his runs off just 56 balls as he went after the bowling with characteristic flair.

Sibley was the first England wicket to fall after a 114-run partnership with Burns, trapped leg-before wicket by Windies captain Jason Holder.

England began their second innings just before lunch after Broad finished with figures of 6/31 in 14 overs, mopping up the lower order and the tail to dismiss the Windies for a paltry 197 in the first innings to give his side a substantial 172-run lead.

But it took a frustrating 54 minutes for England to get a breakthrough after the Windies had resumed on 137/6, facing the possibility of being asked to follow on.

Holder led the fightback as he scored an important 46 runs to help his side avoid the follow-on before Broad had him leg-before.