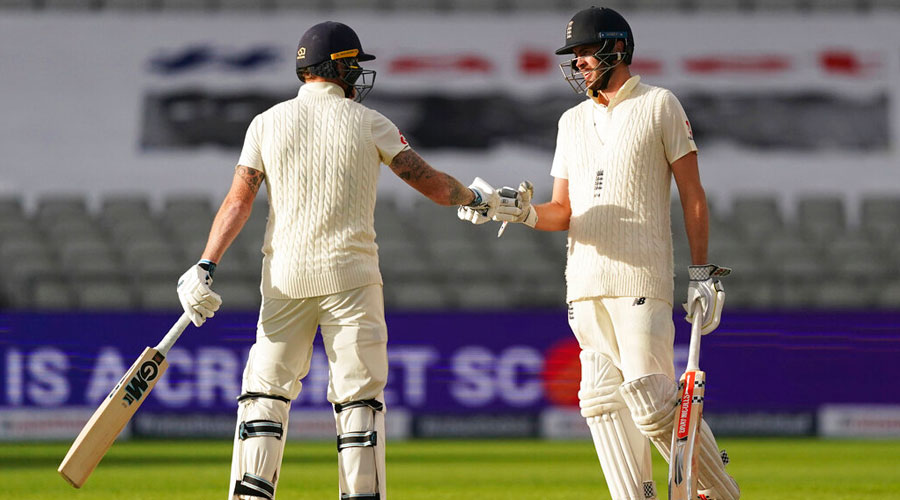 England's Ben Stokes, left, and Dom Sibley tap their gloves at the end of the first day of the 2nd Test match between England and West Indies on Thursday
Agencies   |   Manchester   |   Published 17.07.20, 04:07 AM

Opener Dom Sibley and Ben Stokes led England’s recovery as they finished at 207/3 on the opening day of the second Test at Old Trafford after being put into bat by the West Indies.

Sibley was batting on 86 with Stokes on 59. The duo have so far put on a cautious but steady 126-run stand for the fourth wicket that has England better placed than the visitors.

Both batsmen certainly deserve credit as they had to keep batting in overcast conditions and that too, from a precariously placed position, especially with captain Joe Root — returning in place of Joe Denly — back in the hut after the team total was only 81.

For Sibley, it was indeed a bit of a struggle out there in the middle, while he was dropped as well by rival skipper Jason Holder off Shannon Gabriel in the final session. But he showed enough grit to hang in there, while Stokes too deserves huge credit for curbing his instincts and preferring to be watchful as the ball swung for most part of the day.

The Windies pacers too were guilty of not making the English batsmen play enough, bowling either too wide of the off stump or spraying down the leg side.

They also suffered a setback when Gabriel, who claimed nine wickets in the first Test, left the field earlier in the day to get treatment on reporting a groin issue.

The lunch break was bookended by a pair of wickets for  Roston Chase, who dismissed the other opener Rory Burns and Zak Crawley with his part-time off-spin.

Chase trapped Burns leg-before for 15 at the stroke of lunch, while Crawley flicked his first ball straight to Holder at leg-slip.

Root, who missed the first Test to attend the birth of his child, stitched a 52-run partnership together with Sibley before Alzarri Joseph removed him with an outswinger. It was the fourth time Joseph dismissed the England captain in Tests.

England are without Jofra Archer after the fast bowler breached the team’s bio-secure protocols.