According to sources in the NCA, the 29-year old quick has been able to bowl with full run-up as well as at his actual pace since last week itself 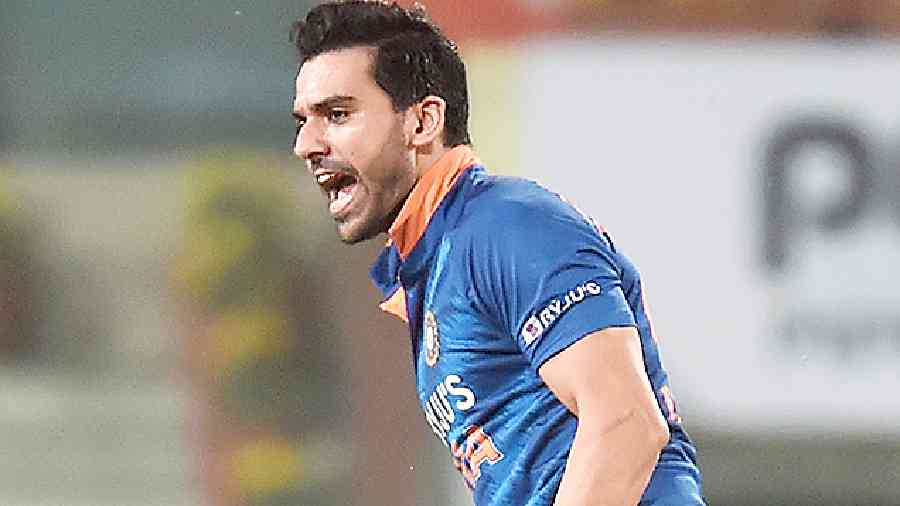 Pacer Deepak Chahar is upbeat about attaining prime fitness before the India squad gets finalised for the tour of Zimbabwe next month.

A quadriceps tear had sidelined Chahar after the third and final T20I versus the West Indies at Eden Gardens back on February 20, which was his last competitive game. He has since missed the home series against Sri Lanka and the whole of IPL 2022.

Chennai Super Kings had roped him in for Rs 14 crore at this year’s auction in Bangalore. Sustaining a back injury as well during his rehab at the NCA (National Cricket Academy) in Bangalore had forced Chahar out of the IPL. Working on his recovery over the last few months also ruled him out of India’s home T20Is versus South Africa, the Ireland tour and the recent limited overs matches versus England.

The back injury, which had also troubled him during late 2019, obviously prolonged his stay at the NCA.

But over the last few days, Chahar has been in far better shape and made good progress under the watchful eyes of NCA fast bowling coach Troy Cooley. The 56-year-old Cooley has been in regular touch with Chahar’s strength and fitness trainers.

No doubt Chahar would have been happier on making the squad for the Windies tour that begins with the first of the three ODIs on Friday.

But he’s quite confident of returning to the team for the three ODIs versus Zimbabwe beginning on August 18 followed by the Asia Cup, which is likely to begin in the last week of next month.

“I’m quite pleased with my recovery, and I believe I’ll be able to make the squad for the Zimbabwe tour and then the Asia Cup,” Chahar told The Telegraph from Bangalore.

“I’ve also been bowling in the emerging team camp here and do feel a lot better as I’m going on to bowl. Fitness-wise, I’m in a much better place.”

According to sources in the NCA, the 29-yearold quick has been able to bowl with full run-up as well as at his actual pace since last week itself.  “After quite some time, he bowled with the red ball back on Monday and sent down five overs in match simulation for the emerging team camp players.

“He looked quite sharp during the spell. He took a break today (Wednesday), but he’ll be present for the entire duration of the practice match tomorrow (Thursday),” one NCA insider said.

“When you have already had a decent amount of exposure and experience at the international level, you need to sort out most of the stuff out on your own. The same goes for me.

“But yeah, with someone like him (Cooley) around and regularly monitoring your progress, you get to know the actual picture and if there’s any area or two where you may need to do a bit of fine-tuning,” Chahar explained.Cooley’s presence at the NCA also sped his recovery process in some way, Chahar acknowledged.