7 unvaccinated U-19 players were denied entry into Caribbean 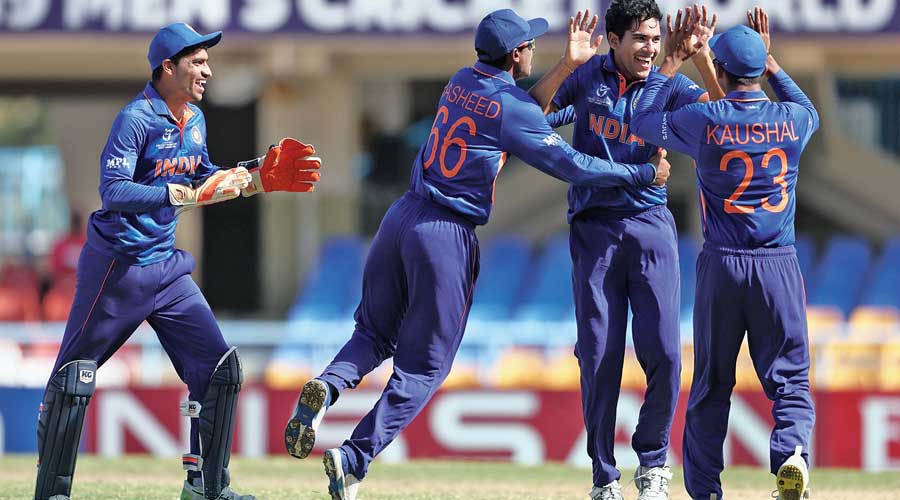 The COVID-19 outbreak in its camp was not the only off-field challenge the Indian team overcame on its way to the U-19 World Cup triumph.

India's problems began on arrival in the Caribbean islands, with as many as seven unvaccinated members of the side detained at the airport for more than 24 hours, requiring the government to step in and resolve the issue.

This was after a long flight from Dubai to Port-of-Spain via Amsterdam. Left-arm pacer Ravi Kumar, who played a huge role in the team's unprecedented fifth World Cup triumph, and opener Angkrish Raghuvanshi were among the players who were told to "go back to India" as they were not jabbed.

Team manager Lobzang G. Tenzing, who came to their rescue with the help of the ICC and colleagues in the BCCI, narrated the "harrowing experience" of the players. The India and Trinidad government, too, had to step in to resolve the situation.

"After we landed at Port-of-Spain, we had to take a charter flight to Guyana but seven of our boys were stopped as they were not vaccinated. We tried to explain to the immigration officials that India had not started their vaccination yet but they instructed us to take the next flight out of the country," Tenzing, who heads the Sikkim Cricket Association, told PTI.

"We were surrounded by security guys of the airlines as if we would run away from there. And as the argument was on with airline and immigration officials, the only Lufthansa flight available had departed and the next one was after three days. That gave us time to negotiate with local authorities.

"I decided to stay with the boys and we had to stay in a shady hotel near the airport for the night. It was only after the intervention of ICC and local government the matter could be resolved. It was quite a harrowing experience for the boys," he recalled.

This happened in the first week of January when India started the vaccination drive for the 15-18 age group.

In the Caribbean for the biggest event of their lives, the players were inconsolable.

It was not just five players, entire administrative team got down with COVID

The Indian contingent's troubles in the Caribbean had only begun and soon after the detained players were allowed to join the team in Guyana, a COVID outbreak jeopardised the team's participation in the tournament.

The squad did not have its captain Yash Dhull and his deputy Shaik Rasheed for two of the three league games due to COVID-19. The players testing positive only came to light before the second league game against Ireland but the virus in the camp came when the team's SLO Ravindran returned a positive test during a five-day quarantine in Guyana.

Team manager Tenzing and the logistics manager then got infected, sending the contingent into an administrative crisis.

"In all probability, our SLO caught the virus on the way to Caribbean from Dubai where we were playing the Asia Cup. And gradually it spread in the camp.

"The RTPCR test results would take as long as 48 hours and that contributed to the problem," said the Sikkim cricket chief, having played the role of the troubleshooter.

'Tournament bio-bubble was a joke, the authorities were lethargic'

The ICC had organised the event with the help of Cricket West Indies. In a challenging time like this, the Caribbean was not the best place to organise a big event like the U-19 WC, felt Tenzing. "It poses additional logistical issues and people were lethargic."

The Indian team had the most comfortable stay in Antigua where they played knockouts and the toughest time in Guyana where they quarantined before playing their opener against South Africa.

"Our time in Guyana was tough to say the least. When I and my colleagues were down with COVID, no medical help was provided, no doctor, no medicines. Our team physio came to our rescue. It was like a system failure.

"In the hotel we stayed there were no separate floors for teams. We were staying on the same floor as other hotel guests. There was nobody to man the isolation period. The rooms did not have regular running water and players faced food issues. "Luckily few Indian restaurants close by helped us on that front.

"During practice games, the stadium had no water in the washrooms. I can safely say we, state units and the BCCI do a much better job staging domestic events in a bio-secure environment," added Tenzing.