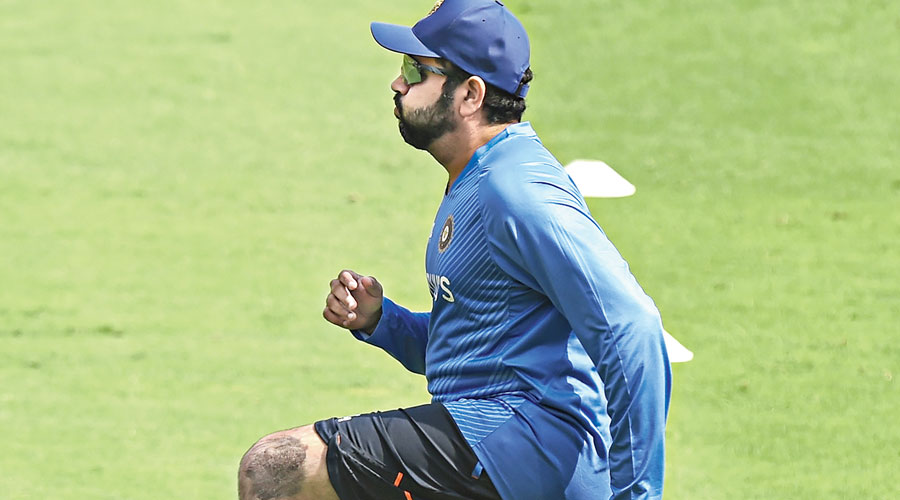 India white ball captain Rohit Sharma at the Motera stadium in Ahmedabad on Saturday, the eve of the first ODI against the West Indies.
PTI Photo
A Staff Reporter   |   Published 06.02.22, 01:09 AM

Though Rohit Sharma is very much in contention to lead India in Test cricket as well, questions related to Test captaincy don’t seem to be going down too well with him.

On the eve of the first ODI versus the West Indies in Ahmedabad, Rohit was asked about his thoughts on leading India in Tests. And while responding, he did seem a little annoyed.

“Well, there is still time for that (Test captaincy). Please let’s just focus on the limited-overs series which is before us now.

“My focus at present is only on the West Indies series, the three ODIs and three T20Is. That’s all,” was Rohit’s terse reply.

Even though his focus is entirely on the coming six matches versus the Windies, Rohit will not be making any drastic change to the attitude and approach of the team or the template that was set during his predecessor Virat Kohli’s captaincy.

“When Virat was captaining, I was the vice-captain. So we pretty much went about with the team in similar fashion. I just have to take it from where Virat has left,” India’s white-ball captain said. “There’s nothing that I need to come in and change drastically.”

“It’s just that adaptability and being open to do different things at different points, that is what we have spoken about,” he said.

Rohit also spoke about workload management, saying players would need to be rotated while youngsters too will get their fair share of opportunities looking forward to the T20 World Cup this year and the 2023 (50-over) World Cup.

Team India needs proper finishers in its squad, Rohit acknowledged, particularly as back-ups for the likes of Ravindra Jadeja and Hardik Pandya. “A finisher’s role in ODIs is very important, but since Mahendra Singh Dhoni’s retirement, we haven’t got anyone who could fit in that role,” Rohit said.

“We’ve tried Hardik. Even Jadeja has played, but we need to create more back-ups for that slot. Hopefully, the guys getting chances in this series will consolidate their position in the team.”