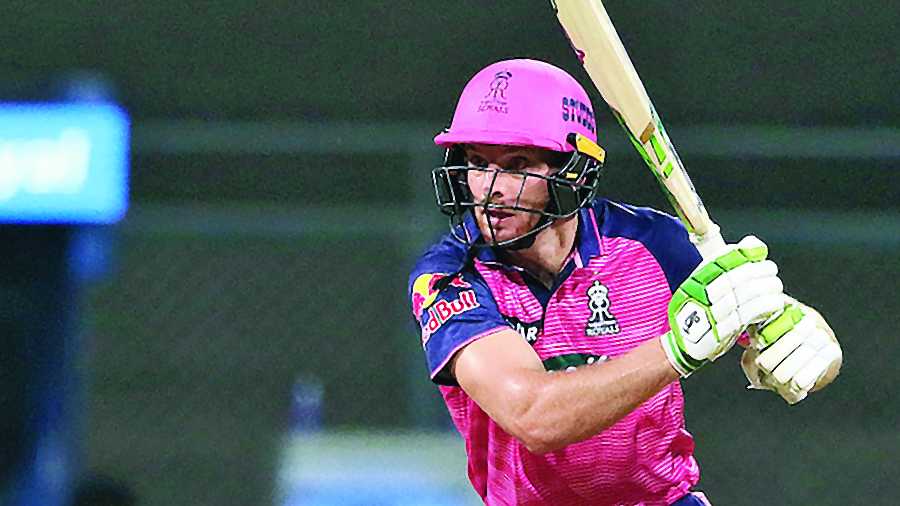 Eoin Morgan must be a worried man. With the T20 World Cup less than six months away, the England limited-overs captain should have been left wondering if the explosive Jos Buttler has reserved his best for the IPL.

The Rajasthan Royals opener recorded his third — second consecutive — century in this edition at the Wankhede Stadium in Mumbai. Friday’s 116 off 65 balls against Delhi Capitals was certainly more explosive than the ones he achieved against Mumbai Indians and Kolkata Knight Riders.

It was enough to put the skids on the Capitals’ chase. The prospect of having to face a mammoth 223-run target did intimidate their batters. Admirable bowling by the spin duo of Ravichandran Ashwin and Yuzvendra Chahal in the middle overs also hastened their fall.

There seemed a faint hope till Rishabh Pant hung around, a positive start notwithstanding. Mindless slogging by Lalit Yadav and Rovman Powell did rekindle their chances but Prasidh Krishna was brilliant in the 19th over. Even three consecutive sixes in the final over proved inadequate. The Capitals ultimately fell short of the target by 15 runs.

Buttler had a sedate start, troubled by Khaleel Ahmed’s away swingers. But once he smashed two sixes off Khaleel in the sixth over, he showed why ‘Jos the boss’ is regarded so highly in this format. With Devdutt Padikkal also in sublime form, they made a mockery of the Capitals attack.

It was exhilarating stuff as the Capitals bowlers struggled to find the right length. Short balls were pulled mercilessly while those with fuller lengths were driven through the line on both sides of the wicket. There were also those slogs over mid wicket.

Once the spinners came on, Buttler repeatedly went over the top.

In the absence of Ricky Ponting, who was forced to isolate after a family member tested positive for Covid-19, the Capitals looked short of ideas as the Royals opening pair plundered runs at will.

Pant looked bereft of ideas once his leadership skills were put to the test. He also got his calculation wrong when it came to Shardul Thakur. The pacer was their best bowler on view, giving away only nine in his first two overs, but ended up with only three overs.

Buttler completed his century off 57 balls and put on 155 in an opening stand with Padikkal (54 off 35). Once Padikkal was dismissed, Sanju Samson (46 off 19) played a gem of an innings. The captain ended it with a six which helped the Royals put on 67 runs in the last five overs.