Australia beat England by 9 wickets in the first Ashes Test 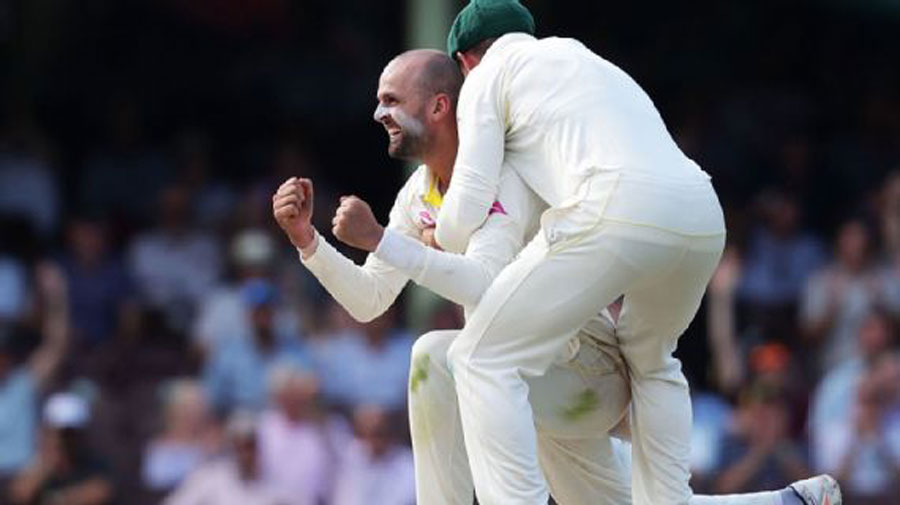 Australia won the Ashes series opener by nine wickets on Saturday with 1 and a half days to spare after Nathan Lyon picked up his 400th test wicket and quickly added three more to dismantle England's bid to save the first test.

England resumed Day 4 at 220-2 and Lyon struck in the fourth over, triggering a collapse that netted eight wickets for 77 runs as the visiting team finished the match in a similar vein to how it started.

After restricting England's second innings to 297, the Australians needed just 20 runs to clinch the match.

They did it in 5.1 overs, for the loss of only makeshift opener Alex Carey (9), with Marcus Harris (9 not out) hitting a boundary to finish off.

Lyon triggered England's demise when he dismissed Dawid Malan to end a 162-run third-wicket stand. With that, he joined retired legspinner Shane Warne (708) and retired paceman Glenn McGrath (563) as the only Australians to surpass the 400-wicket barrier in test cricket.

The 34-year-old offspinner was the 17th overall in international cricket, a list topped by Sri Lanka spinner Muttiah Muralitharan, who took 800 between 1992 and 2010.

Lyon finished with 4-91 for the innings.

Carey, as well as moving up the order to open in the second innings because of David Warner's forced relegation for not fielding on Day 3, took a record eight catches for a wicketkeeper on test debut.

After being dismissed for 147 in the first innings and surrendering a 278-run first-innings deficit when Australia replied with 425, England revived some hope of challenging in the first test when Malan and Joe Root defied the attack for almost two full sessions on Friday.

But the defiance didn't extend long into Day 4, with Malan (82 from 195 balls) getting an inside edge from Lyon to Marnus Labuschagne at bat-pad. Lyon took his 399th wicket in January and had to wait almost 11 months for No. 400 because the Australians didn't play another test in 2021 until this week.

Root added only three runs to his overnight score, making it to 89 his highest score in an Ashes test Down Under before his 165-ball knock ended when he was caught behind off allrounder Cameron Green in the seventh over of the morning.

Lyon chimed in again when he had Ollie Pope caught by Steve Smith in the slips in the next over as England slipped from 222-2 to 234-5.

The slide continued when Australia took the new ball, with Ben Stokes (14) squared up by a sharply-rising ball from Pat Cummins and edging to Green in the gully, and Jos Buttler (23) caught behind off Josh Hazlewood's bowling.

At that stage, England was 268-7, and still needed 10 runs to make Australia bat again.

Lyon returned to dismiss Ollie Robinson (8), inexplicably reverse sweeping to point, and bowl Mark Wood (6) before Green finished off the England innings when he had Chris Woakes (16) caught behind.

A power outage at the broadcast compound cut the TV feed for at least 15 minutes on Saturday, and created another round of technology issues for the match officials.

On Day 1, the TV umpire wasn't able to access ball-by-ball replays to review front-foot no-balls and there were 12 that went uncalled in the first session. On Days 2 and 3, the technology used to register snicks light contact between bat and ball wasn't available in the Decision Review System, either.

The five-match series moves to Adelaide, where a day-night test starts Thursday.