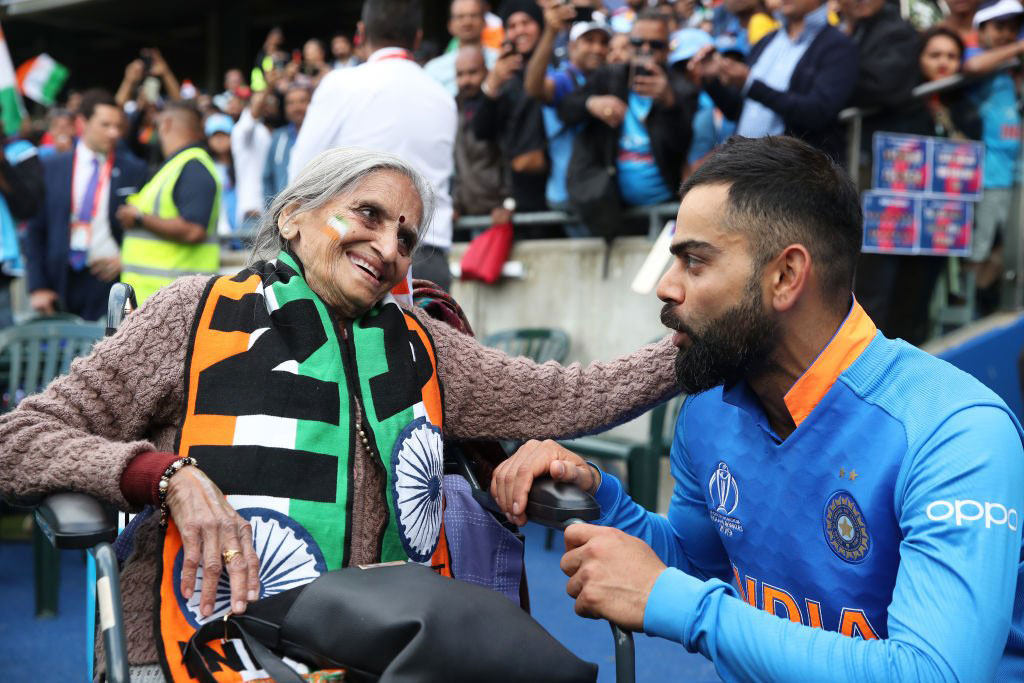 Age is just a number; young and old are just words.

This was proven by an octogenarian in the stands of yesterday's ICC Cricket World Cup match between India and Bangladesh.

Charulata Patel, 87, was seen sitting on a wheelchair in the stands and cheering for the Indian cricket team. 'Watching them (India) play there, I feel my kids are playing there,' she said during the match.

Cameras caught the Tanzanian-born blowing into a trumpet while cheering with fellow Indian supporters.

Mrs. Patel Born in Tanzania . Living in UK still Indian at heart.
20 crore pi$$fuls:- born in India. Paying no taxes. Living on subsidiary. Still Pakistani Bangladeshi and belong to 56 countries of pi$$fuls at heart but not Indian.

After India won the match by 28 runs and proceeded to the semis, skipper Virat Kohli and man of the match Rohit Sharma headed straight to the 87-year-old and acknowledged her.

She was ecstatic on meeting them and said that it felt like she was meeting her own children.

One of #TeamIndia's passionate fans, Charulata Patel ji all smiles as she blesses @imVkohli for the remainder of the tournament. #CWC19 pic.twitter.com/DQyEzt5dDH

Following the match, captain Kohli took to Twitter to thank his fans, the 87-year-old, and said: 'Age is just a number, passion takes you leaps & bounds. With her blessings, on to the next one.'

Also would like to thank all our fans for all the love & support & especially Charulata Patel ji. She's 87 and probably one of the most passionate & dedicated fans I've ever seen. Age is just a number, passion takes you leaps & bounds. With her blessings, on to the next one. 🙏🏼😇 pic.twitter.com/XHII8zw1F2

She seemed to be confident with the fact that India will lift the trophy. 'I pray to Lord Ganesha that India wins (sic). I bless the team always. When Kapil paaji won the World Cup in 1983, I was there as well,' she said to ANI.

#WATCH 87 year old Charulata Patel who was seen cheering for India in the stands during #BANvIND match: India will win the world cup. I pray to Lord Ganesha that India wins. I bless the team always. #CWC19 pic.twitter.com/lo3BtN7NtD

Cricketers , former players and commentators were also very happy to see Charulata Patel's enthusiasm and love for the game and the Indian cricket team. They did not hold back and expressed their appreciation and love for the superfan who was born in Tanzania and lives in the UK.

Stunning visuals at the #IndiaVsBangladesh match today. Captured this picture. It has to be the best picture of the entire tournament. Salute for her spirit nd energy 👏 @StarSportsIndia @ICC pic.twitter.com/ey0fSIi5h0

Beautiful game, beautiful fans with tremendous passion and such a lovely and heart-warming gesture ! #IndvBan https://t.co/tVawW7MCAy

The chairman of the Mahindra Group, Anand Gopal Mahindra, was also bowled over by her enthusiasm and said that he would 'reimburse' the 87-year-old's World Cup tickets.

Find out who she is & I promise I will reimburse her ticket costs for the rest of the India matches!😊 https://t.co/dvRHLwtX2b

It wasn't just cricketers and businessmen who were won over by Charulata Patel. Economists, political parties, people from the film fraternity, almost every one on the internet was expressing their enthusiasm for the octogenarian.

#CharulataPatel & @imVkohli huge fans of both today. One for her spirit & the other for his grace. pic.twitter.com/fx7qj9WFlQ

A beautiful gesture. #ViratKohli spotted chatting up with 87 year old Charulata Patel who literally stole the show in #INDvBAN match in #CWC19 She is a rockstar enjoying the cricket. #TeamIndia pic.twitter.com/ZNTK1vsJJ4

Great to see the Fan of the Match — 87-year-old Charulata Patel showing the world that age is just a number. She was cheering for Team India & was so passionate that the entire world sat up and took note of it. In the end Rohit Sharma & Virat Kohli met her as well. Sweet gesture pic.twitter.com/MITaJZVKuJ

We know her now. She's 87-year-old Charulata Patel, and she says, "This is MY team. They are like MY kids."

87 year old, her name is Charulata Patel (Gujju, obviously). What energy and enthusiasm for her age. 🙏 pic.twitter.com/iP1KgHg8qi

Age is no limit 😎 WOW.. @BrianLara calls her pictures as his best pick from this #CWC19.. Superb to see this veteran fan enjoying the #INDvBAN match.. pic.twitter.com/F72HoiqF63

India will face Sri Lanka next on Saturday and members of the Twitterati are hoping to again see the superfan in the stands.