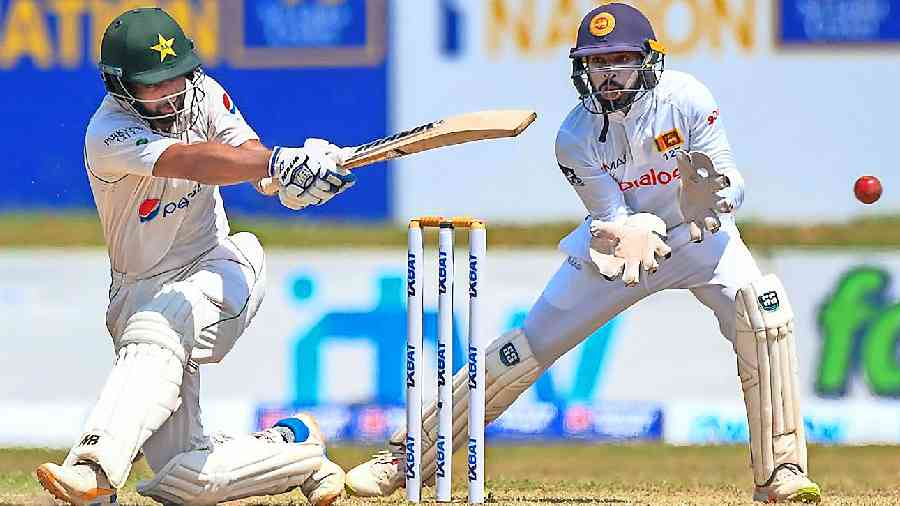 Abdullah Shafique scored an unbeaten 160 to lead Pakistan to a record run chase and a four-wicket victory over Sri Lanka in the first Test that went ahead in spite of a political and economic crisis in the island nation.

His 408-ball innings contained six boundaries and a six. Shafique, however, did get a few reprieves. He was lucky to survive an lbw appeal when on four. He was dropped on 135 when Dhananjaya de Silva missed a return catch and again on 151 as Pakistan closed in on the win.

A rain delay after lunch on the final day slowed down Pakistan’s push for victory with 11 runs still required, but it was just a matter of time. With this win, Pakistan moved up to third in the World Test Championship points table.

Their win also pushed Sri Lanka down to sixth, while India are now fourth in the standings.

The previous highest successful run chase at the Galle International Stadium was Sri Lanka’s 268 for 4 against New Zealand in 2019. “We knew that the set batsmen had to score big,” Shafique said after his match-winning knock.

“The early part was always going to be tough, but once you are set, you can score big runs here. “It certainly was a great effort. I’m pretty happy with what we have achieved here.”

Together with the other overnight batsman Mohammad Rizwan, Shafique added 71 runs for the fourth wicket to help Pakistan inch toward the victory target of 342.

Rizwan eventually fell for 40 when Prabath Jayasuriya trapped him in front of the stumps, leaving Pakistan with 70 more runs with six wickets in hand. Sri Lanka also claimed the wicket of Agha Salman (12) in the last over before lunch on Wednesday, when Jayasuriya had him caught behind.

The wicket though had eased out with a lack of bounce helping the batters. Sri Lanka didn’t help their cause by spreading the field, which allowed the Pakistani batsmen easy singles.

Babar: Our self-belief stood out

Pakistan captain Babar Azam hailed his team’s self-belief, which he feels played a key role in their magnificent four-wicket win over Sri Lanka in the first Test in Galle.

“Self-belief of the entire group played a huge role in our victory. As a team, we believed that we could win this game if we stepped up a little bit,” Babar said on Wednesday.

“We have been putting a continuous effort. It takes a bit of time, but we can see the result now.” Babar was effusive in his praise for opener Abdullah Shafique, who scored a match-winning 160 not out to take Pakistan home.

“Abdullah showed a lot of confidence and patience, which are both primary in Test cricket.

“The track was a bit tricky and helped spinners to a fair extent. But you still need to trust your basics and your game, which Abdullah did. “As captain, I’m proud to have a player like him, who at such a young age played with such a huge amount of confidence,” the skipper said.

Babar also highlighted the contribution of Pakistan’s bowlers along with the vital runs their lower-order batters scored in the first innings.