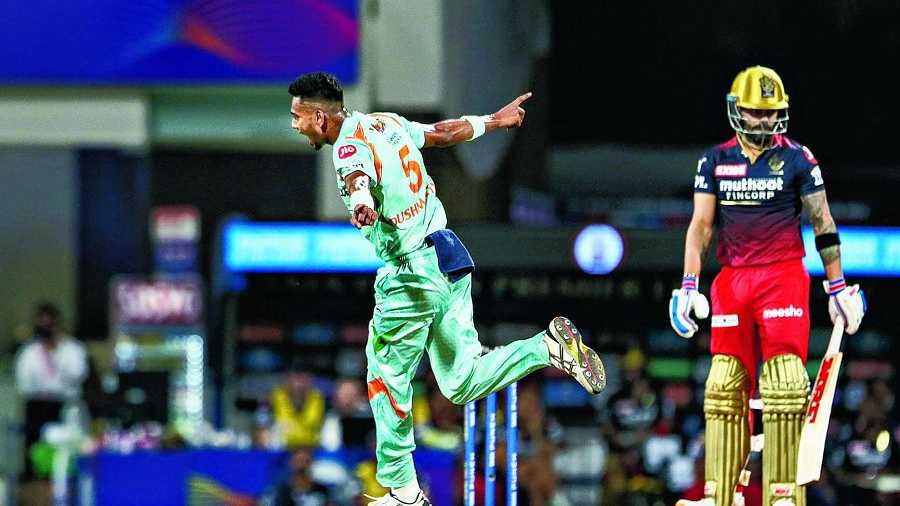 Dushmanta Chameera celebrates after dismissing Virat Kohli for a first-ball duck during their match at the DY Patil Stadium on April 19.
PTI
Indranil Majumdar   |   Published 28.04.22, 02:00 AM

Fifteeen years ago, Rahul Dravid did the unthinkable in the lead-up to the T20 World Cup in South Africa. As India captain, he convinced Sachin Tendulkar and Sourav Ganguly to skip the inaugural edition in 2007, which was then considered a “game for the youngsters”.

Dravid called up Dilip Vengsarkar, then chairman of selectors, from England to inform that the Fab Three — Sachin, Sourav and Dravid himself — be not considered for selection since he felt that was “the way forward for Indian cricket”.

A mostly unknown and young crop of cricketers triumphed under Mahendra Singh Dhoni defeating Pakistan in the final in Johannesburg. The victory changed the dynamics of Indian cricket.

Dravid, now the Team India head coach, could face a similar situation in his bid to overhaul the T20 squad ahead of the World Cup in Australia. After the debacle in Dubai last year, Dravid knows he needs a bunch of potent cricketers who can adjust to the increasing demands of this format.

Virat Kohli’s recent dipping fortunes have already cast a spell of uncertainty over his T20I career. The lean phase in the IPL has only set tongues wagging to the extent that it has now become a topic of a national debate: should Kohli focus only on Tests and ODIs?

After two first-ball ducks, Kohli made a scratchy 9 against Rajasthan Royals — his fifth single-digit score of the season — but what was more worrying was the manner of his dismissal to a short ball from Prasidh Krishna. “It’s just a matter of one innings,” has been the common notion but the wait has only got prolonged.

The Chetan Sharma-led national selection committee has been keeping a watch on the events with one selector present at every IPL game. The five-man committee hasn’t met so far but that doesn’t mean that they haven’t discussed anything informally.

There’s a school of thought that if the selectors don’t act now it might be too late for someone to be groomed at that crucial No.3 position before the showpiece event in October-November.

“Kohli’s form is a matter of concern considering he is a premier player. The selectors will need to speak to him since you can’t bench him after picking him in the squad. Some bit of clarity is needed in this respect as Dravid needs time at his disposal before the World Cup,” someone in the know of things said.

“If you look at certain aspects, he hasn’t really remodelled his T20 game according to the situation. He needs to move on and evolve with the times. There are players like Suryakumar Yadav, Shreyas Iyer and Rishabh Pant who can offer more diversified roles in that position. Simply put he has failed to be adventurous,” the source remarked.

Rohit Sharma’s form has also been in focus though that has largely been linked to Mumbai Indians’ non-performance. With no support at the other end, Rohit has failed to convert the starts. His dismissals have been more out of frustration but he has never looked out of sorts.

India’s next T20I series is at home against South Africa and it is almost certain that Kohli will be given a break. That means the former India captain will again join the squad during the tour of England in July.

Dravid has already made it known that he believes in having regular conversations with the cricketers to make them aware of the expectations and not “brush anything under the carpet”.

Dravid is always known to put things in the right perspective and some tough calls could provide another step in the right direction.

Kohli’s workload has always been a topic of discussion since he plays all three formats and is not getting any younger at 33. Under the circumstances, it wouldn’t come as a surprise if Kohli himself takes a call on his T20I career.