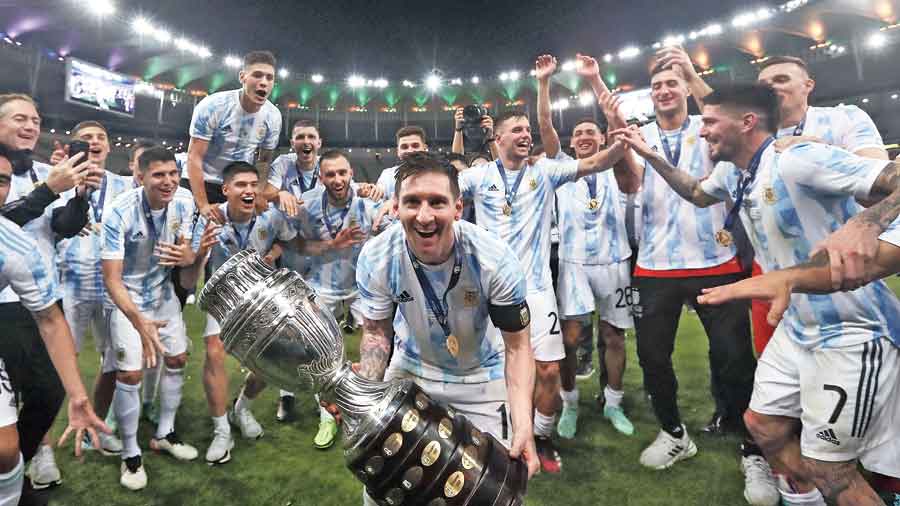 Lionel Messi and teammates celebrate with the trophy after beating Brazil in the final at the Maracana on Saturday
AP/PTI
The New York Times, Agencies   |   Published 12.07.21, 04:07 AM

Argentina triumphed. Lionel Messi cried. It was an emotion of relief and unbridled joy as he finally silenced doubters and ticked the last empty box in his glittering football career on Saturday night, leading Argentina past hosts Brazil, 1-0, in the final of the Copa América in Rio de Janeiro.

It was Brazil’s first defeat in a competitive game at the Maracana Stadium in Rio de Janeiro since their shock 2-1 loss to Uruguay in 1950 that cost them the World Cup.

Fans gather at the Obelisk in Buenos Aires, waving a Maradona-inscribed flag to celebrate the win
Getty Images

The trophy was Messi’s first with Argentina after a string of frustrating failures, including perhaps the most demoralising defeat of his career — against Germany in the World Cup final — at the same stadium in 2014. Three times previously he had played — and lost — in a Copa final: in 2007 to Brazil and to Chile in 2015 and 2016.

He couldn’t cry then but he did on the magical Saturday night at the Maracana.

When Uruguayan referee Esteban Ostojich blew the final whistle, a teary-eyed Messi — his relief palpable — dropped to his knees and was immediately surrounded by his teammates. Moments later, they were lifting him above their shoulders and tossing him in the air.

In more than a decade at the top of his sport, Messi, 34, has won nearly every soccer honour imaginable with Barcelona. But nothing with Argentina, except for the U-20 World Cup title in 2005 and a gold medal at the Beijing Olympics in 2008.

His friend Ángel Di María delivered the prize at last, putting Argentina ahead in the 22nd minute after coolly collecting a long cross-field pass to the right wing from midfielder Rodrigo De Paul and lifting it over Brazil’s goalkeeper Ederson into the net.

The goal was only the third the Selecao had allowed in the tournament.

Messi had carried Argentina over the last month in Brazil with four goals and five assists. But he had done that before, too, and then fallen short of ultimate victory.

The sting of repeated failures had seen Messi retire from the national team at least twice. But both times he had relented, and returned, to chase that first senior title. This month, Argentina’s players had made it their mission to deliver it.

“Messi is one step ahead of all of us,” Udinese’s De Paul had said before the semi-finals. “We are all on the same path. What matters is to win.”

Saturday’s game was the feisty, fiery affair everyone had expected from the two South America football superpowers.

Chasing the game, Brazil sent on a wave of attackers after halftime: Roberto Firmino came on at the break and was followed by Vinicius Júnior and Gabriel Barbosa.

Richarlison thought he had levelled the score in the 52nd minute when he ran on to a lead ball from Lucas Paquetá and slotted home a low shot. But replays showed that he had broken a split-second early, and the goal was disallowed for offside.

Two minutes later he was in again, onside this time, but his shot was stopped at close range by Argentina’s goalkeeper, Emiliano Martínez.

The chances kept coming, on both sides — even Messi stunningly blew a one-on-one in the goal mouth late in the game — but as the minutes ticked away, and as the tackles got rougher and the dives and the pleas for foul calls more emphatic, the score did not change.

Messi was, at last, a champion in Argentina’s blue and white. The World Cup in Qatar next year awaits the talisman.