Match marked by a tribute to Diego Maradona, who died in November last year 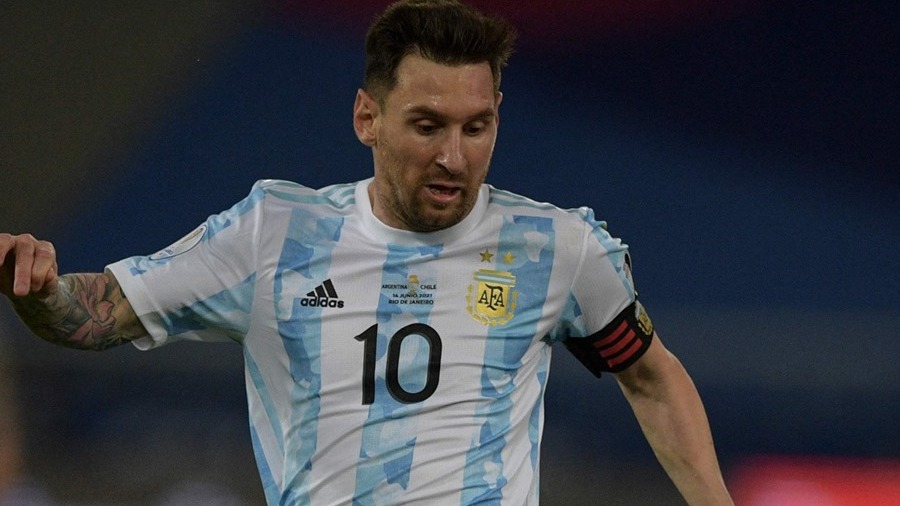 Lionel Messi played exceedingly well but that wasn’t enough for Argentina in their Copa America opener versus Chile.

La Albiceleste were held to a 1-1 draw at the Nilton Santos stadium in Rio de Janeiro. The match was also marked by a tribute to Argentine football great Diego Maradona, who died in November at age 60.

Messi, who turns 34 this month, might have one of his final chances of winning a title with Argentina at the Copa America.

He said ahead of the opening game that winning with his national team is the biggest dream of his career, despite all the individual success and club titles with Barcelona.

Coach Lionel Scaloni's lineup wasted three clear opportunities between the 16th and 18th minutes, one from Lautaro Martinez and two for Nicolas Gonzalez.

And then Messi opened the scoring in the 33rd after a free-kick that Chilean goalkeeper Claudio Bravo couldn't stop despite getting a touch on the ball to his left. Argentina continued to pressure Chile, who were without striker Alexis Sanchez.

But Chile transformed into a more attacking team in the second half and earned a penalty after a video review. Arturo Vidal’s shot from the spot was stopped, but Eduardo Vargas nodded it into the empty goal to level the scoring in the 57th.

Messi continued to create opportunities until the end of the match, but his teammates showed the same difficulty to deliver goals as they did in the 2-2 draw at Colombia in a World Cup qualifier in Barranquilla last week.

Brazil's health ministry has documented 41 cases of Covid-19 related to the Copa America, including 31 players or staffers and 10 workers who were hired for the event.

The ministry said in a statement that all workers who tested positive were in Brasilia, where Brazil kicked off the tournament on Sunday with a 3-0 win over Venezuela. The visiting Venezuela were depleted after nearly a dozen cases of Covid-19 involving players or staff.

Brazil stepped in late as emergency host of the 10-team continental championship despite the country having the second-highest number of recorded deaths from the coronavirus in the world, almost 490,000.

President Jair Bolsonaro offered to hold the tournament in Brazil only two weeks ago after Argentina and Colombia were dropped as co-hosts. He is a critic of social distancing policies and argues the economic impact of shutdown measures kills more than the virus.