Weightlifter's home in Manupur buzzing with relatives, friends and well-wishers 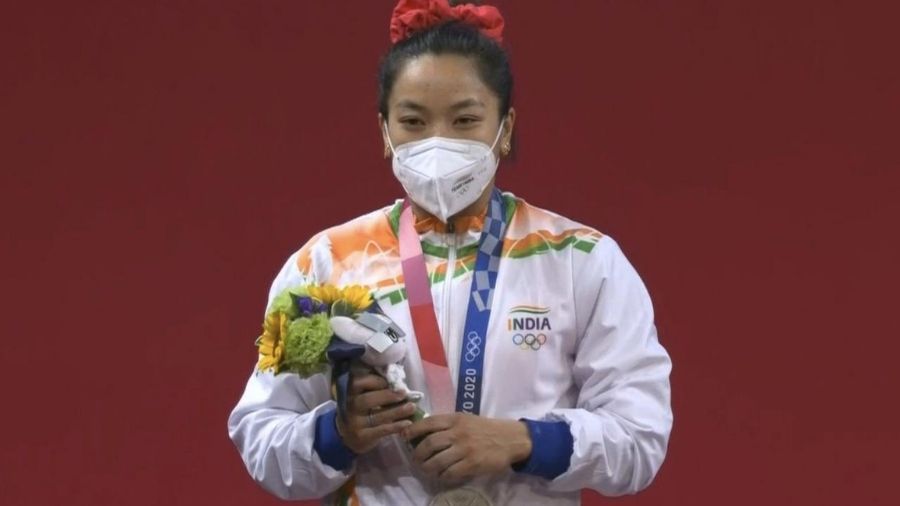 A historic silver medal and a radiant smile were not the only eye-catching things about Mirabai Chanu on Saturday in Tokyo, her gold earrings shaped like Olympic rings were as striking, a gift from her mother who sold her own jewellery for them five years ago.

The hope was that the earrings would bring her "good luck". It didn't happen in the Rio 2016 Games but Chanu made the little sacrifice count in Tokyo this morning with a silver medal and Saikhom Ongbi Tombi Leima has struggled to stop her tears from flowing ever since.

"I saw the earrings on TV, I gave them to her in 2016 before the (Rio) Olympics. I have made it for her from the gold pieces and savings I have so that it brings luck and success," Leima told PTI from her home in Manipur where a considerable number of relatives, friends and well-wishers gathered to watch Chanu script history in Tokyo.

"I was in tears seeing it and also during the moment she won the medal. Her father (Saikhom Kriti Meitei) was also in tears. Tears of joy. All her hard work has led to the success."

Chanu ended India's 21-year wait for a weightlifting medal at the Olympics, clinching the second place in the 49kg category to open the country's account on Saturday.

With this, she exorcised the ghosts of the 2016 Games where she had failed to log a single legitimate lift.

The Chanu household at Nongpok Kakching village, around 25km from state capital Imphal, visitors had been trickling in since Friday despite the curfew caused in part by the COVID-19 pandemic.

"She had told us she will win gold or at least a medal. So, everybody was waiting for it to happen. Many of our relatives who lived far came last evening. They stayed overnight with us," Chanu's mother said.

"Many came this morning and the people of the locality also thronged. So, we have brought out the television to the verandah and around 50 people were there to watch Mirabai in Tokyo. Many sat at the front courtyard. So, it was a kind of festival.

"A lot of journalists have also come. This is something we have never experienced."

The gold they had wished for didn't come but the silver was enough to send a packed courtyard, glued to the TV, into frenzy as the tense little crowd broke into celebrations, unclenching their fists and clapping frantically.

Chanu was on video call with her family from the weightlifting arena in Tokyo before her event began and she had sought blessings from her parents.

"She (Chanu) rarely comes home (because of training) and so we have made a whastapp group to communicate with each other," said Chanu's cousin Aroshini.

"This morning, she had a video call with all of us and she bowed down and sought blessings from her parents.

"She said 'bless me to win a gold medal for the country'. They gave their blessings. It was a touching moment."