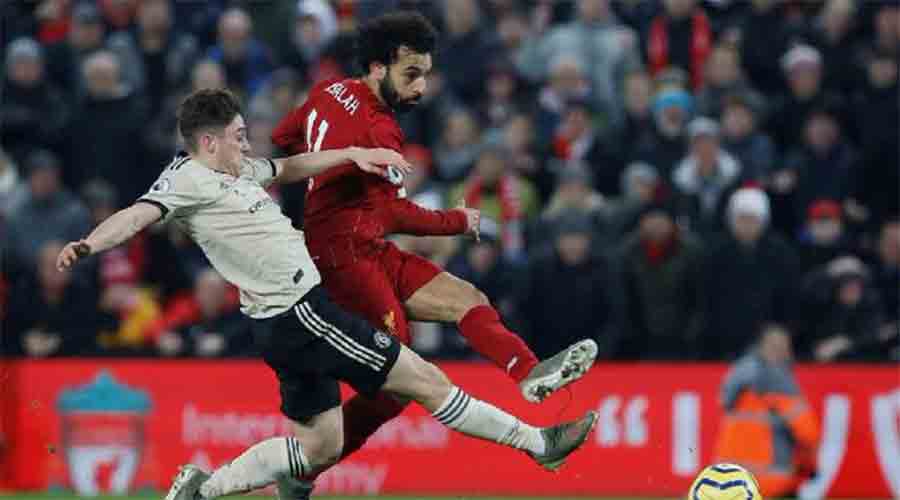 Liverpool’s Mohamed Salah netted a double, including the winner, as they secured a 3-2 victory over Atletico Madrid, whose forward Antoine Griezmann also scored twice but was sent off in a gripping Champions League clash on Tuesday.

Salah fired home the winner from the spot after Griezmann had seen red for a dangerous high boot, but the action was not over in a compelling encounter, with Atletico awarded a penalty of their own, before it was overturned following a VAR review.

The win kept Liverpool top in Group B on nine points, five ahead of second-placed Atletico and Porto in third, with AC Milan pointless at the foot of the table.

“Honestly, how you win it, I couldn’t care less. The dirty ones are the really important ones. When we are flying we win the games anyway, but on a night like this getting three points is really massive,” Liverpool boss Juergen Klopp said.

“At half-time, I think everyone in the stadium thought it was only going one way and we thought ‘let’s give it a proper try again,’” Klopp said.

“We played a really solid second half in a tough game with intense football from both teams. We got the penalty, then there was a red card and obviously it was in our favour,” Klopp explained.

There was no handshake between Klopp and his opposite number Diego Simeone at the final whistle, although the Liverpool boss said there was no bad blood between the two.

“I went to shake his hand. His reaction for sure, like mine, was not so cool, but we are both emotional. When I see him next time we will shake hands, definitely,” Klopp said.

“It’s nothing. He was obviously angry, not with me but with the game. There is nothing else.”

Salah opened the scoring with a deflected effort in the eighth minute and Naby Keita added a second with a thunderous volley five minutes later as Liverpool looked set to crush Diego Simeone’s side.

However, Liverpool’s defence imploded shortly afterwards and Atletico came roaring back, with Griezmann at the centre of the action.

First he steered home a Koke shot in the 20th minute to reduce the deficit and 14 minutes later he drew his side level, a superb first touch opening up the space in front of him for a clinical finish low past Alisson’s left hand.

After a frenetic opening 45 minutes, Liverpool finished the first half on the ropes, but a reprieve was not long coming as the second period got underway.

Yannick Carrasco forced an early save from Alisson but then Griezmann was shown a straight red card seven minutes after the break for carelessly planting his foot in the face of Roberto Firmino as he challenged for a high ball.

Former Liverpool striker Luis Suarez came off the bench and flashed a stoppage-time shot over the bar before being booked for an angry exchange with the referee as he sought to find an equaliser for his side.

With seven minutes of stoppage time added on, Liverpool were left hanging on, but they managed to see the game out.

Salah became the team’s top scorer in the Champions League with his penalty in the second half.

Salah took his tally in the competition for the club to 31 goals, surpassing the record of former captain Steven Gerrard, who had bagged 30.

Paris Saint-Germain’s Kylian Mbappe and Lionel Messi found their groove as they inspired their side to a 3-2 comeback victory at home to RB Leipzig. Mbappe was the first to strike and Messi had the France forward to thank for his second-half double after the Ligue 1 side had fallen 2-1 behind following goals by Andre Silva and Nordi Mukiele either side of the interval.

Mbappe, who missed a stoppage-time penalty, set up Messi for the equaliser and won the spot-kick that the Argentine converted with an ice-cool chip after what had been a lacklustre performance from the club’s new signing.

The result left PSG top of Group A with seven points from three games, one point ahead of Manchester City, who demolished Club Brugge 5-1 away earlier on Tuesday.

Before Mbappe and Messi linked up like two old teammates, PSG often looked out of sorts, incapable of dealing with Leipzig’s high pressure game.