Over-dependence on one player can sometimes spell doom and Mohun Bagan have learnt it the hard way. Injured Sony Norde's absence has made a huge difference to their fortunes this season, and on Tuesday, Mohun Bagan crashed to their first defeat in the I-League at their home ground. 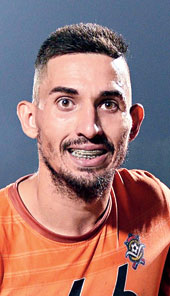 Calcutta: Over-dependence on one player can sometimes spell doom and Mohun Bagan have learnt it the hard way. Injured Sony Norde's absence has made a huge difference to their fortunes this season, and on Tuesday, Mohun Bagan crashed to their first defeat in the I-League at their home ground.

To make matters worse, Chennai City FC, who are placed eighth in the standings, were reduced to 10 men in the 36th minute of the match but Mohun Bagan failed to take advantage.

Jean-Michael Joachim scored in the fifth minute of play while Ansumana Kromah equalised from the spot nine minutes before the breather. Chennai City then scored in the 71st minute through defender Veniamin Shumeiko to seal three points.

"This is a historical match. We felt a 1-1 result would have been fair, but the 2-1 scoreline is a great achievement. We dedicate it to our fans in Chennai," Soundararajan remaked.

Chennai City started with a flourish and tried to maintain the momentum almost right through while Mohun Bagan looked rudderless and lost for ideas. While Dipanda Dicka was bottled up, Kromah was the lone man upfront who stood out. He could have added another goal to his tally had the crossbar come in the way.

"Mohun Bagan are a well-organised team, but they seemed to lose ball possession early," said the Chennai City coach.

Mohun Bagan, in fact, should consider themselves to be lucky not to concede a third goal when Man of the Match Murilo Ribeiro de Almeida's shot hit the crosspiece.

Mohun Bagan could have taken the lead in the second minute but Dicka failed to capitalise on Kromah's back heel. Frenchman Joachim struck after being placed in the clear by Murilo, who snatched the ball away from Sourav Das. The under-22 defender failed to recover from the mental block in his first I-League start and committed few silly mistakes before being replaced in the 25th minute.

Chennai City were reduced to 10 men when Pradeep Mohanraj was given marching orders for intentionally handling a goal-bound shot. Kromah scored from the resultant penalty.

Mohun Bagan's forays though dried up and a lack of constructive moves made the visitors' task easier.

Chennai City mainly relied on counterattacks though the winning goal came from a corner kick. Soosai Raj was floated it perfectly into the box and Shumeiko rose above the rest to head in to the dismay of the home crowd.

Mohun Bagan seemed resigned to their fate after this goal and there was no attempt to take responsibility in making a comeback.