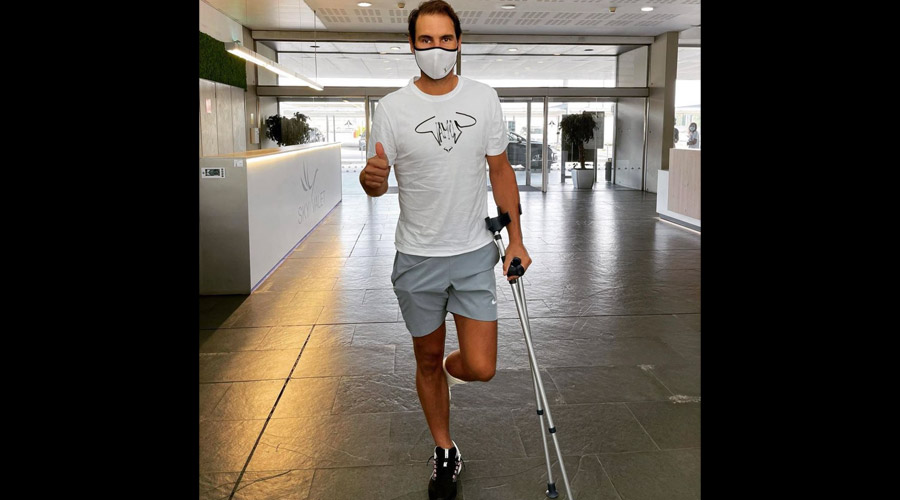 Just about five months ago, Rafael Nadal had posted on social media a photograph of himself on crutches after a medical procedure. Cut to Sunday and the 35-year-old Spanish great will be within striking distance of a record 21st grand slam title when he meets his Russian challenger, Daniil Medvedev, in the Australian Open men’s singles final in Melbourne.

That’s quite an incredible journey for the man who has built his legacy with tales of grit and fight.

A second triumph at Melbourne Park for 2009 champion Nadal will break a three-way tie for the most major titles in the men’s game, with the Spaniard nosing ahead of rivals Novak Djokovic and Roger Federer.

Nadal chose to play down the hype. “I just feel happy to be part of this amazing era of tennis... In some ways it doesn’t matter if somebody achieves one more or one less,” he said. But whoever follows tennis, knows the gravity of the occasion.

It’s interesting to note that the day Nadal posted that photograph, on September 11, Medvedev was booking a spot in the US Open final.

The difference between the two players is of course generational and also much more. Medvedev, a decade younger, is a dominant player on hard courts and had also beaten Nadal the last time they met, in the ATP finals in 2020. “If I’m not able to play at my top level, (I) simply will be (sic) no chance,” Nadal said.

Sport revels in uncertainty and the fact that it is Nadal who is at the moment closer to the 21st grand slam title, and not Djokovic, is in itself a fascinating story. Five months ago, few would have believed in such a possibility.

Besides the foot problem, the Spaniard was also down with Covid-19 in December and though he never imagined playing in the decider in Melbourne when he arrived at the start of the month, the court will be all his to script a fairy-tale ending to his incredible story in Melbourne.

But world No. 2 Medvedev, much like Nadal, is known to defy the script. He ruined Djokovic’s dreams in New York. He is threatening to do the same against Nadal in Melbourne on Sunday.

“I’m happy to have the chance to try to stop one more time somebody from making history. It’s not me going for the 21st, not me trying to break these records. I’m going for my second one,” Medvedev said in a tone of practicality.

Nadal will go into the Rod Laver Arena contest with a 3-1 overall lead in previous meetings. A win for Nadal will give the much decorated ‘old guard’ belief that their time is not up yet. A win for Medvedev will cement his status as the leader of the next generation.

Perhaps, it’s a win-win scenario for all tennis lovers.