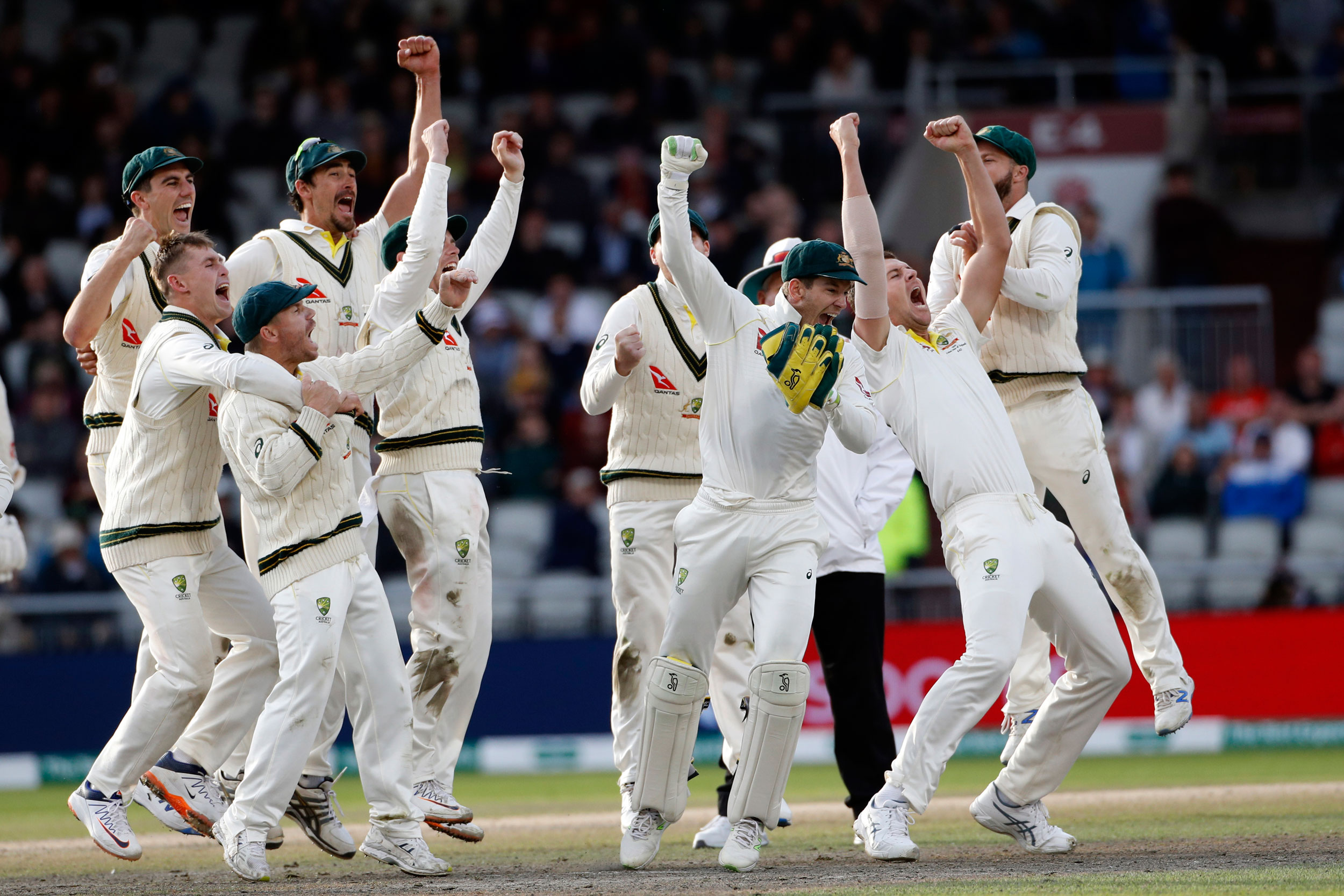 Australia retained the Ashes after beating England by 185 runs in the final session of the fourth test at Old Trafford on Sunday.

Josh Hazlewood claimed the winning wicket, trapping Craig Overton lbw, as Australia dismissed England's second innings for 197 deep into the evening session to take a 2-1 lead in the five-match series.

As the holder, Australia only needs to draw the series to keep cricket's famous urn.

'We've retained it, we haven't won it,' Australia captain Tim Paine told the BBC. He added: 'We'll have a bloody good night together.'

The fifth and final test in cricket's oldest regular international series starts Sept. 12 at The Oval.

Australia star batter Steve Smith was player of the match — and the major difference between the two teams — with scores of 211 and 82.

Jack Leach, who scored a 51-ball 12, was promoted to No. 10 and batted for an hour with England fans hoping for a repeat of his third test heroics, or even bad light.

Australia held on to the Ashes in England for the first time in 18 years. It thrashed England by 251 runs in the opening test at Edgbaston, the second test at Lord's was drawn before England won at Headingley by one wicket to level the series 1-1.

'Bitterly disappointed,' England captain Joe Root said, 'to come so close to taking it to The Oval is quite hard to take.'

Pacer Pat Cummins finished with 4-43 off 24 overs. He bowled Jason Roy (31) in the 18th over of the day, knocking over his off stump, and then claimed the key wicket of Ben Stokes, hero at Headingley with Leach. The England all-rounder got an inside edge and was well caught behind the wicket by Paine. Stokes, who had scored just one, did not wait for a decision from the umpire and walked as Australia appealed.

That left England in deep trouble on 74-4.

Joe Denly brought up his half-century after lunch with a crisp off drive off Cummins. It was his sixth boundary and took him to 53 off 112 balls. He fell without adding further to his score when he was caught out by the bounce from a delivery from Nathan Lyon (2-51) and offered a catch to Marnus Labuschagne at short leg.

Jonny Bairstow and Jos Buttler came together and steadily took the score to 138-5 after 53 overs as Paine turned to part-time bowlers Labuschagne and Travis Head in the hope of breaking their concentration.

But it was Starc (1-46) that made the next breakthrough when he won an lbw verdict against Bairstow for 25. That left England 138-6, with Australia needing just four more wickets to retain the Ashes.

Australia thought it had removed Overton with the first ball after tea as Labuschagne grasped a catch fielding close to the bat but the ball had hit the body.

Buttler misjudged the line off Hazlewood (2-31) and was bowled leaving the ball. His removal for 34 left England 172-7 and needing a rearguard from the tail.

Jofra Archer did not last long, scoring only one before being trapped lbw by Lyon with a ball that kept low.

Overton formed a stubborn ninth-wicket partnership with Leach, taking the score to 195-8 off 85 overs, with 20 remaining in the day.

Australia was unhappy with what they perceived as time-wasting tactics from the England pair but Leach's resistance came to an end after Paine turned to Labuschagne's leg-spin.

Leach offered a simple catch to Matthew Wade close in.

The game ended when Hazlewood trapped Overton lbw, ending his stubborn innings of 105 balls for 21. The England man called for a review but the decision stood.